Gerry Georgatos - Western Australia’s Canning Basin (photo abc.net.au) will soon be talked about as the next resources mining frontier. The James Price Point $40 billion gas hub proposal for all intents and purposes has been dumped but the State’s Premier, Colin Barnett, will pitch the extraction of natural gas from the Canning Basin as the way to go in the pursuit of State revenue. Most of the gas will be exported.

The shale gas deposits of the Canning Basin are among the richest in the world.

On Tuesday, Premier Barnett introduced a Parliamentary Bill seeking to develop the vast Canning resource. The Bill will formalise the agreement between the Government and the venture partners Buru Energy and Mitsubishi Corporation.

The Stringer has been following the potential of the Canning Basin shale gas development since February and on May 1 published ‘The Gas Wars’ - http://thestringer.com.au/the-gas-wars-2/#.UYtjl7WnCaU. The Stringer reported in The Gas Wars that despite Premier Barnett’s bent on the James Price Point gas hub proposal and its unlikelihood that “he is also bent on extracting every other resource in the region and from nearby regions.”

“He is not only bent on extracting every cubic foot of the 13 trillion cubic feet of natural gas estimated in the Browse Basin but also hundreds of trillions of cubic feet of gas from the wider Canning Basin.”

“A port at James Price Point has always been part of the dream, exporting the Kimberley’s processed resources to the world, particularly to nearby China. If a port is dredged up, it will quickly rival Australia’s busiest port, Port Hedland.”

“Where Browse Basin is estimated to have 13 trillion feet of gas it is believed the Canning Basin could have up to 20 times.”

The financial incentives to the State are huge.

The Canning Basin has been studied for quite some time and has been recognised for its prospective oil and gas capacity. Hundreds of well have been drilled but the Basin covers approximately 506,000 square km.

Buru Energy has the biggest share of the Canning Basin tenements. It was also a strong performing company on the ASX in the past year.

Buru is planning a $500 million pipeline that will link its tenements with the domestic gas network in the Pilbara. This will call for more infrastructure building opportunities and herald demands on the Kimberley.

“This legislation will bring about continued exploration for natural gas in the remote Canning Basin, the development of a gas pipeline to the Pilbara and the ensure Western Australian consumers have first use of any gas discovered,” said Mr Barnett.

The joint venture partners subject to finding viable gas reserves to extract in the Basin by 2016 they will then be required to submit a plan to develop to a domestic gas hub which will need to include the pipeline to the Pilbara.

Premier Barnett pointed out, “This gas is located onshore, (therefore) it is also entirely owned by the State Government.”

He argued that Western Australia’s domestic gas supplies would be met before any exports.

But the Conservation Council of Western Australia (CCWA) alongside other environmental groups is concerned that shale gas may involve hydraulic fracturing (fracking) which has been shown to damage groundwater systems and pollute waters.

The CCWA warned that the State Government could be repeating the mistakes it made with James Price Point by rushing into a major knew industrial gas fracking project in the Kimberley that risks what it argued as irreversible damage to the region.

The CCWA that despite all the serious concerns about gas fracking that legislation has been introduced to Parliament that commits the State “to becoming a proponent of major gas fracking developments in the Kimberley.”

CCWA Climate and Energy program manager Jamie Hanson said “this legislation is a red carpet welcome to industrialisation of some of the most precious parts of Western Australia.”

“Shale gas fracking is a highly risky technology in which chemical cocktails are pumped at high pressures into gas bearing rock in order to crack them and release trapped gas. The process comes with severe risk to human health, groundwater, and the environment.”

“A string of reports by leading international agencies have reiterated that the risks to water, health and environment of shale gas fracking are very high. Groundwater will be polluted as wells being to fail – as they do.”

“Indeed, reports have shown that over half of gas wells fail inside 30 years, creating pathways for dangerous water pollution to contaminate groundwater.”

“The legislation will open precious places like Roebuck Plains and the Fitzroy River valley region to irreversible damage by thousands of gas fracking wells.”

“The introduction of this Bill pre-empts proper access and risks serious and ongoing conflict within both the Kimberley community, and more broadly in Western Australia,” said Mr Hanson.

“No environmental assessment of gas fracking in the Kimberley has been conducted.”
Without the assessments there is a risk that the Kimberley could “be turned into a polluted gas field.”

“We urge the State Government to follow due process, including at a minimum conducting detailed assessment of the environmental impacts of gas fracking in the Kimberley.” 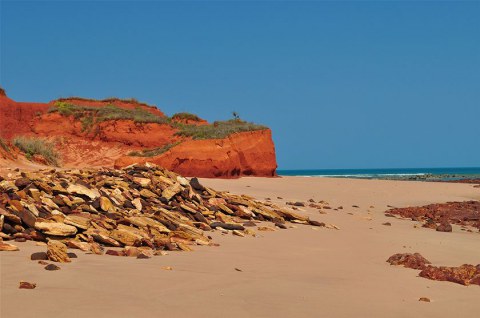 Time to stop CSG in its tracks

After a string of media exposes on coal seam gas, this campaign is really taking off right now on CommunityRun, GetUp's project to allow anyone to start their own grassroots campaign. Check it out and join in below.

I started this campaign because I've seen what unchecked mining companies are doing to my community here in QLD. Coal Seam Gas is exploding (sometimes literally) right across the country. I think it's one of the greatest threats to our future.

The profits of multinational fossil fuel companies is being put before the livelihoods and well being of our communities. Too much good farmland has been lost. Too much of our water has been contaminated by fracking chemicals. Too many local landowners have had their rights taken away.

In an election year, we need community campaigns to show all the major parties that demand they take this seriously. Please add your name.

Thanks so much for signing my petition to stop CSG over the last week. Over 22,000 people signed the petition in just a few days! It is clearly time for politicians at all levels to listen to this movement!

I wanted to make sure you all know about the Lock the Gate 'Call to Country' as well.

Lock the Gate supporters all over the country are working in their local communities and meeting their politicians to demand they take action to protect our land, water and future. We should all be part of it!

You'll be able to join with others in your community to meet with your local member of parliament.

Every politician needs to know that what is going on can't continue and that we need to stop Coal Seam Gas now!

Just to be clear Lock the Gate did not start this petition but I think we should combine efforts and truly become a stronger movement together.

p.s. Make sure you also sign up for the Lock the Gate newsletter as well!

Stop the laws that will turn the Kimberley into toxic gasland

Imagine if your drinking water was contaminated by chemicals, your air was polluted with toxic emissions, and your land was overtaken by gas fracking rigs and chemical waste ponds. Imagine then finding out that your State Government was supporting this industry with special legislation, subsidies, and exemptions from environmental controls.
This is already the everyday reality for people living in shale gas fracking fields in Pennsylvania USA. And if we don’t take urgent action now, it could be the future for the Kimberley - one of the most special places on Earth right on our doorstep.
Help stop the Kimberley from becoming a polluted gasfield
Why is this so urgent? Last week, the State Government introduced legislation into the WA Parliament to promote the development of thousands of gas fracking wells across the Kimberley. Without consultation or environmental assessment, the proposed laws would open up the vast and spectacular Kimberley region to toxic gas fracking at a scale never seen before in Australia.
In his rush to see this legislation passed as soon as possible, Premier Barnett has even attempted to suspend usual Parliamentary process in an attempt to rush the bill through.
Send an urgent message asking your local Member of Parliament to vote this appalling legislation down
Shale gas fracking is a highly risky process. A cocktail of chemicals are pumped underground at extreme pressures- high enough to fracture deep underground rocks to release trapped gas.
When I visited gas fracking sites in the USA recently I was horrified. I met sick families who could not move off their land. I saw gas bubbling out of farm drinking water supplies that could be lit on fire. I met regulators who were turning a blind eye, and I saw the gas industry’s armed security guards preventing farmer’s access to their own land. After seeing this, I vowed I would do whatever I could to stop this happening in Western Australia.
Please take action now to stop the Kimberley being turned into a toxic gasland. If this legislation is passed unopposed, then the gas industry will have a red-carpet welcome to pollute and destroy one of the most precious places on Earth.
Find out more about shale gas fracking at www.cleanwaterhealthyland.org.au
Regards,
Piers Verstegen,
Director CCWA.
P.S. Will you support the campaign to stop gas fracking in WA? Make your tax-deductable donation here
CCWA
Telephone: (08) 9420 7266