Our proposal for changing the system and not the climate

To reclaim our future, we must change the present.

The capitalist system has exploited and abused nature, pushing the planet to its limits, so much so that the system has accelerated dangerous and fundamental changes in the climate.

Today, the severity and multiplicity of weather changes – characterized by droughts, desertification, floods, hurricanes, typhoons, forest fires and the melting of glaciers and sea ice – indicate that the planet is burning. These extreme changes have direct impacts on humans through the loss lives, livelihoods, crops and homes all of which have led to human displacement in the form of forced migration and climate refugees on a massive an unprecedented scale.

Humanity and nature are now standing at a precipice. We can stand idle and continue the march into an abysmal future too dire to imagine, or we can take action and reclaim a future that we have all hoped for.

We will not stand idle. We will not allow the capitalist system to burn us all. We will take action and address the root causes of climate change by changing the system. The time has come to stop talking and to take action.

We must nurture, support, strengthen and increase the scale of grassroots organizing in all places, but in particular in frontline battlegrounds where the stakes are the highest.

Leave more than two thirds of fossil fuel reserves under the soil, as well as beneath the ocean floor, in order to prevent catastrophic levels of climate change.

Support a just transition for workers and communities away from the extreme energy economy and into resilient local economies based on social, economic and environmental justice.

End the dominance of export-based industrial forms of food production, (including in the livestock sector), and promote small-scale integrated and ecologically sound farming and an agriculture system that ensures food sovereignty, and that locally grown crops meet the nutritional and cultural needs of the local community. These measures will help to cool the planet.

Stop land grabbing and respect the rights of small farmers, peasants and women. Recognize the collective rights of indigenous and tribal peoples consistent with the UN Declaration on the Rights of Indigenous Peoples, including their rights to their lands and territories.

Recover the control of the public sources to finance projects for people and nature like health, education, food, employment, housing, restoration of water sheds, conservation and restoration of forest and other ecosystems and others and stop the subsidies to dirty industries, agribusiness and military industry.

Take cars off the roads by building clean public transport infrastructure that is adaptive to local, non-combustion energy sources, and make it accessible and affordable to everyone.

Promote local production and consumption of durable goods to satisfy the fundamental needs of the people and avoid the transport of goods that can be produced locally.

Stop and reverse corporate driven free trade and investments agreements that promote trade for profit and destroy the labor force, nature and the capacity of nations to define their own policies.

Stop the corporate capture of the economy and natural resources for the profit of Transnational Corporations.

Dismantle the war industry and military infrastructure in order to reduce the greenhouse gas emissions of warfare, and divert war budgets to promote genuine peace.

With these measures we will be able to achieve comprehensive employment for all because built into this systemic change there will be more and better quality jobs than currently exist within the capitalist system. With these measures we will be able to build an economy that serves the people and not the capitalists. We will stop the endless degradation of the earth’s land, air, and water and preserve the health of humans and the vital cycles of nature. We will avoid forced migration and millions of climate refugees.

System change requires an end to the global empire of transnational corporations and banks. Only a society that has the type of democratic control over resources which is based on workers (including migrant workers), indigenous and women’s rights and respects the sovereignty of the people will be able to guarantee economic, social and environmental justice. System Change requires a break from the patriarchal society in order to guarantee women’s rights in all aspects of life. Feminism and ecology are key components of the new society that we are fighting for.

We need a new system that seeks harmony between humans and nature and not an endless growth model that the capitalist system promotes in order to make more and more profit. Mother Earth and her natural resources cannot sustain the consumption and production needs of this modern industrialized society. We require a new system that addresses the needs of the majority and not of the few. We need a redistribution of the wealth that is now controlled by the 1%. And we also need a new definition of wellbeing and prosperity for all life on the planet under the limits of our Mother Earth.

While there will still be a battle inside the international UN climate negotiations, the main battlegrounds will be outside and will be rooted in the places where there are frontline struggles against the fossil fuel industry, industrial agriculture, deforestation, industrial pollution, carbon offsets schemes, and REDD-type carbon offsets projects, all resulting in land and water grabbing and displacements taking place all over the world.

The United States, Europe, Japan, Russia and other industrialized countries, as the main historical carbon emitters, should implement the biggest emissions reductions. China, India, Brazil, South Africa and other emerging economies should also have targets for emission reductions based on the principles of common but differentiated responsibility. We do not accept that on behalf of the right to development several projects for more unsustainable consumption and exploitation of nature are being promoted in developing countries only to benefit the profits of the 1%.

The fight for a new system is also the struggle against false solutions to climate change. If we don’t stop them they will disrupt the Earth’s System and deeply affect the health of nature and all life. We therefore reject techno-fix “solutions” like geo-engineering, genetically modified organisms, agrofuels, industrial bioenergy, synthetic biology, nanotechnology, hydraulic fracturation (fracking), nuclear projects, waste-to-energy generation based on incineration, and others.

We are also in opposition to those proposals that want to expand the commodification, financialization and privatization of the functions of nature through the so-called “green economy” which places a price on nature and creates new derivative markets that will only increase inequality and expedite the destruction of nature. We cannot put the future of nature and humanity in the hands of financial speculative mechanisms like carbon trading and REDD. We echo and amplify the many voices that are urging the European Union to scrap the EU Emissions Trading Scheme.

REDD (Reducing Emissions from Deforestation and forest Degradation), like Clean Development Mechanisms, is not a solution to climate change and is a new form of colonialism. In defense of Indigenous Peoples, local communities and the environment, we reject REDD+ and the grabbing of the forests, farmlands, soils, mangroves, marine algae and oceans of the world which act as sponges for greenhouse gas pollution. REDD and its potential expansion constitutes a worldwide counter-agrarian reform which perverts and twists the task of growing food into a process of “farming carbon” called Climate Smart Agriculture.

We must link social and environmental struggles, bring together rural and urban communities, and combine local and global initiatives so that we can unite together in a common struggle. We must use all diverse forms of resistance. We must build a movement that is based on the daily life of people that guarantees democracy at all stages of societies.

Many proposals already contain key elements needed to build new systemic alternatives. Some examples include, Buen Vivir, defending the commons, respecting Indigenous territories and community conserved areas, the rights of Mother Earth – rights of Nature, food sovereignty, prosperity without growth, de-globalization, the happiness index, the duties to and rights of future generations, the Peoples Agreement of Cochabamba and others.

We have all long hoped for the possibility of another world. Today, we take that hope and turn it into courage, strength and action – that together, we can change the system. If there is to be a future for humanity, we need to fight for it right now.

Signed by the facilitators of the Climate Space:

International Women’s Day. 08 March 2013. Philippines. Today, we celebrate our hopes, our rights, our voices, our movements as we continue to work towards the elimination of violence and discrimination, our right to self-determination, our right to decide on our bodies, communities and natural resources. We voice out the development we want. We move towards equality and justice. We dance until we are all free.

MINING POISONS our food and waters – mine tailings seeping through the water system, backhoes excavating our rice fields, coastal areas and mountains. Women toil more than twelve hours a day to produce and secure food for their families, to bring water to their homes, to gather medicines from their forests. Women regard the land and water as source of life; but yes, mining corporations easily disregard the value of life.

MINING DISPLACES rural women – away from their homes, their farms, their municipal waters, their forests. With diminishing sources of income due to degradation of their natural resources, rural women have to find work in the cities or abroad, with the risk of falling prey to trafficking and prostitution. Women are driven away from their families and communities; but yes, mining corporations easily disregard the value of family and community.

MINING WORSENS prostitution – peddling entertainment to investors and their male workers, peddling women next to the produce of the mines. Young women get attracted to jobs near the mining areas, many fall victims to empty promises of better incomes at the cost of their bodies and dignity; but yes, mining corporations easily disregard a person’s dignity.

MINING EXPLOITS workers – subjecting them to inhuman conditions and various risks to health and danger without any occupational safety hazards, without security of tenure, without decent pay. The government promotes mining for job creation but it has not delivered any impact on employment; but yes, mining corporations easily disregard the dignity of work.

MINING KILLS indigenous women – Juvy Capion’s and Cheryl Ananayo’s children sleep at night grieving the loss of their mothers, whose last cries were for their ancestral domains. Indigenous women laid their lives for their ancestral lands not because they wanted to merely benefit or profit from it, but because they wanted to protect the ties that bind them as a people, their cultural identity and integrity. This is the reason why there is the free prior informed consent (FPIC) that would protect indigenous communities from threats of encroachment; but yes, mining corporations easily disregard the right to self-determination, and bastardize the very spirit of FPIC.

With all its dominance and violence, corporate mining perpetuates patriarchy. It has deprived women’s voice to be heard in the communities. It has justified militarization in the country side. With all its capitalist greed, multinational mining corporations perpetuate wanton exploitation of the environment, and undermines national sovereignty. It has worsened impacts of climate change. It has threatened food sovereignty and national patrimony. But mining corporations cannot do it by themselves; but yes, government has long been by their side.

Today, in one voice, women from different communities, and languages, say –

Pursue a development path that uplifts the dignity and lives of the Filipino communities, nurtures the natural resources and environment, and eliminates all forms of violence against women. 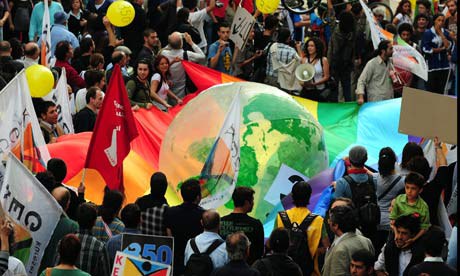 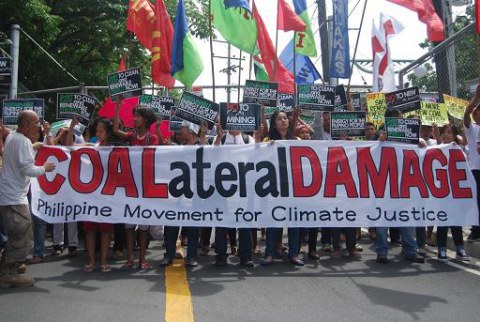 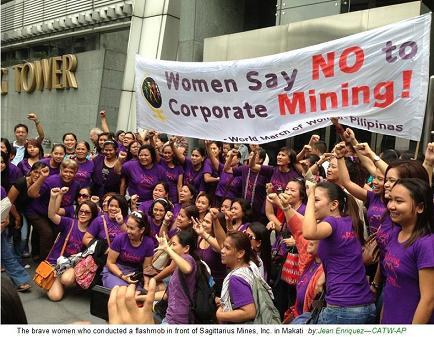