In a climate change protest over Australian coal exports, Greenpeace activists boarded a bulk coal carrier while navigating through the Great Barrier Reef on 23 April 2013. The ship, the MV Meister, had just loaded coal from Abbot Point, located 25km north of the town of Bowen on the central Queensland coast.

Using the Rainbow Warrior to launch high speed inflatables, the six activists were able to match the speed then clamber aboard the bulk coal carrier, where they unfurled a banner saying "End the Age of Coal".

The Rainbow Warrior radioed the MV Meister that 6 volunteers were boarding the vessel as a peaceful protest. "They will not interfere with your ship or it's equipment and will remain on deck." The six activists are citizens of Australia, India, the US, China, and New Zealand.

In a statement from the deck of the MV Meister, a Greenpeace spokeperson said "This morning, 6 Greenpeace volunteers have climbed on board a coal ship that left Abbot Point last night loaded with Australian coal bound to be burnt in the power stations of Asia. We've established a peaceful protest on board this ship because the Australian Government has utterly failed to do anything to reduce our biggest single contribution to climate change, which is our coal export industry." (Youtube video)

Both Labor and Liberal/National Parties support the major expansion of coal mining and coal exports in Australia. The contribution that exported coal makes to greenhouse gas emissions far outweighs the target of 5 per cent reduction of domestic emissions by 2020 that both sides of politics have endorsed and committed to.

"Our scientists and political leaders have all said climate change is a problem that we must address now," said Greenpeace Australia senior climate campaigner Dr Georgina Woods, "yet our coal exports continue to grow."

One of the activists who boarded the bulk carrier was Arpana Udupa, Climate and Energy Campaigner from Greenpeace India. She said "India needs to look beyond coal - whether it comes from Australia or India, Renewable energy and energy efficiency has far more to offer my country that does Australia's coal. With 72% of India's 1.2 billion population vulnerable to climate change, it is not in India's interest for the Great Barrier Reef to be destroyed and climate change sped up by Australia's coal exports."

According to a research report (Point of No Return) commissioned by Greenpeace and published in January 2013 (see Guardian report) Australia's coal export expansion is the second biggest of fourteen proposed fossil fuel enterprises that will push the world beyond agreed global warming limits.

To restrain carbon emissions to keep within the agreed climate warming limit of 2 degrees C, means that 80 per cent of known fossil fuels will need to be kept in the ground, unexploited. However, stock exchange valuation of mining and energy companies is based upon these fossil fuels being fully used - a giant carbon bubble likely to plunge the world into another financial crisis, according to the Guardian newspaper. This new report from Carbon Tracker and the Grantham Research Institute - Unburnable carbon 2013: Wasted capital and stranded assets - reveals that "Between 60-80% of coal, oil and gas reserves of publicly listed companies are 'unburnable' if the world is to have a chance of not exceeding global warming of 2°C".

United States Greenpeace activist, Harmony Lambert, who also climbed aboard the coal ship, said: "The coal industry has directly impacted communities in the US through mountaintop removal, coal pollution and dangerous waste storage sites, but the burning of coal is not just a local issue," said Ms Lambert. "Coal is the largest contributor to climate change around the world - both the United States and Australia needs to stop exports of this dangerous commodity."

Greenpeace Australia outlined in a statement why they resorted to civil disobedience:

Right now there is no political solution to this problem because all the major political parties have committed to doubling and trebling our coal exports. So, in the absence of any action being taken by our political leaders, Greenpeace is calling on all Australians to join it in physically preventing the expansion of coal, through peaceful civil disobedience.

The activists on board the bulk carrier, MV Meister, are not just Australian. In recognition of the global problem created by Australia's coal exports, we have a multinational team peacefully occupying a coal shipment as representatives of a region-wide campaign to bring about the end of the age of coal.

Greenpeace has campaigned against the expansion of coal exports from Queensland, through the Great Barrier Reef, using every legitimate means we can to stop them going ahead. We've made detailed submissions, triggered Departmental inquiries, used Freedom of Information to expose holes in assessments, helped 25,000 people make submissions to processes, published full page advertisements and written large on a beach our call to protect the Reef from coal. To no avail: our governments have not acted to protect the Reef or prevent the expansion of our biggest contribution to climate change.

It's well known that most coral reefs around the world are unlikely to survive with more than 1.5 degrees of average global warming: right now, the planet is heading decisively for four degrees warming. As Australians, our contribution to saving our Reef from this global problem is to stop increasing our biggest contribution to it. As international citizens, we cannot sit by and watch coal consumption and supply grow, and not do everything in our power to prevent it. 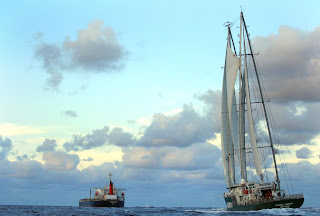 After 28 hours protest aboard the bulk carrier, the activists were transferred back to the Rainbow Warrior this morning in the Coral Sea. The bulk carrier is headed for South Korea, while the activists are on their way to Cairns in north Queensland.

"Despite our protest, despite all of the rational reasons to end the age of coal, the industry and our Government plays deaf and blind to the growing threat of climate change.

"This is just the beginning. It is clear to us that we have widespread community support to wage a campaign of peaceful civil disobedience against coal, to stop it from inflicting irreversible harm on Australia. It is clear, too, that many more Australians need to join us, putting ourselves on the line to stop coal, if we are to halt this juggernaut."

"The ship we boarded has continued on its way to South Korea. We are returning to Australia to show this country that we are not daunted: we will continue to disrupt, oppose and fight the expansion of coal, in the interests of the country and all our futures."

Takver is a citizen journalist from Melbourne Australia who has been writing on climate change, science and protests since 2004.