The Stringer's interview with Tony Abbott

The Leader of the Coalition, Tony Abbott has drawn up a “must do list” he said he would implement from the first day he became Prime Minister to deliver Aboriginal peoples from abject poverty.

Read the whole interview at http://thestringer.com.au/prime-minister-of-indigenous-affairs-tony-abbo... 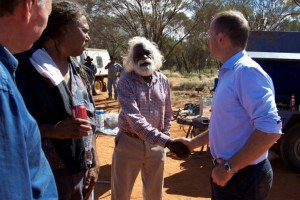 The metaphor of poisoned flour springs to my mind about Abbott

Given his hostility whenever Aboriginal rights were raised in the past, the
metaphor of poisoned flour springs to my mind whenever I hear Tony Abbott
voicing his concerns for the welfare of Aboriginal people.

Over 30 odd years in business,I adopted a rule that I don't deal with
dishonest people, and to my eye, Abbott is the epitome of the practised liar
on many issues.

As Bart Cummings says, "Let your brain register what your eyes see" .

It's time that Aboriginal people and many other disavantaged groups started
looking at Abbott's track record on issues of justice and fairness and not
what he is saying now in a scramble to become PM.

Remember he said himself that what he says should not necessarily be
believed, only what he writes, and he is backtracking on much of what he has
written as well when he claims concern for disadvantaged groups.

All he did during the 11 years of the Howard government was attack them.

Murdoch has anointed Abbott and is slipstreaming his efforts

Laurie - truer words haven't been uttered. Abbott is getting away with all sorts of behaviours and posturing and promises because his man in the media, Murdoch, has annointed him and is slipstreaming his efforts to get into the seat of policy power. There might not be dead schoolgirls in Murdoch's Australian media closet, unlike in Britain, but there is a damaged and compromised 'democracy' and political process. Greg