The Stringer went live February 20. Some of our stories from the last week include:

15 year old girl sentenced to 100 lashes for being raped

In the tourist mecca of the Maldives, a teenage girl who was repeatedly raped by her stepfather has been sentenced to 100 lashes.

The Prime Minister’s Apology to Victims of Forced Adoption

Today, Prime Minister Julia Gillard delivered a national apology on behalf of the Australian Government to all Australians affected by removal policies and practices from 1932 to 1982 which resulted in forced adoptions. The exact figure of how many children were removed remains unknown but it is estimated that as many as 225,000 babies were.

In Western Australia in 1989 880 people were prescribed stimulant medication (for ADHD). By the year 2000 this had increased to 20,648, with the WA Health Department estimating 18,000 prescriptions having been issued to children. By 2002 WA prescription rates were amongst the highest in the world, exceeding the US national average.

Yolnu youth should not be finishing up in prison

Richard Trudgen is a community development educator in the Arnhem who is worried that the rule of law has become too confusing for the Northern Territory’s Aboriginal peoples. He is concerned that the Yolnu people of Elcho Island are being treated with indifference and heavy-handedness by the NT Intervention authorities and by the NT police.

Arnhem Land Traditional Owners call for an end to fracking

Arnhem Elders and landowners are calling on the Northern Territory and Federal Governments to halt fracking in the Arnhem – on land and seas.

From Secret Country to Forgotten Peoples

WA has the nation’s highest median income – per capita it is the richest State in the Commonwealth of Australia yet it has the highest homelessness rate in the nation. Its poorest people – most of them Aboriginal – have not benefited from the mining boom.

Once again the United Nations has ranked Australia second behind Norway in its annual Human Development Index – for public health, social wealth, education, even happiness. But if Aboriginal peoples go stand-alone they would not be part of that 2nd rating – they would be 122nd.

Your feedback, news tips, ideas for stories and your own submissions are welcome – either email us or phone 0430 657 309.

To unsubscribe from this list please email contact@thestringer.com.au with “unsubscribe” as the subject line.

PS - It is 10 years on since the invasion of Iraq. The Stringer recommends the half hour comprehensive coverage on the War on Iraq by 3CR's Radioactive Show - which goes national every Saturday morning via the community radio network - Go to the Radioactive Show - 3cr.org.au 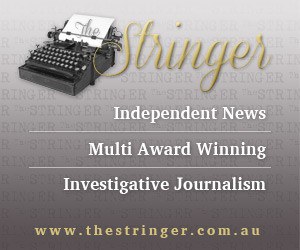