Uranium accounted for 0.19 per cent of Australia's export revenue in 2011/12 (the last available figures). By the most generous estimate, uranium accounts for 0.015% of all jobs in Australia. For Queensland, there is the additional limitation that the state has around just 2% of Australia's uranium resources. Clearly, the industry has no capacity to deliver significant economic or
employment benefits.

Instead of acknowledging the extremely limited economic potential of uranium mining in Queensland the LNP state government, the Australian Uranium Association and the Queensland Resources Council have continued a pattern of extravagant and unsubstantiated claims regarding jobs, revenue and royalties. Enthusiasm is no substitute for evidence and limited sectoral self-interest is
not the same as the public interest. The assumptions and analysis of those promoting the uranium sector in Queensland needs to be challenged and reviewed.

Most companies interested in uranium in Queensland are foreign companies, any profits of which would not remain in Queensland. The mining industry has a history of fly-in fly-out contract employment, which does not necessarily bring many or lasting jobs or significant prosperity to local economies. And once the ore is extracted, the company will leave the community to manage the radioactive tailings, effectively forever. Private profit would leave the region while increased public risk and legacy would remain.
Uranium mining poses a significant threat to Queensland’s unique environment and way of life. It is implausible that the limited economic benefits associated with any future uranium operations in Queensland could outweigh the diverse problems and risks associated with uranium mining detailed in this paper.

The specific radioactive and fissionable characteristics of uranium make uranium mining fundamentally different from other types of mining. Uranium mining is associated with:

 radiological risks to workers and the public;
 direct and continuing contamination threats to ground and surface waters and the
environment surrounding and downstream and downwind from mine sites
 risks to other industries such as agriculture and tourism due to environmental damage and
contamination from tailings and mine wastes,
 the flow-on risks of the nuclear fuel chain and the risks inherent in nuclear power, including
the fact that Australian uranium directly fuelled the continuing Fukushima nuclear crisis.
 the generation – at all stages of the industrial process – of large volumes of long-lived
radioactive wastes, including intractable high-level nuclear waste created in nuclear reactors.
 the spread and legitimization of weapons of mass destruction (WMD).

It is our considered view that the uranium mining sector fails key sustainability, safety and social benefit tests and should not be permitted or advanced.

This week a joint effort by Unions and NGOs will release an alternative to the QLD government's Uranium Implementation Report: "High Risk - Low Return: the case against uranium mining in Queensland".

The report will be released at 12noon Monday March 18th. 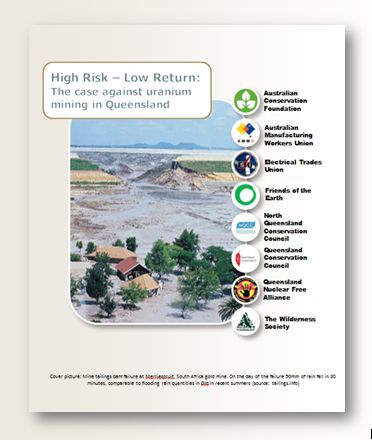