Melbourne heatwave a sizzling autumn end to an 'angry summer'

Monday was the 8th consecutive day of above 30C heat with a forecast of at least two more days of temperatures in the mid 30s. That will make 10 continuous days before a cool change is expected late on Wednesday brings down temperatures to a milder high 20s. The previous record for any month was 8 continuous days set in February 1961. For the month of March, seven consecutive days above 30C is the record set in 1995.

The average temperature in Melbourne during March is 23.9C. The hottest March on record was 1940 with an average of 28.9C which we may well be on track to exceed this year.

Yes - the long term trend just keeps getting hotter. But we have had autumn heat waves before, they just weren't as long.

There was a particularly savage one back in March 1940: "Yesterday was the sixth day of Melbourne's phenomenal autumn heat wave. The record length for a March heat wave is seven days, established in 1934, when the highest temperature was 103Fdeg. The maximum temperature record has been broken, and the record for duration will be equalled to-day." reported the Argus.

"Water consumption is reaching new records. In four days Melbourne has used 616,170,000 gallons, but the storage position is satisfactory." continued the report.

But we do have better refrigerated distribution and storage, including fridges in households now a days. Back in 1940 "Salad vegetables were almost unobtainable in Melbourne and the suburbs yesterday afternoon."

Air-conditioners, refrigerated food storage have all been advances that help us to adapt. But these lengthy hot spells tend to catch the elderly unaware with greater chance of mortality due to increase in heart attacks, heat stress. These heatwaves will be at the lower end of normal by the end of the century, so our grandkids are going to do it much tougher, unfortunately.

This autumn heatwave comes after an "angry summer" of heat, rainfall and flood level records being broken. In January I reported on Extreme Heatwave for Australia January 2013 - bushfires strike. Yes, records tumbled in heatwave as Julia Gillard linked bushfire to climate change.

The Climate Commission report details the many records broken. Professor Will Steffen who wrote the Angry Summer report said in an article on The Conversation website:

"All weather is influenced by climate change. The climate system is warmer and moister than it was 50 years ago, and this influences the nature, impact and intensity of extreme weather events. All of the extreme weather events of the angry summer occurred in a climate system that has vastly more heat compared to 50 years ago. That means that they were all influenced to some extent by a climate that is fundamentally shifting." 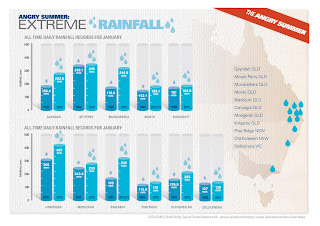 But summer also saw record rainfall and flooding brought to the Queensland coast and Northern Rivers region of NSW from ex-tropical cyclone Oswald. Torrential rain, tornados on Queensland coast causing flash flooding and damage. The media were slow to connect the dots with this extreme rainfall event. I was one of the first to make the connection publicly with Queensland 2013 bigwet floods, tornados and climate change. Records broken for rainfall and flooding include:

For Victoria, the summer was described as one of the driest in decades. Major fires occurred across the state, including grassfires that threatened homes in Melbourne's northern suburbs. So an 'angry summer' morphed into an 'angry autumn' with people wondering when the heat will stop.

And these events all happened when the El Nino Southern Oscillation (ENSO) was in a neutral phase. El Nino events exacerbate high temperatures and drought for Australia. So things may get even worse during the next El Nino phase we experience. Indeed, Blair Trewin and Karl Braganza from the Bureau of Meteorology described some of the implications for us in an article on the Conversation:

"Australia has warmed by nearly a degree Celsius since 1910. This is consistent with warming observed in the global atmosphere and oceans. And it's going to keep getting hotter. Over the next century, the world will likely warm by a further 2 to 5 degrees, depending on the amount of greenhouse gases emitted into the atmosphere."

"Under mid-to-high emissions scenarios, summers like this one will likely become average in 40 years time. By the end of the 21st century, the record summer of 2013 will likely sit at the very cooler end of normal."

They also pointed out that the heat wasn't just restricted to Australia. "Many parts of southern Africa had their hottest January on record, while the month was also much hotter than normal in large parts of Argentina, Chile and Brazil. In parts of Patagonia, January temperatures were more than 4°C above normal." they said.

Indeed, the US has just experienced two extremely hot summers in 2011 and 2012, and the Russian summer of 2010 also setting heatwave records. "The latest global analyses have found that extreme high temperatures are increasing in frequency almost throughout the world, and the Australian results are consistent with that picture." said Blair and Braganza. 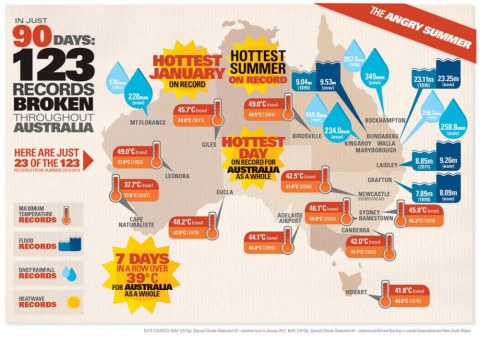 You change the name to suit your story

We get a few hot days and its global warming, record heat since 1961, well tell me what caused it to be hot in 1961? if it is Climate change,Global warming or what ever you changed the name to,Just to suit your story. OH and the cool change came through at 8:00am Wednesday so you will have to change it from 10 continuous days before a cool change to 9 days.