Victoria has a new Premier with Ted Baillieu falling on his own sword, with Denis Napthine, the member for South West Coast, being appointed into the role of Premier of Victoria. Just in time as new economic statistics show that the Victorian economy is in recession. Restoring sanity to planning regulations for wind farm development could boost regional development and the Government's very low environmental credentials as it faces re-election in 2014.

Related: Petition - Let's get Victoria back on track: clean energy, protect our farms

Friends of the Earth have highlighted one small policy change that could make a substantial difference in Victoria's regional economy and employment and also provide substantial climate emissions reduction. We are talking about reversing Baillieu's drastic planning law VC82 for wind turbines whereby anybody within a 2 kiloneter radius of a proposed wind turbine can veto the development.

"There is no doubt that Ted Baillieu was ideologically committed to opposing wind energy" said Friends of the Earth renewables spokesperson Leigh Ewbank. "The new Premier, Denis Napthine, does not have the same ideological baggage."

Friends of the Earth did a study on the real cost of Ted Baillieu's wind energy policy which showed that the implementation of this regulation stopped quite a number of wind farms on the drawing board from going ahead. Investments were instead made in South Australia where the wind industry has been booming and wind generated electricity supplies 26% of the total power to South Australian, reaching up to 80% during some peak occasions and also exporting power to Victoria through the grid connect.

"South Australia has been the main beneficiary of VC82, with massive development of the wind sector in recent years. Job opportunities, investment and income for farmers and local Councils have moved west as a result of Ted Baillieu's ideological opposition to this clean energy source." said Mr Ewbank.

According to the Friends of the Earth study:

The stalled investment in Victorian wind farms has stopped 408 megawatts of clean energy capacity coming online. A boon for the coal fired generators who have been suffering a reduction in power use, while passing on the costs of the carbon price and the making a sizeable profit from the excessive subsidies to compensate for the carbon tax.

Denis Napthine comes from Warnambool with a manufacturer, Keppel Prince, of wind turbine towers located in Portland. The company employs 100 people, but would employ more if the planning restrictions on the development of wind farms were lifted and it provided the wind tower components.

In February Napthine went into bat for Keppel Prince against the import of wind tower components cheaply imported from South Korea, China and Vietnam.

"It's about time the Prime Minister lived up to the promise she made on Sunday in her jobs package and delivered local jobs to Keppel Prince in Portland," the member for South West Coast told State Parliament. "One step the Prime Minister could take immediately to assist Keppel Prince and other Australian manufacturers is to abolish the job-killing carbon tax which is driving up the price of electricity and making local businesses less competitive against imported products." reported the Warnambool Standard.

One small but hugely positive step Premier Napthine could take is changing planning regulatuion VC82 that has stifled wind farm development in this state.

"As Minister for Regional Cities, who represents an electorate that has benefited from the jobs and investment that comes from a thriving renewables energy, Mr Napthine is well placed to overturn the regressive planning law VC82, and re-establish Victoria as a place where the wind industry can expand" said Mr Ewing.

Environment Victoria has also said the change of leadership is a chance for the Government to reverse or soften it's unpopular anti-environment policies.

"The past two years have seen unprecedented attacks on Victoria's environment and a rollback of environmental protections that have been in place for decades in some cases." said Environment Victoria CEO Kelly O'Shanassy

"Premier Baillieu presided over decisions which prevented billions of dollars of investment in wind and solar farms, weakened the Murray-Darling Basin Plan and cut environment spending and programs. At the same time he supported new polluting and damaging industries like brown coal exports and commercialisation of National Parks." said Ms O'Shanassy.

"We're hopeful that a change of leadership will lead to a change in direction on environment policy. In the past Denis Napthine has been a strong supporter of the wind and solar industries, and as the member for the South West Coast he knows first-hand how many jobs the wind industry has created in regional Victoria."

So how about it Denis? Stimulate the regional economy through allowing more wind farms and enhance your Government's climate and environmental credentials a little bit? 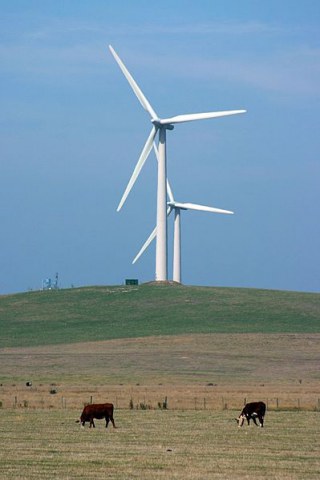