The Australian Government has an official policy of opposing the Japanese whaling operation in the southern ocean whale sanctuary, but officially it is very quiet. Not so much as a peep from the media releases on the Federal Minister for the Environment Tony Burke MP or the Australian Foreign Affairs Minister Senator Bob Carr's websites. This is despite several ship collisions between ships of the Japanese whaling fleet and 3 Sea Shepherd Australia vessels that have already occurred near Antarctica in the Australian Antarctic Territory and in Australia's marine search and rescue zone.

Bob Brown, former Senator and leader of the Greens and now a director of Sea Shepherd Australia claims that the Whaling Fleet committed multiple breaches of international law and has called for Australian Government intervention, both diplomatic and in practice by sending an official Australian Government vessel to the area, such as the customs vessel Oceanic Viking that was despatched in 2008 and in 2010. And still no official response from the Government.

Whaling in Australian territorial waters has been found illegal in a ruling issued by the Australian Federal Court in 2008. Indeed, even companies or individuals that assist Japanese whaling operations may be found to be assisting criminal activity and be in contempt of the Federal Court.

Tony Burke has reiterated that the current policy of the Gillard Government is to proceed with the long running case - Whaling in the Antarctic (Australia v. Japan) - before the International Court of Justice about the international legality of Japan's whaling operation.

But neither the Greens nor the conservative opposition parties are entirely happy with this stance. The politics of whaling in Australia usually entails the Government of the day making concerned statements about safety at sea and general platitudes in opposition to whaling. The present Labor Government had the gumption a few years ago (2008) to send a customs vessel, the Oceanic Viking, to investigate and document the whaling practices of the Japanese fleet. And a couple of years later in the leadup to the 2010 election initiated the International Court of Justice proceedings.

But the fact of the matter is that opposition parties almost always are seen to be advocating greater action to stop whaling. This was true when the conservatives were in power under John Howard and Ian Campbell was the Environment Minister. And it holds true today with Labor in power both when Peter Garret was Environment Minister and the current Minister Tony Burke. But support to stop whaling crosses all party boundaries.

Sea Shepherd even boasts that when Ian Campbell left politics he joined Sea Shepherd as a director, which highlights just how strong support for Sea Shepherd is both in the community and across the left right divide in politics.

Truth is conservation should be at the heart of conservative values, but conservative ideology has become warped by neo-liberal economics, which has denigrated the values of conservation and environment, except where it can be costed and profited from in the short term.

So today in the Senate, Greens Senator Rachel Siewert put forward a motion noting that a Japanese military vessel has now entered the conflict and called on the Government to send a monitoring vessel to observe the whale hunt. The motion received support from opposition parties, as expected, who want to make every bit of political capital from the stance of the Labor Government. Surprise, surprise, the Senate supported the motion.

Here is what Senator Siewert had to say in her media release:

"It must be an absolute priority for the Government to act in response to today's motion in the Senate, which calls for urgent action to be taken as the dangerous and unpredictable action of whalers continues," Senator Rachel Siewert, Australian Greens marine spokesperson said today.

"The Japanese whalers are trying to imply they are the innocent parties in clashes with activists. Like the whole Japanese claim to be undertaking science based whaling, this is another myth."

"The reality, as shown through Sea Shepherd videos with clear lines of sight, is that the whaling ships are working in tandem to put vessels such as the Bob Barker at risk of serious damage. In doing so, they are jeopardising the lives of both crews, as well as increasing the likelihood of a fuel spill in this sensitive marine environment."

"Their extreme actions included the use of flash grenades and water cannons aimed at the ship's helm - making navigation practically impossible."

"The use of these grenades is made all the more alarming by the fact that one detonated in the proximity of the Sun Laurel, which is known to be carrying fuel for the fleet."

"The Government must act to offset the increasing danger in our waters. What more incentive do they need, given the ongoing conflicts and the recent escalation involving the arrival of a vessel from the Japanese Maritime Self-Defence Force."

"I implore the Prime Minister to take notice of the Senate's decision and act immediately," Senator Siewert concluded.

Senator Siewert: To move--That the Senate--

The Motion was agreed to this afternoon.

The ball is back in the court of the Government.

Sea Shepherd have larger ships that have effectively and non-violently blockaded the Nisshin Maru from refeuling in multiple attempts on two days. It is the Japanese that are undertaking highly dangerous ramming activities against the Sea Shepherd ships, aiming high powereed water cannon directly at the bridge and ventillation shafts to flood the Sea Shepard engine compartments, now deploying tow cables to attempt to prop foul the activist ships, and throwing explosive grenades, at least one of which has exploded on the deck of the Sun Laurel fuel tanker.

Hello! Lighted Match! Fuel tanker! Sounds like a very risky and dangerous activity to me to be launching explosives around a fuel tanker, even if they are only called 'flash-bangs'. They can still ignite a conflagration.

On the ABC 7.30 Report current affairs program Sea Shepherd director Bob Brown was interviewed by presenter Leigh Sales. Towards the end of the interview Ms Sales raised that "there'd be some Australians who would say that Sea Shepherd's a vigilante operation out of Australia."

Bob Brown's articulate response was to put this back to a problem of inaction by the rest of the world.

"Sea Shepherd is a nonviolent operation, unlike the Japanese. It's unarmed, unlike the Japanese. It's upholding the law, unlike the Japanese. And no wonder it's got the support of the Australian people. And it's had hundreds of thousands of dollars damage done to its vessels in the last few days. It's had - yes, they almost rolled the Bob Barker with 35 good, courageous citizens aboard the other day. There could have been a lot of deaths if that had happened. This is the Wild West without a police force and it's high time Australia, New Zealand, other countries who believe in international law were down there to make sure that the law is upheld. Meantime, Sea Shepherd's doing that job for this planet, for the whales and for the majority of people around the world who want to see those whales protected."

So who are the real terrorists in the Southern Ocean? Hint: it's the people there to perform a slaughter and trying to hide it as 'scientific research'. Who have no hesitation in ramming boats, just remember the incident with the ramming and sinking of the Ady Gil by the Shonan Maru 2.

The Sea Shepherd ships continue to suffer a beating in the Southern Ocean in non-violently blockading refuelling the whaling ships and upholding the Australian Federal Court Injunction, the International Whaing Commission declaration of whale sanctuaries, and marine and Antarctic international law. While Governments who oppose whaling sit back and do nothing pro-active. 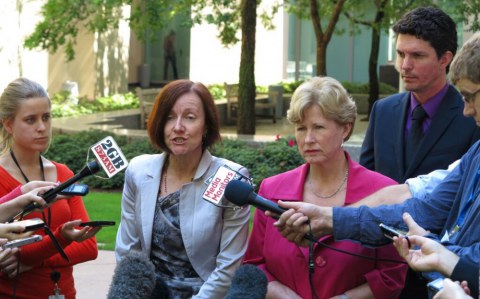