Maules Creek and Boggabri coal mines, and the Gloucester CSG Field in New South Wales get conditional go ahead from the Federal Environment Minister Tony Burke increasing Australia's contribution to greenhouse gas emissions and climate change. Decision strongly condemned by the local community and conservationists, with court challenge being flagged as possible.

Environment Minister Tony Burke has conditionally approved the Whitehaven Maules Creek open cut coal mine near Narrabri in the Leard State Forest as well as the four fold expansion of the neighboring Idemitsu Boggabri coal mine, and a major Coal Seam Gas field near Gloucester being undertaken by AGL Energy.

The decisions were brought forward after the NSW State Government leaked that the Minister had already decided last year to approve the projects. "Unfortunately the decision of the New South Wales Government to leak commercially sensitive information has caused me to have to bring these decisions forward today with the remaining work to be resolved directly between the company and myself." Tony Burke said in a press release.

The decision came just a few days after an announcement that the Minister would delay a decision on the Maules Creek mine until the end of April.

According to a report in the Age newspaper the three projects have a huge carbon footprint of 47 million tonnes of greenhouse gases a year. This amounts to 8 per cent of Australia's emissions and contradicts the work of the Climate Change Department and carbon price in aiming to reduce Australia's emissions by just 5 per cent by 2020.

A Greenpeace report by environmental consultants Ecosys - Point of No Return - published in January 2013 highlighted the danger of 14 global 'carbon bomb' projects which would increase global carbon emissions by 20% and lock the planet in to worst case business as usual climate change scenarios of 4 to 6 degrees centigrade of global warming this century. Fossil fuel extraction projects in Australia and China top the list. The approval of the Maules Creek coal mine and Boggabri coal mine extension are part of Australia's substantial contribution to this 'carbon bomb'.

On the same day BHP's Dendrobium longwall coal mine project was also approved by the NSW Government for mining under part of Sydney's water catchments, posing a threat to Sydney's water supply, according to conservationists, and breaking a pre-election promise by conservative Premier Barrie O'Farrell.

Conditional approval given but Minister fails to investigate false information

The Minister said that the Maules Creek and Boggabri mine proposals had been conditionally approved subject to strict conditions. "In considering these proposals I have taken into account their likely impacts on the critically endangered ecological community including the white box, yellow box, blakely's red gum, grassy woodland and native grassland and listed endangered and migratory species, in particular, the swift parrot, regent honey-eater and greater long-eared bat," Mr Burke said.

Conditions include requiring wildlife corridors, limits on the clearance of native vegetation and a $2.5 million investment in rehabilitation research for threatened species.

Regarding Whitehaven Offsets Report, an investigation and survey of the Northern offsets for the Whitehaven Maules Creek project found that:

Approving the proposal when the environmental offsets are of degraded land that doesn't contain the requisite ecological basis for preserving ecological diversity of the area amounts to an abrogation of Tony Burke's responsibilities under the Environment Protection and Biodiversity Conservation (EPBC) Act according to conservationists.

Jonathan Moylan, the activist and spokeperson for Front Line Action on Coal said that Tony Burke has failed to meet his obligations under the Environment Protection and Biodiversity Conservation Act by approving the Boggabri expansion and Whitehaven's adjacent Maules Creek Mine.

"Tony Burke should hand in his resignation letter today," Mr. Moylan said. "These mine expansions would destroy thousands of hectares of old-growth forest including critically endangered habitat for koalas, swift parrots, and regent honey-eaters, as well as destroying farmlands and depleting the water table."

Jonathon Moylan was the activist who published the Whitehaven Hoax letter in early January causing Whitehaven share price to plunge for a couple of hours and highlighting the unethical role of the ANZ Bank in approving a $1.2 billion investment in Whitehaven in December 2012, despite it's participation in the Equator principles for sustainable investment.

Economists at Large have also independently assessed the economic basis of the mine proposals and have raised serious questions about the economic assessment of the Maules Creek Coal project. "The Economic Assessment contains flaws and omissions that make it unsuitable for decision making purposes. The Assessment should be revised...." says the Economists at large report from the4 executive summary.

"It's hypocritical of the government to encourage ASIC to pursue activist Jonathon Moylan while turning a blind eye to experts' allegations that Whitehaven Coal breached our national environment laws by providing false or misleading information about the type of vegetation offsets," said Senator Larissa Waters, Australian Greens Environment spokesperson.

"Instead of instructing his Department to investigate this alleged breach of environmental laws, Minister Burke has instead conditionally approved the proposal.

"The conditional approval is farcical in the detail it requires to be provided after the Minister's official tick-off. The approval should not have been issued with such uncertainties unresolved." she said in a media release.

Greens Leader Christine Milne also accused both Labor and the Coalition of supporting coal and fossil fuels to the detriment of biodiversity and the environment and the long term climate with global warming. "Mr Burke and the Gillard Government have sold out again and given the green light to miners from one end of the country to the other, from the Great Barrier Reef to James Price Point, the Tarkine and now the Leard forest." she said, "A vote for Labor or the Coalition is a vote for Gina Rinehart, Clive Palmer, the mining lobby and accelerated global warming."

The local Maules Creek Community have pledged to challenge the Ministerial decision in Court and have established a Leard Forest Fighting Fund.

"The Minister has yet again simply folded to the demands of big coal and gas corporations. It is a very sad day today for the people of Maules Creek and Gloucester - their lives will change forever as a result of what the Minister has done today." said Carmel Flint, spokesperson for Lock The Gate Alliance.

"Many will no longer be able to live on their farms and properties and those who stay are likely to experience serious health impacts, their property values will plummet and their small communities will be split apart. The places they love will be torn apart." she said, "These decisions reflect both a complete failure of the Federal legal system and a profound failure of political courage."

"Rarely, if ever, have such environmentally damaging developments been approved - the coal mines will destroy a critically endangered ecosystem and an important koala population; the gasfield will threaten underground water resources." concluded Ms Flint.

Whitehaven shares continued their rollercoaster ride jumping 7.8 per cent after the Minister's announcement. The shares had previously slumped when the Minister had announced the decision would be delayed till end of April.

Condemnation of the decision from activists and conservationists came quickly. An activist established a tree-sit suspended high up in the air attached to two excavators and two bulldozers to prevent ongoing destruction of the Leard State Forest by Idemitsu's Boggabri Coal mine yesterday.

AGL gets approval to develop Coal Seam Gas near Gloucester

The approval of AGL's proposed coal seam gas field near Gloucester has been strongly criticised by Federal Independent Member Rob Oakeshott who represents the area in Federal Parliament.

"If the science was in, if we knew for certain CSG drilling represented no threat to our drinking water or to the environment, then so be it. But the research hasn't been done; our bioregional study has not been done and the jury is most definitely out on what the potential impacts of CSG extraction could be," Mr Oakeshott said. "Today's decision was about leaked letters between the federal and state Ministers; not about what is best for Gloucester and the Manning Valley."

"I'm gutted by the decision, and I know many good people in community-based groups who have worked with me on this issue for more than two years will also be gutted." he said in a media release.

"If we can't resolve this through legislation, I fear what could happen on the ground in communities such as Gloucester when drilling rigs roll out across the landscape," Mr Oakeshott said. "This is a community that has a very strong connection to the Gloucester landscape. It also relies on clean soil to export quality food and relies on clean water to drink. "These are fundamental issues to any rural community and worth defending."

Fellow Independent MP Tony Windsor has also indicated that the Federal Government needs to legislate to include water quality as a ''trigger'' for its environmental laws, specifically the Environment Protection and Biodiversity Conservation Act, before the election on September 14.

Already we are seeing strong civil disobedience blockades against coal seam gas exploration in the Northern Rivers region at Glenugie and Doubtful Creek. Strong community protests and support for the Lock the Gate Alliance are likely to spread further south with this new announcement. 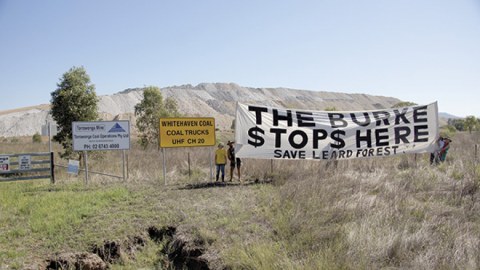