For a moment farmers, conservationists and climate campaigners in the north west of New South Wales thought one of the big four banks - the ANZ Bank - was living up to it's sustainability charter and taking a lead: acting ethically with regard to not destroying agricultural land, maintaining biodiversity and preventing climate change.

A media release purportedly from the bank said it was withdrawing it's $1.2 billion loan for Whitehaven for development of a new coal mine at Maules Creek on agricultural and forrested land near Narrabri, New South Wales. Further, the letter said that "ANZ is currently undertaking a review of coal and gas investments on productive agricultural lands and areas of high biodiversity."

But it was not to be.

Anti coal activist Jonathon Moylan had sent out an elaborate hoax media release purportedly from the ANZ Bank using bank letterhead. Shares in Whitehaven plummetted on the Australian Stock Exchange, with the company stock losing almost 9 per cent from $3.52 to $3.21 shortly after midday in a fall that wiped about $314 million off the value of the company. The company was put into a trading halt, but trade later resumed in the afternoon with the share price closing at $3.50, just 2 cents down on the day.

Activists claim that ANZ Bank should not fund the project as "the mines do not comply with the Equator Principles for Financial Institutions in relation to cumulative assessment, biodiversity conservation, health, occupational safety, cultural heritage, land conservation and the promotion of renewable energy."

Carbon producing activities such as coal mining are becoming increasingly under scrutiny with increasing strident warnings on the impact of climate change and that we need to limit carbon dioxide pollution to preserve a safe climate. Indeed, a recent report by the global accounting firm PriceWaterhouseCoopers warned that high carbon assets may become stranded.

Questioned by reporters from the Age Mr Moylan said the hoax was justified by the environmental destruction that would be wrought by the mine. The mine will destroy the Leard Forest and subsume farm land.

"We considered the decision to run a spoof very carefully before we did it, but we believe it is justified," Mr Moylan said. "We think it is a bit like the Chaser getting into APEC, or the Yes Men announcing that Union Carbide had shut down."

When the reporter asked if he had qualms about lying to the public to achieve environmental ends, he said: "Our primary concern is the impact of this mine on the environment at the end of the day. A lot of people were taken in by it, but when you compare the cost of that to the health of our forests and farmlands, it justifies it."

The Australian Securities and Investments Commission (ASIC) have said the matter would be investigated and focus on whether there had been a breach of the Corporations Act (Section 1041E - false or misleading statements).

The planned open-cut coal mine at Maule's Creek would clear up to 2000 hectares of the Leard State Forest, which provides habitat for koalas and other vulnerable species. It is Box-Gum Woodland with a high biodiversity value in the northern inlands, and a critical link for the biodiversity of the entire western inlands. Anti-coal mining Activists have established a camp for Protecting Leard State Forest and celebrated 150 days on January 1st 2013. The mine is opposed by the Maules Creek Community as well as a number of environmental organisations, including the Lock the Gate Alliance, the Northern Inlands Council for the Environment, the National Parks Association and the Nature Conservation Council of NSW.

Activists claim Whitehaven Coal would destroy around 1,360ha of native vegetation (half of which is listed as endangered) as well as huge tracts of productive farmland if the mine was able to proceed following Federal Environment Minister Tony Burke’s decision.

"Why can a coal company that is so unsound in terms of finance and governance be allowed to do such damage, given that it might not be around to clean up the mess?" said Front Line Action on Coal spokesperson Murray Dreschler in a blog post in October 2012.

"The Planning and Assessment Commission has buckled to pressure from Brad Hazzard’s department to water down rehabilitation conditions. Is this because Mark Vaile is the former leader of the National Party, or because deputy chairman John Conde presides the tribunal that decides federal politicians’ and judges’ salaries, or because the company’s lobbyist, Liam Bathgate, used to be Barry O’Farrell’s chief of staff?"

"If the government can’t say no to its mates in the coal industry, then it’s up to the community to stand up for our future," Mr. Dreschler said.

The Leard Forest is an 8000 Ha biodiversity hotspot recently identified as a Tier 1 Biodiversity Area by the NSW Government in the draft New England-North West Strategic Regional Land Use Plan (SRLUP). The SRLUP states that Tier 1 areas ‘cannot sustain any further loss’ and are ‘critical to biodiversity persistence’.

"Approximately 46 threatened animals, 13 threatened plant and 6 threatened native fish species and the endangered ecological community (Lowland Darling River), listed under
NSW legislation, are known to occur in mining areas and as such are likely to be impacted. There are also seven communities which are “Matters of National Environmental Significance” under the EPBC Act which are likely to be impacted by mining operations." pp59 draft New England-North West Strategic Regional Land Use Plan (SRLUP)

In September two activists scaled the coal-crushing plant at the Boggabri Coal Mine and suspended from 20m above the ground a banner saying 'Stop the Coal Rush: Protect Health, Water, Climate'.

The text of the hoax media release is below.

ANZ today announced it has withdrawn its $1.2 billion loan facility to Whitehaven Coal, which was primarily intended to develop the Maules Creek Coal Project.

The decision is related to volatility in the global coal market, expected cost blow-outs and ANZ's Corporate Responsibility policy.

ANZ Group Head of Corporate Sustainability, Toby Kent, said: “We want our customers to be assured that we will not be investing in coal projects that cause significant dislocation of farmers, unacceptable damage to the environment, or social conflict. The decision to withdraw our loan facility has been made after a careful analysis of reputational risks and analysis of the returns on this mine in the current climate of high volatility in the coal export market.”

Whitehaven Coal has been consulted in relation to the decision and the withdrawal of the loan facility became effective yesterday afternoon. The loan facility, which was drawn up on December 21, generated significant customer feedback and will no longer be enforceable. ANZ is currently undertaking a review of coal and gas investments on productive agricultural lands and areas of high biodiversity.

Takver is a citizen journalist from Melbourne Australia who has been writing on climate change, science and climate protests since 2004. This article was also published on his blog. 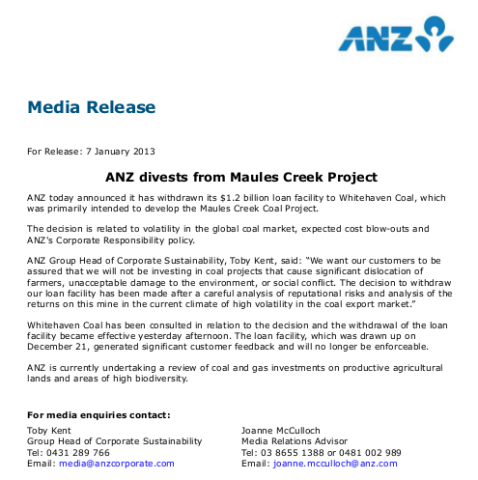 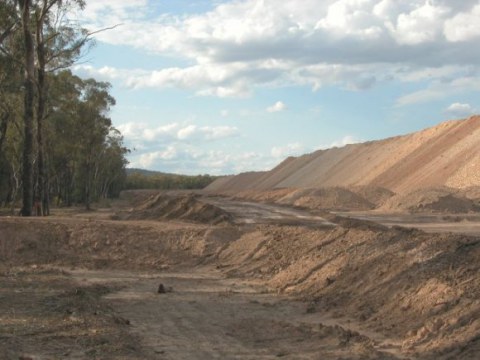 Real hoax is by Gillespie Economics and NSW Planning Department

Let me introduce the people of Maules Creek, NSW. It's a small village - population about 100 - near Narrabri, made up of farming families who have been in the area for generations. For years they worked hard to keep good relations with the coal mining companies in the area. But they felt betrayed by them when a 2000-page environmental impact statement was delivered just days before Christmas, with only weeks to respond.

One of the farmers, Phil Laird of the Maules Creek Community Council, approached us, a public interest economics group, Economists at Large, to review the economic appendix of the 2000 page assessment. He told me his wife works at the polling station on voting days. ''There are about 100 people here and 99 of us vote National. We think that one non-National is the school teacher,'' he half-joked.

They are not natural protesters and they feel let down by the Nationals. Nor are they natural allies with environmental protesters such as ''Jono'' Moylan. But they need him to help their cause.

Rod Campbell is an economist and director of Economists at Large.

ANZ the most dishonest destructive entity known on earth

anz if a fake, they have enforcement actions asic, stole millions from mums and dads re opres prime, have two class actions, are serial offenders in fos ombudsman, they bullied rob revees high fyler out of australia and deserve to be shut down as they are the most dishonest destructive entity known on earth. Oh sorry dont forget, kids working in mines png, and logging,csg in aust. wow how they are not in jail is beyond me.