Bushfires strike with extreme heatwave blanketing most of Australia

Jan 5: Tasmanian Bushfires catastrophic but no confirmed loss of life

Jan 3: Elevated temperatures in an extreme heatwave are occuring across a brought sweep of Australia, with the heatwave expected to last at least a week. It is very unusual that a heat wave covers such a large area of the continent at one time, according to Karl Braganza, manager of climate monitoring at the Australian Bureau of Meteorology. Australia's weather has switched to hot and dry after one of the wettest two year periods in Australia's history influenced by an extremely strong La Nina event.

Over the southern winter and spring weak El Nino conditions have caused below average rainfall across much of Australia with a heatwave and above average temperatures in early Spring. An extreme summer heatwave is forecast to happen from January 3 over a wide area of Australia, particularly central inland areas, lasting for at least a week.

"We have a major heat event under way," Karl Braganza, manager of climate monitoring at the Bureau of Meteorology, said. "There are not many instances in the historical record where you get a heat event covering such a large area of the continent."

Brett Dutschke, senior meteorologist at Weatherzone, said it was unusual to have so prolonged a hot spell. "It's a once-in-20 or 30-year heatwave event in desert areas," he said. "More populated areas further south … are going to experience some of this as well."

Jan 4: In a statement released on the Australian Science Media Centre, Alasdair Hainsworth, Assistant Director Weather Service at the Bureau of Meteorology, said:

"Extreme heat events, such as this one, have wide ranging impacts across agricultural and horticultural sectors, infrastructure and transport, and not least human health and safety. Locations including Alice Springs, Adelaide, Renmark, Melbourne, Mildura, Echuca, Albury, Broken Hill and Wagga Wagga all have temperatures of 40 degrees or higher forecast for today.

"Another concern is the amount of vegetation following two wet years, which has led to high fuel loads, that continue to dry out and raise concerns about increased bushfire risk. Fast moving grassfires are of particular concern.

"Increasing fire danger is anticipated in southeast Australia with hot and gusty northerly winds, followed by a southwesterly change late on Friday.

"There will be some temporary relief from the heat on Saturday with this weak change, moving eastwards over the weekend.

“The next change is then expected to move through southern inland and coastal regions around Tuesday or Wednesday next week, but in other areas temperatures are expected to remain high, with a continuation of heatwave conditions well into next week.”

After the big wet, nine months of drying out

John Nairn, South Australia’s Acting Regional Director for the Bureau of Meteorology, also called attention to the much drier nine month period reducing soil moisture as contributing to the impact of the heatwave:

“The current heatwave is unusual due to its areal extent. More than 70% of the continent is currently experiencing heatwave conditions. Apart from the required slow moving synoptic weather pattern required for any heatwave, the spatial extent of this event can be attributed to the extent of dry soils across the Australian landscape.

"Low antecedent rainfalls across much of the continent (see figure below) along with the late arrival of the Australian monsoon have resulted in drier soils. Without the ability to remove latent heat through evaporation from moist soils, surface temperatures rise above normal, with the daily heating cycle building a deeper body of stagnating hot air over the interior.

"Breaking the heatwave cycle will require a combination of the onset of the rain bearing monsoon trough and the penetration of cooler Southern Ocean air masses. Severe heatwave conditions across the interior of Australia are set to continue for a while yet.” 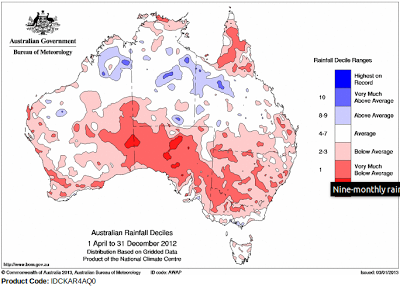 Bushfire in a warming world

I described in an October 2011 article - Flooding rains now burning plains - Bushfire risk and climate change - the fire weather trend for the future in a warming climate. It's worthwhile restating:

Christopher Lucas, in a 2009 paper on Climate Change Impacts on Fire weather (PDF) explains the trend:
"Fire weather is clearly changing across Australia, with a tendency towards more dangerous conditions being observed across the country. Significant trends in median and 90th percentile FFDI are observed in all seasons, but overall, it is the summer months – the peak of the southern fire season-- that shows the least amount of change. The largest changes are occurring in the spring and autumn, broadly consistent with the model projections. The fire season is lengthening, with an earlier start and a later end. The number of ‘extreme’ fire weather days is increasing in spring, summer and autumn. In a regional sense, the Murray-Darling Basin region is seeing the biggest change in fire weather danger, with significant positive trends observed in all four seasons. In general, the eastern portion of Australia is seeing larger trends in more seasons, but almost every region shows some degree of change."

Lucas concludes by saying the possibility of interdecadal variability cannot be ruled out and that "a direct attribution to anthropogenic climate change cannot be made at this time."

“People most at risk are those with a chronic disease, such as heart disease, as well older people, children, people taking certain types of medicines, and people engaged in strenuous outdoor activity or physical labour. People who are in the high risk groups should take care during a heatwave and consult their GP about the best ways to manage their condition.

“Sweating leads to dehydration, which reduces the volume of blood. This makes the heart pump harder in order to circulate the reduced amount of blood around the body. For people with heart disease and those who are at high risk of a heart attack, these changes can overwhelm the heart and result in a heart attack.

"In Australia, heatwaves claim more lives than any other natural hazard.”

The heatwave that caused Victoria's Black Saturday bushfires in 2009 and killed 173 people directly, also proved fatal to those at risk of heat fatigue: children and the elderly. A report - January 2009 Heatwave in Victoria: an Assessment of Health Impacts (PDF) - found that:

There were 374 excess deaths over what would be expected: a 62% increase in total all-cause mortality. The total number of deaths was 980, compared to a mean of 606 for the previous 5 years. The greatest number of deaths occurred in those 75 years or older, representing a 64% increase;

“It sounds obvious but is nevertheless worth repeating: animals of all kinds need shade, wherever possible, to protect them from searing sun and wind. Also, they need good supplies of cool water; animals can drink up to double their normal intake during hot weather. ....During hot weather, livestock should be checked daily to ensure they’re coping with the heat. Like humans, heat stress can be fatal for animals.

“Poultry too are very susceptible to heat and if they’re kept in a shed that isn’t fitted with an effective cooling system, then the shed should be cooled by wetting the shed or hanging wet hessian in breezeways. Birds will need access to plenty of cool water. For pets, owners can use ice packs or wet towels to cool them down. Ensure pets have access to shade and water. Owners may consider bringing inside smaller pets, such as rabbits, during extreme conditions.”

Severe and Extreme fire conditions are forecast for Victoria

Severe and Extreme fire conditions are forecast for Victoria on Friday 4 January with a total fire ban declared across the state with emergency services placed on alert. Just on New Year's Day when temperatures were warm but not exceptional, there were 60 grass and bush fires across Victoria.

Victorians still remember the Catastrophic bushfire conditions for Black Saturday on February 7 2009, when 173 people died due to the fires.

Report of a large uncontrolled fire between Portland and Nelson on the Princes Highway, 400km from Melbourne. Also a report on problems accessing the CFA website for fire alert information - capacity problems, evidently. Geez, you would think they would have resolved these issues long before today, especially after 2009 Black Saturday fires!

CFA have reported some 49 small fires were dealt with and controlled across Victoria on Friday. There is a small but fast moving fire approaching the town of Ensay in Gippsland.

The heatwave extends to Tasmania with a total fire ban declared for the state on Friday. With winds and high temperatures the fire weather is extreme. Currently there is a fire in the Epping Forest that fire fighters are battling to contain. For information on active bush fires visit the Tasmania Fire Service.

Andrew McGuinness, Tasmania Fire Service acting district officer for state operations told The Mercury newspaper that any fires alight on Friday in south-eastern Tasmania and the upper Derwent Valley would be uncontrollable until conditions abated, probably on Saturday. He said that fuel loads were uncomfortably high in many areas after two relatively quiet fire seasons.

"The grasses are starting to cure [dry off], creating a wick for fires burning through bushland to link up," he said.

According to Mr McGuinness Tasmania usually endures three days of total fire ban. Friday is the third day this season, with the summer season really only starting.

ABC Weatherman Graham Creed reports that the temperature at Hobart has reached 40.9 degrees, hottest day on record for Hobart for any month and also an overnight minimum temperature record set:

Weatherzone reports that "Hobart has recorded its hottest temperature in 132 years of records, reaching 41.3 degrees today".

Reports that winds gusting 50 to 100km/h in the Hobart area. Fire is the major concern. Major Fires have been reported at Inala Road, FORCETT and Dawson Road, LAKE REPULSE. ABC news is reporting the Forcett fire places homes at risk and the fire has jumped the Arthur Highway. The Dawson Road bushfire is burning out of control in the Upper Derwent Valley and is moving towards the community of Ellendale.

At Dunalley, a small fishing village on the Tasman Peninsula, the temperature went from 38.5 degrees at 4.00pm to 54.9 degress at 4.22pm with wind gusts increasing from 63 to 82 km/hr. Four minutes later the temperature dropped back to 44.5C, and wind gusts dropped shortly after. ABC Weatherman Graham Creed comments:

@australia2 If this is accurate it is a great insight into what happens just ahead of a fire front temp rose 38.5 to 54.9 and 80km/h gusts

Latest news is that residents of Dunalley were told to hop onto boats and evacuate to sea.

MT @will_ock:This in from Dunalley #tasmania twitter.com/AmyWilliams_94… People were told to hop on the boats and evacuate to sea. Not good.

While @936hobart, the ABC radio station, tweeted that "A fleet of boats is heading to Tasman Peninsula to rescue 1000s of ppl stranded by #bushfire", at Park Beach, children play in the shallow water as the smoke plume from the fire rises ominously high above:

For the Forcett blaze, there are unconfirmed reports of 65 houses and businesses damaged in Dunally and another 15 in Boomer Bay. One unconfirmed casualty which police are investigating. The Arthur Highway is closed with the Tasman Peninsula cutoff by the fire. Mains electricity has also been cut to the peninsula.

There is also an Emergency Warning issued for a fire near the Tasman highway near Bicheno on the east coast.

Lake Repulse fire front is threatening the communities of Ellendale and Karanja. Lawrenny and Hamilton may be affected early on Saturday morning. Residents have been alerted to enact their bushfire plans tonight.

Meanwhile looking from HBA city toward #Dunalley, night reveals the extent of the blaze on that peninsula #tasfire twitter.com/DiscoverTas/st… 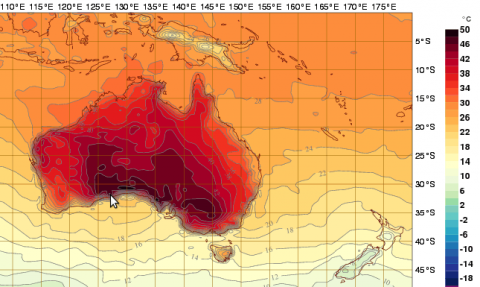 We sit and pray together that they might change the weather