Is non-sniffable fuel really the answer?

Gerry Georgatos
The Western Australian remote Aboriginal community of Jigalong is renewing calls for non-sniffable fuel to combat substance abuse and anti-social behaviour, however some ask is this really the answer. Jigalong is near the heart of the mining boom and yet the majority of its Aboriginal peoples languish - they say 'what mining boom?'

The renewed calls for the switch to non-sniffable fuel come after claims of a rise of solvent abuse. Jigalong's Police Seargent Neil Gordon said a rise of itinerant visitors to the township gave rise to a sharp spike in solvent abuse - petrol sniffing.

Sgt Gordon said that Jigalong had switched to low aroma fuel however though there had been some progress it was not enough and the need for the whole town to switch to non-sniffable Opal fuel was needed.

BP representatives visited Jigalong to inquire into the town's willingness as to whether they would be prepared to switch to non-sniffable Opal fuel.

"I know Cotton Creeks has agreed to go over to Opal fuel, we're very hopeful that Jigalong will do it as well, it's just a case of talking to the local people," said Sgt Gordon.

Jigalong's Chief Executive Officer Cedric Wyatt said that Jigalong's proximity to Newman would make the switch to Opal ineffective. Therefore he suggested that Newman should also switch to Opal and this would go a long way to eliminating solvent abuse from the East Pilbara.

The Human Rights Alliance Indigenous spokeswoman Natalie Flower said if the best a Government could do to try and reduce solvent abuse was to switch to low aromatic fuels then they had not done their job.

"It's certainly good to remove access to a substance that people will abuse however the problem is still there, the problem that someone who is prepared to petrol sniff, well they will be prepared to find some other abuse to oneself to stampede their mind into aberration, find relief from their poverty, hopelessness, and lonesomeness. The problem is that while a mining boom is going on and benefiting those flying in and the big companies and returning royalties to Governments, is that nothing significant is being done for the Indigenous communities - the majority remain unemployed, many homeless, without prospects, utterly impoverished, and without significant recreation," said Ms Flower.

"If they don't petrol sniff, they'll find other abuses and self harm, and well we know that many of them may just finish up as part of the horrific Indigenous suicide statistics this State has come to matter-of-fact accept."

"Let us do more than just remove a perceived problem that does not actually end the core problem, and let us us build communities and flourish them and end the problems all in one go."

The Australian Senate passed the Greens' Low Aromatic Fuel Bill in November 2012, which will make mandatory what has been a voluntary Opal Fuel roll out in parts of the Northern Territory, Western Australia, South Australia and Queensland.

Australian Greens Senator Rachel Siewert said the Bill was a crucial development in reducing the harm caused by petrol sniffing.

“The voluntary roll-out of non-sniffable fuel has been an important strategy, but is one that has had a big hole in it,” said Senator Siewert. “This Bill helps resolve that issue and ensures the roll-out can be completed."

“This Bill is a mechanism for the Minister to be able to help those communities that have worked so hard, for so long, to eradicate petrol sniffing and to envision a better future for their children.”

Low aromatic fuel - Opal fuel - is said to discourage petrol sniffing as it doesn’t have the aromatic fumes that give users a ‘high’. Under the new Bill, the supply of regular unleaded petrol will be replaced by non-sniffable Opal fuel in identified problem areas.

There had been widely reported outbreaks of petrol sniffing in Central Australia. There are 123 petrol stations selling Opal fuel in remote parts of Australia. 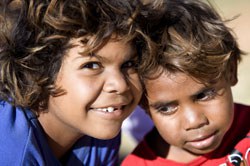