While Federal Resources and Energy minister Martin Ferguson was launching a white paper on energy, the press conference was interrupted by that scallywag Victorian Coal CEO Twiggy Palmcock who thanked the Minister for his support of the fossil fuel industry.

Accompanied by Michael Higgins-Beaumont, Young Lib and Founder of Australia's Young Coal Champions, the pair strode onto the stage during the Minister's speech at the Hilton Hotel in Melbourne thanking him for his unwavering support and commitment to the fossil fuel industry. Minister Ferguson was making a speech to the Committee for Economic Development of Australia (CEDA).

The remarks about drinking coal and gas along with water probably refer to subversive unwarranted allegations and puerile fears of contamination of underground water and aquifers by a cocktail of carcinogenic chemicals used in hydro fracking to access coal seam gas. Or maybe people are worried because they saw some bubbles in the Condamine River.

Michael Higgins-Beaumont, Twiggy's apprentice sang a song for the media throng, the minister and his minders - "Thank you Fergo"

Well, at least you can say Twiggy Palmcock has been bipartisan in thanking the strong supporters of the coal and fossil fuel industry on both sides of politics. This week we saw Energy Minister Martin Ferguson trying to distance himself from the effusive praise of true Aussie scallywag Twiggy Palmcock and last week we witnessed Tony Abbott rebuffing the praise of Mr Palmcock. What is going on! We all know the fossil fuel industry is in bed with politicians on all sides of parliament. Well, maybe not the Greens...

But the ALP legislation on the Minerals Resource Rentals Tax, much weakened after extensive consultation with the fossil fuel industry, and Queensland Premier Campbell Newman recent jacking up mining royalties, it is true, have added a little distance between ordinary billionaire miners and politicians.

According to the Quit Coal blog which has been following the scallywag antics of Twiggy Palmcock reports that the Energy paper talks up CSG as a transition fuel:

The Energy White paper suggests that the government wants to ensure a “healthy” future for fossil fuels in Australia. The paper promotes gas, including CSG, as a “transition” fuel and envisages a slow demise for coal, defying the urgent need to address climate change. Good news for the fossil fuel industry, bad news for anyone who wants to see real action on climate on climate change.

Some academics have warned of the Carbon lock-in: social-technological inertias increasing our addiction to coal-fired energy and the CSG is very much a part of this with some 17 major Liquified Natural Gas (LNG) projects currently in development around Australia. Some academics even have the temerity to suggest reasons why Australia must stop exporting coal. How dare they suggest stopping such patriotic Australians as Gina Rhineheart and Clive Palmer from getting even richer from digging some great big holes to export coal and all that CO2 to developing countries.

The Greens also criticised Martin Ferguson and his support of fossil fuels, especially CSG as a transitional fuel, in a media release:

"Martin Ferguson has been dragged out of his comfort zone here, but his dirty fingerprints are all over the White Paper," Australian Greens Leader, Senator Christine Milne, said.

"Primarily, the White Paper confirms that renewable energy can power all of Australia within decades, a reality being modelled by AEMO thanks to the Greens' carbon price negotiations - but has been shunted aside here with a dash for gas and a vision of fossil-fuels still polluting our atmosphere out to 2050 and beyond.

"The failure of the paper to recognise that China in particular is moving away from coal is a major failing. Just last week Professor Ross Garnaut said the 'awful reality' is there has been wasteful over-investment in thermal coal mining and export capacity. As China moves towards renewable energy, Australia's investment in coal export infrastructure will lead to stranded 'white elephant' assets - a multi-billion dollar mistake.

"In the dash for gas, the paper calls for environmental regulations to be 'streamlined' - risking grave and irreversible damage to our fertile land and fresh water supplies."

"Gas, which is projected to double in price over the next decade, is a threat to affordable electricity in Australia."

Greens leader Christine Milne even had the temerity to say there was a conflict between climate change (what climate change! Oh, systemic climate change that exacerbated Hurricane Sandy) and a fossil fuel export industry.

"The Government cannot say it is committed to reducing greenhouse gas emissions and yet welcome a fossil fuel export industry. Pollution does not stop at borders and global warming is a global problem. If we are to stop climate change and secure a healthy future for our children we need move away from fossil fuels and get serious about becoming a clean energy power house." concluding Greens leader Christine Milne.

Honestly, Greens. Can't you see that Martin is just trying to help his fossil fuel friends make a quick buck before everything goes pear-shaped?

Why just this week even that bastion of accounting capitalism, PriceWaterhouseCoopers warned about Business as usual Carbon emissions heading towards 6C of global warming this century and the shale gas dilemma and the heightened business risks of stranded fossil fuel assets.

You can read the 2012 Energy white paper yourself, if you wish, or read Giles Parkinson's assessment of the White Paper at RenewEconomy: Ferguson spies a green energy future … and steps on the gas. Parkinson said the white paper is heaps better than the draft released last December, but is still stuck in the past.

"To be able to plan and prepare for the future, you need first to be able to imagine it. And despite the policies and rhetoric around the government’s Clean Energy Future package, it struggles to imagine what a clean energy future might look like. Unless it’s got a lot of gas." said Giles Parkinson. 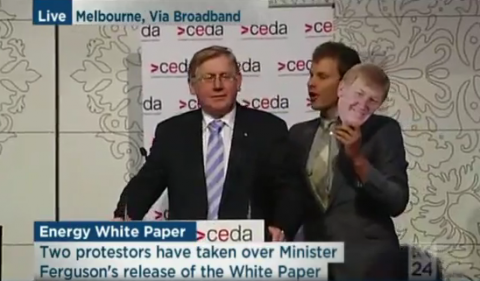 Bet most people used something today that fossil fuel made possible.Global warming,Climate change,Melting ice and sea level rise Is a con made up by the Builderberg Group and CFR to make the elite make more money.Takver follow the money trail and see who is doing research funded by these Criminals then you will see who not to listen too.Takver you have been conned so bad you can't see it.

We need someone with balls and brains to replace Martiin

Great work Twiggy. We need martin removed from office asap and someone with some balls and brains put in there.