A banner drop at a construction site for a new coal loader terminal at the Port of Newcastle in the New South Wales Hunter Valley ended when police instructed the 60 metre crane be lowered to the ground. The Protestors say they were not given warning of this action and alledged it imperiled their lives.

“We are dismayed with the actions of police here today.” said spokesperson Steve Phillips. “We conducted a peaceful protest, with trained and experience climbers, and safety as our priority. NSW Police responded with gross negligence and dereliction of duty, and placed two lives at risk. Our climbers were not even warned before the crane was lowered.” 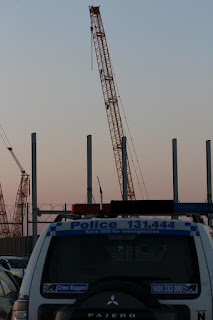 The two activists were both arrested and charged with 'enter enclosed land'. They have now been released and will appear in Newcastle local court on 9th October. Both activists have been reported as safe and well, and are happy with the protest today which stopped work on the coal port terminal site for two hours.

The protest was the fourth consecutive stop-work action against NSW coal projects this week. Activists targeted expansions of the three major elements of the coal chain – mines, railway, and port infrastructure – to highlight the massive expansion of coal mining and infrastructure taking place in NSW, and its impacts on public health and the environment.

“NSW is in the grip of a coal rush. Public health, waterways, ecosystems, and the global climate are under assault,” said Steve Phillips. “Local communities are resisting the coal rush at every step of the way, challenging new mines and port developments that place the profits of coal companies ahead of the public good.”

According to Rising Tide Newcastle who organised today's protest there are 34 coal mine proposals currently before the NSW Planning Department, most of which would produce coal for export through Newcastle. Newcastle is the largest coal export port in the world, and the port terminal expansion will add 66 million tonnes per year export capacity if allowed to go ahead. In 2004, port throughput was around 78 million tonnes, or 10 per cent of the world’s total trade in coal

“But both State and Federal Governments have taken the side of the coal companies. NSW Planning Minister Brad Hazzard and Federal Environment Minister Tony Burke continue to approve every coal project that arrives on their desks. Communities are crying out for help, but governments are ignoring them.”

"Enough is enough. We need to stop the coal rush. It's time for State and Federal governments to stop kowtowing to the mining companies, and get behind community demands for a clean, renewable future."

A spokesperson for Rising Tide Newcastle said the actions of police today which imperiled the lives of two activists will be reported to the NSW Ombudsman. 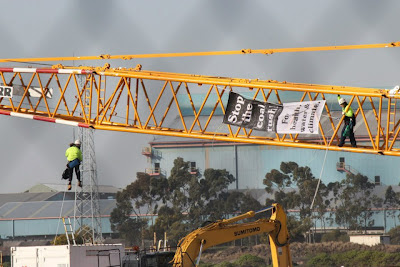 On Monday two activists did a banner drop in central New South Wales, where activists scaled a coal-crushing plant at Boggabri Coal Mine on the Gunnedah basin.

According to a media release by the protestors the NSW Government has recently approved a fourfold expansion of the Boggabri Coal Mine. The two protestors dropped a banner saying: "Stop the Coal Rush: Protect Health, Water, Climate". After more than 8 hours atop the coal-crusher two protestors were arrested and taken to Narrabri Police Station. The men were protesting against the destruction of Leard State Forest, in the Gunnedah Basin, for three open-cut coal mines. A major expansion of the Boggabri coal mine was approved by the NSW Government in July despite community and environmental organisations alledging huge ecological impacts and overwhelming community opposition.

At the same time on Monday activists from Quit Coal dropped a huge banner over the the Victorian State Parliament entrance saying 'Coal is the single greatest threat to civilisation and all life on our planet' Prof. James Hansen, NASA. Why is Baillieu funding coal?"

Between today's protest and the protest at Boggabri coal mine Rising Tide Newcastle also protested on Tuesday the upgrading of rail infrastructure and building a third track in the Hunter Valley to increase the load capacity for exporting more coal.

The Maitland to Minimbah Third Track project is being constructed by Hunter 8 Alliance, which is a consortium of engineering company GHD, construction company John Holland, and the Federally owned Australian Rail Track Corporation. The project aims to lift coal haulage capacity on the Hunter rail corridor to 200 million tonnes per annum. It includes construction of 23km of new rail track, and reconditioning of 9km of existing track. The Federal Government granted $114 million, through the ARTC, to the project.

Activists accessed a Hunter 8 Alliance site at Rutherford and erected a wooden tripod to block access to the site. Activist Ned Haughton scaled the 10 metre high structure, where he remained for the next five and a half hours. Haughton was arrested and charged with obstruction.

Steve Phillips, spokesperson for protest organisers Rising Tide, said: “This railway construction project is designed purely for the benefit of coal corporations, yet it is being paid for with taxpayers money. Why are taxpayers dollars being handed over to rich mining corporations, in order to prop up a polluting industry that is destroying human health and the environment?”

“There is a coal rush under way in NSW, and public health, waterways, ecosystems, and the global climate are under assault. Massive coal mine projects, coal haulage projects, and coal port projects are in the pipeline. If all these projects go ahead, the consequences will be devastating.” concluded Steve Phillips. “We call on State and Federal Governments to abandon their infatuation with mining companies, and their addiction to fossil fuels. It's time to take a stand and stop this coal rush before it's too late.” 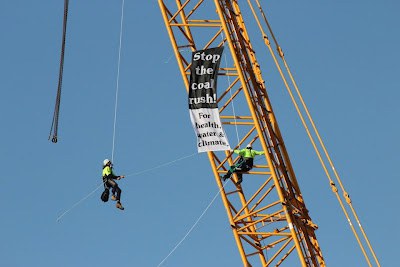 On 5 September Energy Minister Martin Ferguson announced that the Government has abandoned its commitment to shut down some of Australia's dirtiest power plants.

The scheme, called Contract for Closure (CFC), was designed to close stations like the infamous Hazelwood brown coal plant, by paying out the commercial operators. Instead, the program's been scrapped because coal-fired generators remain so profitable that they think their assets are worth more than what the government was willing to pay.

What's particularly hard to swallow about the breakdown in negotiations is now the most emissions-intensive generators are free to continue polluting – and be paid for it, to the tune of $5.5 billion in taxpayer compensation. Hazelwood alone has already received $266 million to continue polluting.

Now, it's being estimated that due to that compensation some of Australia's biggest polluters are actually expected to profit from the carbon price; the exact opposite of what should have been an incentive to either transition to cleaner technologies, or close down. [1]

It means that owners of Australia's most polluting generators are being propped up, at our expense, while they continue business as usual.

Will you tell Cabinet there’s no way big polluters should be able to keep billions in taxpayer compensation to carry on polluting as usual?:

To put this $5.5 billion into perspective, the current compensation is more than enough to fund the full recommendations of the Gonski review into education. It is a massive figure and spent wisely it could do enormous good and reform our ailing public education system.

A recent poll commissioned by GetUp showed the majority of Australians supported the decommissioning of the worst polluters in the energy industry such as the Hazelwood power plant in Victoria and the Playford power plant in South Australia.

Australia is still on track to meet our 5% emissions reduction target despite yesterday's announcement. But we have to do far better than a meagre 5% reduction if we are to do our part in stopping dangerous climate change. Failing to close the worst polluting coal plants makes it even harder to increase the ambition of Australia's climate action in times to come - and every megawatt of power coming from these high emissions plants is just one more obstacle on the path to the strong renewable energy future we've fought so hard for.

The Productivity Commission has already been tasked with evaluating levels of compensation in 2014/15 and to recommend cut-backs if the compensation is found to be too high. Yesterday's news warrants immediate action.  Join us in calling on the Government to review immediately the compensation levels, and to tell us how they will spend the money they're saving by not following through with contracts for closure:

Thanks for helping us build a better future,
The GetUp team.

PS - This announcement means it's more important than ever that we support existing on-the-ground campaigns in the communities of the worst polluting plants. From Hazelwood in Victoria to Playford in South Australia, local groups are organising rallies, petition deliveries and walks to encourage a fast and smooth transition from dirty coal to thermal solar driven power. We'll be in touch next week about ways in which you can contribute to these critical campaigns.