Activists from Quit Coal were able to get a message across this morning: with a banner drop over the main entrance of the Victorian State parliament house. The banner said "'Coal is the single greatest threat to civilisation and all life on our planet' Prof. James Hansen, NASA. Why is Baillieu funding coal?" At the same time activists in central NSW at Boggabri climbed a coal-crusher and dropped a banner which said "Stop the Coal Rush: Protect Health, Water, Climate"

Four activists eluded security and were able to climb the scaffolding at the back of parliament house to the roof to drop the banner just after 9am. Two chained themselves on the roof while two more dropped down with the banner on ropes. Nine other people chained themselves on the steps of parliament house. Protestor Dominic O'Dwyer said from the roof: "We are planning on staying here until the government does something recognising the threat that climate change poses. We would like the government to take the threat of climate change seriously."

Just another Monday morning - hanging out at Parliament House and delivering our anti-coal message to Mr Baillieu. #QuitCoal #SpringSt

The banner was present for a few hours before police peacefully escorted the protestors away. Bolt cutters had to be brought in to cut the chains of people on the steps. According to a police spkeswoman no charges have been laid at this stage.

MR Baillieu when asked about the protest by reporters commented "It will be a matter for the president and the speaker. Those people have endangered themselves but they have also endangered other people."

Dominic O'Dwyer, who chained himself on the roof, told AAP reporter and reported in the Herald Sun "We're disappointed that the government is not taking action on climate change and they've got their head in the sand. That's why we're here today, we're not here today because we enjoy this. We've seen record ice melts in the Arctic this year, that means more bushfires, more severe droughts, worse flooding, which affects millions of Victorian families."

Gavin Jennings, Deputy Leader of the Opposition in the Legislative Council and Shadow Minister of Health, tweeted during the protest:

One of the reasons protestors identified for the action was the State government decision to put $45 million into funding 'clean coal' initiatives along with another $45 million from the Federal Government. Mr O'Dwyer said "For a start they should withdraw that money".

While the protest at the Victorian Parliament House was occurring there was also a protest and banner drop in central New South Wales, where activists scaled a coal-crushing plant at Boggabri Coal Mine on the Gunnedah basin.

According to the media release the NSW Government has recently approved a fourfold expansion of the Boggabri Coal Mine. The two protestors dropped a banner saying: "Stop the Coal Rush: Protect Health, Water, Climate". After more than 8 hours atop the coal-crusher two protestors were arrested and taken to Narrabri Police Station. The men were protesting against the destruction of Leard State Forest, in the Gunnedah Basin, for three open-cut coal mines. 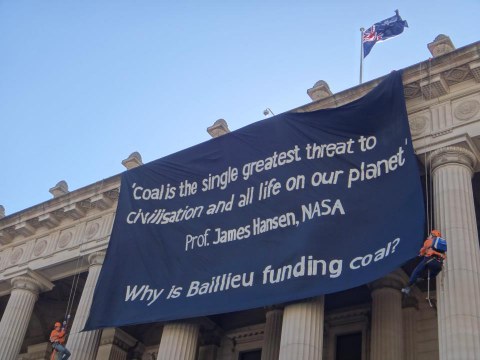 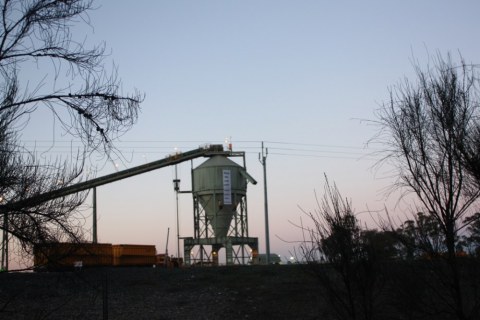