Environment Victoria and other Environment groups like Quit Coal, Greenpeace, Climate Action Moreland, who have been fighting the proposed power station, have claimed the withdrawal of federal funding as a major win in their campaign to stop new coal fired power stations being built. The $100 million funding was promised by the Howard Government if certain project milestones were met, which the company has not been able to fulfill.

Martin Ferguson said in a media release “The Government made it clear in February this year that it would grant one final extension until 30 June 2012 for HRL to meet the conditions,” Minister Ferguson said. "It has not done so and, accordingly, the funding agreement between HRL and the Australian Government will be terminated.

“This is an extremely welcome decision by Minister Ferguson and the federal government to cancel HRL’s funding. This proposal is out-of-date, highly polluting and inconsistent with the steps we are now taking to begin cleaning up our power supply.

“This is likely to be the final nail in the coffin for the HRL proposal, and for all new coal-fired power stations across Australia.

“Australians overwhelmingly want a clean energy future. It’s great news that the Federal Government has recognised this, and is taking action in the right direction.

“Today’s decision is a testament to the tens of thousands of Victorians who’ve campaigned to stop HRL over many years. It shows that people power does work, and that when the community is united in their voice for clean energy we can win."

HRL has been unsuccessful in attaining loans from the big four Australian banks for the project. It is also likely to lose funding from the State Government which awarded the company $50 million to develop the coal gasification technology for the proposal. It is believed up to $20 million of this funding may have been already spent.

Mark Wakeham from Environment Victoria said "We now call on the Victorian Government to keep their word and withdraw their $50 million grant to the HRL project. It would put a halt to this polluting project and would free up funds for much needed projects such as the National Disability Insurance Scheme or large scale solar in northern Victoria."

This marks a turning point for coal based electricity generation in Australia. It is now very likely that no new coal fired power stations will be built. This comes at a time when renewable energy is becoming cheaper to produce despite the subsidies to the coal industry and the onerus planning regulations for wind farm development in Victoria and NSW.

There has also been dramatic reduction in the cost of solar photovoltaic (PV) power which has made solar increasingly competitive with grid supplied electricity. Demand for electricity, rather than rising the last 3 years, has levelled out. Renewable energy in Australia is no approaching 10 per cent. 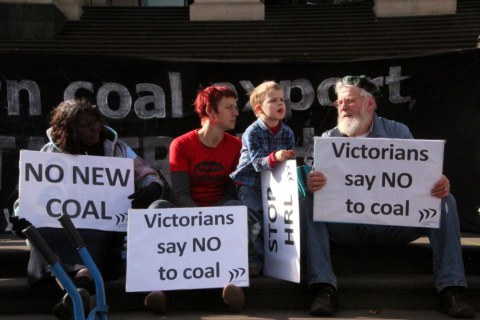