The substantive charges against the Max Brenner 19 (besetting and trespass in a public place) have been dismissed this morning in court. 5 defendants are however still in court fighting specific charges of resist arrest and assault police.

The decision on the substantive charges is nonetheless a big win for our right to protest in public places in Melbourne. We have beaten back their attempts to criminalize dissent and their attempts to silence a public pro-Palestine voice in Australia.

The magistrate Simon Garnet found that QV square is a public place and is subject to the same laws as other public lanes and spaces in Melbourne. He said in his final ruling: “In my opinion, the owners of QV and therefore QV management, by virtue of the Square and lane ways being subject to the S173 Planning and Environment Act agreement and therefore a ‘public place’… did not have the legal authority to apply conditions on members of the public who wished to enter QV square.”

He also ruled that to convict on the basis of the signs that QV management erected to dissuade protest would be a contravention of the Victorian charter of human rights. These signs said that people who wanted to demonstrate “against the political or social interests of a retail tenant of this shopping center” would be trespassing.

To quote the magistrate’s ruling directly “To interpret s9(1)(d) as submitted by the prosecution would, in my opinion, contravene their right to “freedom of expression” as enacted in the Charter. In addition, a refusal to leave after being requested to do so on the basis that the protesters were; “demonstrating disapproval of the political or social interests of a retail tenant of this shopping centre” is also not compatible with those human rights. I

Defence lawyer Rob Starry, who acted for some of the accused, said the decision had wide-ranging ramifications. “This case is really a landmark case in the annuls of the criminal justice system because what it represents is people have a right to express themselves politically,” he said.

Mr Starry said the decision could affect similar Occupy Melbourne protests and current industrial protests including the Toll blockade. “The Toll blockade is an industrial dispute, it should not involve the police unless there is a breach of the peace or other criminal behaviour but that has not been the case,” he said.

The defendants would like to thank all those who have shown us both moral and material support during the trial and we would invite you to join us:

This Tuesday (tomorrow) 8pm onwards John Curtain hotel (opposite Trades Hall on Lygon St) for a celebratory drink
This Friday 27th at 5:30pm to an action RECLAIM QV SQUARE. It is vital, given the court’s decision to re assert our right to demonstrate in Melbourne’s public places. Students for Palestine has invited both those who support Palestine and other progressive activists to join us in taking back our public squares from Melbourne’s corporations.
https://www.facebook.com/events/397724523612319/ 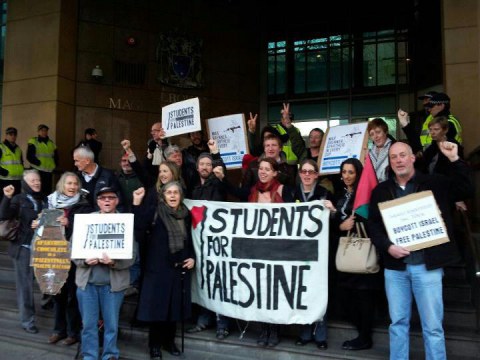