A picket by workers at Toll warehouse in Somerton in Melbourne began on July 10th. The workers are paying parity of conditions and pay as workers in other Coles warehouses. Workers at Toll are paid significantly less, do not receive RDO's, are forced to work on public holidays and suffer from poor health and safety. A Community Assembly has been called to back the NUW led strike. Differences in terms of tactics exist with many leftist groups urging support for the NUW leadership of the strike whilst the Socialist Equality Party is calling on workers to break free from the NUW and form independent strike committees.
Related: Coverage in The Age -- Analysis from the Socialist Equality Party -- Photos on Flikr -- Solidarity protest at Coles stores -- Workers Solidarity Network fliers -- Updates on strike from Socialist Alternative

Threat of legal action by Toll against strke

On July 13th Fair Work Australia dismissed Toll's attempts to have the picket declared "illegal" industrial action. Toll has now announced it is seeking an injunction on the 14th of July in the Supreme court against a number of individuals involved in the picket.
Coles stoush heads to the Supreme Court

The Supreme Court has now granted an injunction against a number of NUW and community members. It has demanded that trucks be allowed back into the Somerton warehouse. Police action against the picket is now increasingly likely/
Coverage in the SMH

Workers at a Coles Wharewhouse in Goulbourn refused to do extra work to make up for the strike at Toll and briefly walked off the job. Age Report.

Coles went to FWA to receive an order and have the industrial action by the Goulbourn workers declared illegal.

Ways of supporting the strike

1) Visit the picket on the corner of Union Rd and Somerton Rds, Somerton.

3) Donate to the striking workers, to make up for the pay they’re losing while on strike.

(Please specify that donations are for Toll workers)

4) Download this flyer, and distribute it in Coles stores near you.

5) Email the CEO of Coles and tell him to respect workers rights at Ian.Mcleod@Coles.com.au

Social media links and other links

- Get the NUW perspective at the NUW EBA facebook page

- Get the Socialist Alternative perspective and updates here 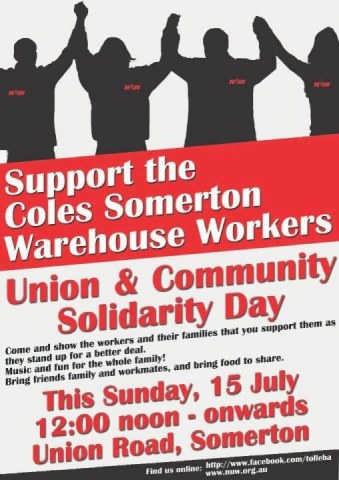 Re: Picket of workers at Toll Coles Distribution warehouse ...

Re: Picket of workers at Toll Coles Distribution warehouse ...

Management has been intimidating individual strikers, ringing them to urge them to return to work!