Delta Electricity this afternoon announced the closure of the 45 year old Munmorah coal fired power station at least partly due to the introduction of the carbon tax. The power station is located on the shores of Lake Munmorah on the central coast of NSW between Sydney and Newcastle.

Reasons for the closure being cited by Delta Energy include the reduction in energy demand in NSW resulting in an excess in electrictiy supply, the aging nature of the infrastructure and the high cost of maintenance, and that "the carbon tax further erodes its viability."

The local Wyong shire Council and environment activists wanted Munmorah decommissioned due to environmental reasons with any rehabilitation likely to result in 4.2 million tonnes of greenhouse gases a year, according to a report in the Lakes Mail.

Greenpeace activists successfully closed down the power station in November 2007 in protest about the lack of action on climate change mitigation.

The station had been operating in standby mode since 2010, with the last production for the grid in August 2010. Constructed with 4 350MW generators with a total capacity of 1400MW which went into production 1967 to 1969. Two units were decommissioned during the 1990s. Unit 4 last operated in March 2009 and unit 3 operated until August 2010 participating in a pilot carbon capture project.

The staff of 100 that worked Munmorah have been reassigned to work at the Vales Point power station according to Delta’s Chief Executive Greg Everett.

"The process of decommissioning will require staff activity at Munmorah over the coming weeks and we will consult with staff and unions on the structure of the business for the longer term", said Delta CEO Greg Everett.

The Delta Energy media release says that there is development consent for the site to be rehabilitated for coal or gas fired power station but "this would require substantial new capital investment by a future owner."

The "clean coal" carbon capture pilot project was established in 2007 with State Government funding of $5million; the first phase of $150 million carbon capture development to be jointly funded by coal companies and the state. The pilot plant was run by Delta Energy and the CSIRO. The pilot plant went into operation in 2009 and used a post combustion ammonia absorption technique to extract the carbon dioxide. As storage was not part of the pilot program the 3000 tonnes captured per year were then released to the atmosphere, according to the zeroco2.no Munmorah project page.

According to Delta Electricity the "pilot plant exceeded its targets for capture rate, carbon dioxide purity and sulphur removal". The NSW Government project website noted that capture rates greater than 90% were achieved with high purity CO2 greater than 98.5% and high sulphur dioxide removal.

The pilot plant was relocated to Vales Point for further research during 2012 for scaling up to a demonstration plant. But a suitable site for geosequestration of the liquid carbon dioxide is still being researched. Stage 1 development is set to start in 2013. CSIRO scientists are heavily involved in researching post combustion capture and underground CO2 storage.

Part of the problem with underground storage - geosequestration - is ensuring the geological seal on the liquid CO2 remains tight. A leak of CO2, even a relatively minor one, would undo all the mitigation action achieved with carbon capture and storage process.

The problem is large scale storage of CO2 in rock formations can contribute to seismic activity which may result in leakage. A new scientific study by Stanford University Earth Science professors Mark D. Zobacka and Steven M. Gorelick argues that large scale geologic storage of carbon dioxide may very well trigger earthquakes. The authors say in the article abstract that carbon capture and storage is far to risky and expensive for use on the scale required for climate mitigation. You can read more on this issue and recent scientific research in my article: Carbon capture and storage and the Melbourne Earthquake.

Another issue with carbon capture and storage retrofitted to coal fired power generators is that they lock-in fossil fuel dependency and addiction to coal. Neil Perry, a senior lecturer at the University of Western Sydney presents this issue - Carbon lock-in: social-technological inertias increasing our addiction to coal-fired energy on the Conversation website.

Clearly weaning ourselves off carbon emissions and coal dependency is going to be painful and involve much more campaigning and pressuring government and businesses to adopt clean energy behaviours. The carbon price scheme implemented on 1 July 2012 and the closure of Munmorah is just a first small step. 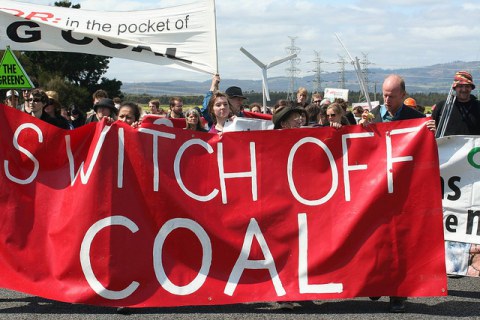 You track record is not good Takver what do you have to say?????

This is what was said on SATURDAY, OCTOBER 23, 2010
The CSIRO and Bureau of Meteorology have warned for several years that overall Australia to get hotter, wetter, with more extreme weather and that south eastern and south western Australian regions are showing a definite trend of changing to a more drier climate.
http://takvera.blogspot.com.au/2010/10/csiro-south-east-australia-becomi...
The South east of Australia is wetter not drier

This is what was said on 11 Nov 2009 Climate Emergency Action Network spokesman John Rice said in an AAP report "Adelaide's unprecedented November heatwave is classic climate-change weather. We need politicians to show real leadership and begin to seriously address the climate emergency today."
http://indymedia.org.au/2009/11/10/its-getting-hot-in-here-november-heat...
Looks like we are not having classic climate-change weather now hey?

This is what was said on Fri 20 Nov 2009
By takver
“In 2007 our research showed fire danger increasing as emission levels rise and that a new ‘catastrophic’ category would be needed. Tragically, since then Australia has seen devastating uncontrollable ‘fires of climate change’ in Victoria,” said The Climate Institute CEO John Connor.

Peter Marshall, national secretary of the United Firefighters Union of Australia,said that "We are not scientists but we are the people on the front line," he said. "If there is not action put in place now, Federal Government's research says that places such as Canberra by 2050, the type of fires we've seen here in 2002 will happen on an eight-year basis."

"We are asking you very clearly, stop making this a political football, put in place the action that's required to secure the future because by 2020 we are going to see a frequency like we've not seen before." he was reported by ABC News as saying.

Firefighters demanded action on climate change from politicians in Canberra on November 19 while much of south eastern Australia sweltered and suffered with temperatures well above 30 degrees.
http://indymedia.org.au/2009/11/20/firefighters-turn-climate-heat-on-can...
Where is the bush fires now? just more alarmist rubbish.

Here's what Takver had to say on Wed 09 Dec 2009
Australia had its third-warmest year on record, with three major heatwaves: the first in January/February which resulted in catastrophic bush fires which killed 173 people in Victoria, the second in August affecting sub-tropical Australia, and the third in November braking several temperature records and causing catastrophic bush fire alert to be declared for several regions.

In answer to you question No! but don't worry I'm sure we will get the hot summers again that we all enjoy because our weather goes in cycles and has nothing to do with the air we breath out (carbon dioxide)LOL

Here is more rubbish on Wed 16 Dec 2009
Increasing frequency and intensity of droughts also forces Koalas to descend from trees in search of water or new habitats. This makes them particularly vulnerable to wild and domestic predators, as well as to road traffic, often resulting in death.

With extreme bushfire weather becoming more frequent and intense, koala populations are on the frontline of the effects of climate change unable to flee from an inferno. One of the iconic images of the Black Saturday fires in Victoria that killed 173 people was of a CFA volunteer sharing a bottle of water with Sam the Koala.
http://indymedia.org.au/2009/12/15/iucn-report-koalas-threatened-by-clim...
Hows the Koalas going now Takver? you were being a bit of a Alamist back then.But it is good to know that the Koala won't have to travel far for water now because the moisture in the eucalyptus leaves should be enough after all the rain we have had in the last two years.

Here is what Takver said on Tue 16 Mar 2010
In a joint statement released on Monday by the CSIRO and Bureau of Meteorology the stark facts on global warming were outlined: that Australia's climate has already changed with more extremely hot days, fewer cold ones, wetter in the north and drier in the south-east and south-west. The statement outlined in five sections a snapshot of temperature, rainfall, oceans, atmosphere, and what this means for Australia in coming decades.
While annual rainfall has remained stable averaged out across the continent, there is a strong trend for more rain in central and northern Australia, and less in the southwest, south, southeast, and east coasts, where much of the population is located.
http://indymedia.org.au/2010/03/15/scientists-affirm-australias-climate-...
It is very wet here in the south, southeast, and east coasts the Alarmists are wrong again.

And wrong again on Sat 09 Jul 2011
He was addressing the International Union of Geodesy and Geophysics conference in Melbourne this week regarding recent research on changes to atmospheric circulation, storm intensity and reduction in winter rainfall in Australia.
http://indymedia.org.au/2011/07/09/scientist-less-rain-across-southern-a...