Angry TAFE teachers and students attended a rally today to protest the massive cuts to TAFE vocational education and training in the Victorian Budget handed down on May 1, 2012. The implications of massive defunding is a softening up of the public TAFE institutes for privatisation. The budget cuts will mean substantial redundancies of teachers, especially in smaller regional TAFE institutes, a major increase in course fees, and loss of subsidiary student services such as study skills assistance, library services and counselling.

Almost certainly other conservative state Governments are watching to see if the Baillieu Government can get away with such a major attack on public vocational education and training.

Unions have called for Victorian Premier Ted Baillieu to reverse the major reduction in public funding for TAFE. Victorian NTEU secretary Colin Long said in a media release before the rally:

"The entire TAFE sector, management, staff and students, are united in their opposition to the cuts, which will slash nearly $300 million off grants to Victoria's 18 TAFE institutes," said NTEU Victorian Secretary, Dr Colin Long.

"As a result of these cuts the state's 350,000 TAFE students will have to pay far more in course costs, up to triple the amount in some instances, face increased class sizes and receive less support while they study."

"The cuts could also result in up to 1500 teaching and administration jobs being lost."

"It is almost certain some institutes will be forced to amalgamate or close, courses will be cut, communities will lose a valuable asset."

"The multiplier effect from job losses and potential courses closes will be particularly serious for regional Victoria."

"The extent of these cuts defies rational explanation. Our state is in the grip of a major manufacturing downturn with thousands of workers facing unemployment, and the government's response is to destroy one of the key solutions to it, our public TAFE system."

Mary Bluett from the AEU told the crowd (Watch Youtube video) "there had been a budget blowout in the skills area because of the rorting of the current system by spineless and mean spirited private providers" who do the bare basics in delivering certificates in a minimal time. She told the crowd that last year there was a $40million cut in funding to the four largest metropolitan TAFE institutes to make up for the rorting and bad business practices of private training providers. This resulted in over 300 redundancies, and reduction in courses offered.

This time around it is "$300million to be cut and ripped out of TAFE for the money to go to private providers" she said.

"The social and economic future of this state depends on the quality of education and in terms of jobs, that there is quality TAFE provision in the state of Victoria. We have seen 43,000 jobs lost in this state in the last 12 months. Where do those people go to get retraining and another chance of employment? Our Public TAFEs! Without our public TAFEs those people will have nowhere to go, and in fact many of our own TAFE members both teachers and support staff are going to join the ranks of the unemployed."

"It is a criminal act of economic and social vandalism that this Government is wrecking on the Victorian TAFE system."

"It has got to stop. And we will be here for our students, the future of TAFE, and we will take this campaign for as long as need be right up to the next state election where we will remind Ted Baillieu: He promised to wind back the Skills reform, He promised to invest in TAFE." concluded Mary Bluett.

NMIT TAFE student and mental health nurse Andrea outlined the impacts on students. (Watch Youtube video) She has experienced both private training providers and the public TAFE system. "We need you Mr Baillieu to know that our education, our employment, and our futures are important. And that all Victorians benefit from the work that is and will be done by TAFE graduates."

Colin Long from the NTEU highlighted the essence of the Baillieu Government in choosing to build prisons rather than funding TAFE. (Watch Youtube video) "Let's be clear about this. This is a Government which has chosen to build prisons and close TAFEs. Lets not be confused about the rhetoric of a tough budget for tough times. This government has made choices where it spends it's money and it is puting a billion dollars into prisons while it cuts hundreds of millions out of TAFE. What sort of priorities are those?"

Colin Long also pointed out that the public sector cuts ocurring in Victoria are bigger on a per capita basis than the cuts going on in Greece. He called for a fightback like what has occurred against the austerity cuts in Greece. "It is time for us to reject the nonsense of the free market peddlers once and for all in this state, this country"

Colin Long's criticism was also directed at the Brumby Labor Government before Baillieu, "But lets not forget that the ALP opened the gate and let the barbarians in. So, the ALP needs to show where it really stands. There is an opportunity for it to cast aside the free market madness that has infected it for years. To show it stands with TAFE teachers, students and local communities in fighting for quality accessible public education."

Brian Boyd passed on full support for the campaign from the Victorian Trades Hall Executive and the Victorian Union movement. (Watch Youtube Video) "Vocational education and training is crucial for our nation and our state. We hear from politicians talking about the skills shortage - they rave and rant about it...we need the TAFE system more than ever, not less. What Mr Baillieu has decided to do is junk the TAFE system just as we need it the most to develop our great country." he said.

Many Institutes are still modelling where to cut back. On the morning of the rally it was announced by Bendigo TAFE of a reduction infunding of $8-$9million, plus loss of 120 jobs. These are jobs in regional Victoria where employment can be scarce and the local community is often dependant on skills retraining offered by the local TAFE Institute. The NTEU noted in their media release the following potential impacts so far:

In a classic case of media spin and hypocrisy Minister Peter Hall issued a media release during the rally accusing the unions of disrupting classes. Never mind what this Liberal Government is doing in emasculating the public TAFE education system. 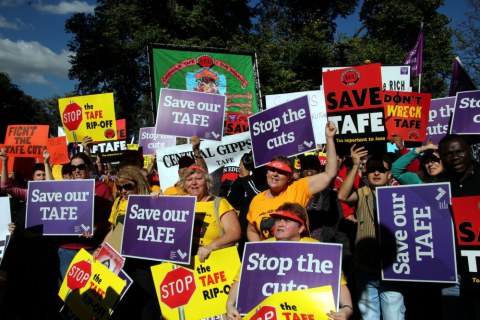 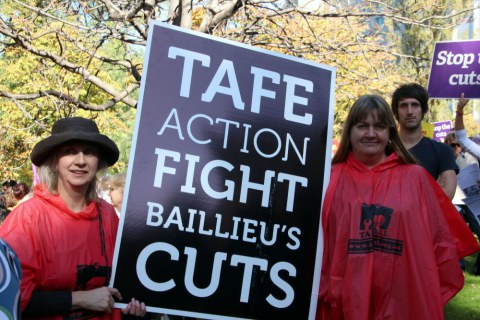