New research into ocean salinity levels has revealed a strong global water cycle intensification during the period of 1950 to 2000. The researchers report the rate of change in the global water cycle is double the rate projected by current-generation climate models. The study found "robust evidence of an intensified global water cycle at a rate of about eight per cent per degree of surface warming," said study co-author Dr Durack, a post-doctoral fellow at the Lawrence Livermore National Laboratory in the US.

"Changes to the global water cycle and the corresponding redistribution of rainfall will affect food availability, stability, access and utilization," Dr Durack said in a CSIRO media release.

Measures of global changes in the water cycle are complex as 71 per cent of the earth's surface are oceans or seas where detailed measurements cannot be as easily undertaken as on land. In December 2011 I wrote about scientists reporting the southern ocean becoming warmer, freshening and becoming more acidic.

"The ocean matters to climate - it stores 97 per cent of the world's water; receives 80 per cent of the all surface rainfall and; it has absorbed 90 per cent of the Earth's energy increase associated with past atmospheric warming," said co-author, Dr Richard Matear of CSIRO's Wealth from Oceans Flagship.

"Warming of the Earth's surface and lower atmosphere is expected to strengthen the water cycle largely driven by the ability of warmer air to hold and redistribute more moisture." said Dr Richard Matear.

So scientists looked at salinity changes through examining 50 years of data gathered from a variety of instruments and locations. It is only recently - in the past decade - with the rollout of 3000 Argo buoys in the oceans of the world that comprehensive measurements have been able to be gathered. Argo buoys collect water temperature and salinity and other measurements from the surface to 2000 metres depth every 10 days. 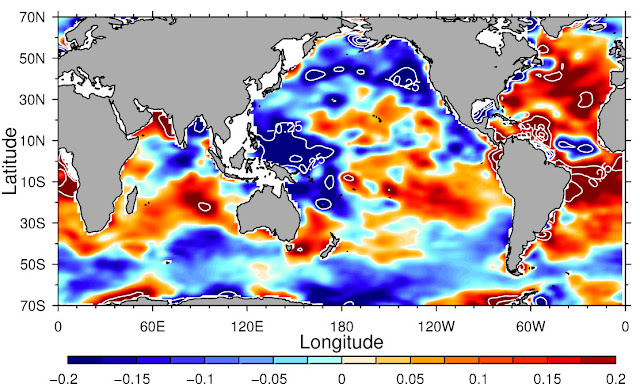 By looking at observed ocean salinity changes and the relationship between salinity, rainfall and evaporation in climate models, the researchers determined the water cycle had strengthened by four per cent from 1950-2000. This is twice the response projected by current generation global climate models.

More moisture in the atmosphere means storms can carry more rain to produce heavier, more intense rain events causing flashflooding and damage to agriculture and human infrastructure and posing a risk to life. This will increase the damage from extreme weather events, which are likely to increase in intensity and perhaps in some cases frequency. Already the IPCC has released a report on Extreme weather, risk management and adaptation in a warming climate.

The study was funded through the Australian Climate Change Science Program, a joint initiative of the Department of Climate Change and Energy Efficiency, the Bureau of Meteorology and CSIRO. Dr Durack is a graduate of the CSIRO-University of Tasmania Quantitative Marine Science program. 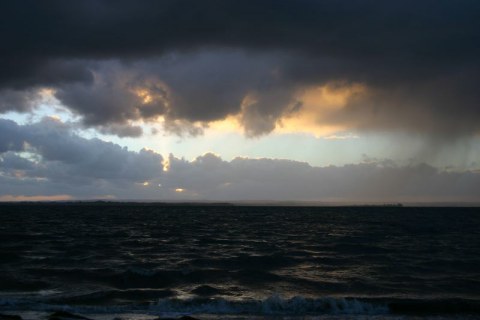 Revelations from the Climategate emails, originating from the Climatic Research Unit at the University of East Anglia showed how all the data centers, most notably NOAA and NASA, conspired in the manipulation of global temperature records to suggest that temperatures in the 20th century rose faster than, in reality, they actually did.

This has inspired climate researchers worldwide to take a hard look at the data proffered by comparing it to the original data and to other data sources. This report compiles some of the initial alarming findings.

There has clearly been some cyclical warming in recent decades, most notably 1979 to 1998. However, the global surface-station data is seriously compromised. First, there is a major station dropout and increase in missing data in stations that remained which occurred suddenly around 1990; about the time the global warming issue was being elevated to importance in political and environmental circles. A clear bias was found towards removing cooler higher elevation, higher latitude, and rural stations during this culling process though leaving their data in the base periods from which ‘averages’ and anomalies are computed.

The data also suffers contamination by urbanization and other local factors such as land-use/land-cover changes and improper siting. There are uncertainties in ocean temperatures; no small issue, as oceans cover 71% of the earth’s surface.

These factors all lead to significant uncertainty and a tendency for overestimation of century-scale temperature trends. A conclusion from all findings suggest that global data bases are seriously flawed and can no longer be trusted to assess climate trends or rankings or validate model forecasts. And, consequently, such surface data should be ignored for decision making.

And D’Aleo and Watts summarize their findings in the following 15 points:

1. Instrumental temperature data for the pre-satellite era (1850-1980) have been so widely, systematically, and unidirectionally tampered with that it cannot be credibly asserted there has been any significant “global warming” in the 20th century.

3. All of the problems have skewed the data so as greatly to overstate observed warming both regionally and globally.

4. Global terrestrial temperature data are gravely compromised because more than three-quarters of the 6,000 stations that once existed are no longer reporting.

5. There has been a severe bias towards removing higher-altitude, higher-latitude, and rural stations, leading to a further serious overstatement of warming.

7. Numerous peer-reviewed papers in recent years have shown the overstatement of observed longer term warming is 30-50% from heat-island contamination alone.

8. Cherry-picking of observing sites combined with interpolation to vacant data grids may make heat-island bias greater than 50% of 20th-century warming.

9. In the oceans, data are missing and uncertainties are substantial. Comprehensive coverage has only been available since 2003, and shows no warming.

10. Satellite temperature monitoring has provided an alternative to terrestrial stations in compiling the global lower-troposphere temperature record. Their findings are increasingly diverging from the station-based constructions in a manner consistent with evidence of a warm bias in the surface temperature record.

11. NOAA and NASA, along with CRU, were the driving forces behind the systematic hyping of 20th-century “global warming”.

12. Changes have been made to alter the historical record to mask cyclical changes that could be readily explained by natural factors like multidecadal ocean and solar changes.

13. Global terrestrial data bases are seriously flawed and can no longer be trusted to assess climate trends or VALIDATE model forecasts.

14. An inclusive external assessment is essential of the surface temperature record of CRU, GISS and NCDC “chaired and paneled by mutually agreed to climate scientists who do not have a vested interest in the outcome of the evaluations.”

15. Reliance on the global data by both the UNIPCC and the US GCRP/CCSP also requires a full investigation and audit.

Knox and Douglass analysed Argo float temperature data for the period from 2003 to 2008 to estimate changes in ocean heat content (OHC). They state that “Our four estimates of the recent OHC trend for 2003–2008 adequately consider interannual variability and we find that the trend is negative”. That is that the ocean heat content has been falling and not increasing.
http://thegwpf.org/the-observatory/2200-global-warming-missing-energy-ro...

Josh Willis was looking at a map of global ocean temperatures measured by a flotilla of autonomous, underwater robots that patrol the world’s oceans. The devices—Argo floats—sink to depths of up to 2,000 meters, drift with the currents, and then bob up to the surface, taking the temperature of the water as they ascend. When they reach the surface, they transmit observations to a satellite. According to the float data on his computer screen, almost the entire Atlantic Ocean had gone cold.
http://earthobservatory.nasa.gov/Features/OceanCooling/

Der Spiegel: The Ocean’s Influence Greater Than Thought
By P Gosselin on 24. September 2010
Alex Bojanowski at Germany’s online Der Spiegel reports here on a new paper appearing in Nature that shows climate change in the 1970s was caused by ocean cooling. Climate simulation models once indicated that the cooling in the 1970s was due to sun-reflecting sulfur particles, emitted by industry. But now evidence points to the oceans.

I don’t know why this is news for the authors of the paper. Ocean cycles are well-known to all other scientists. The following graphic shows the AMO 60-year cycle, which is now about to head south.

Computer models simulating future climate once predicted that it would soon get warm because of increasing GHG emissions, but, writes Der Spiegel, citing Nature:

Now it turns out that the theory is incomplete. A sudden cooling of the oceans in the northern hemisphere played the decisive role in the drop of air temperatures.

A huge amount of energy was taken out of the oceans. The scientists said that it was surprising that the cooling was so fast.

This shows, again, that the climate simulation models used for predicting the future are inadequate. It’s not sure what caused the oceans to cool. But scientists are sure that aerosols were not the cause. Der Spiegel describes a possible scenario how the oceans may have cooled:

Huge amounts of melt water from Greenland’s glaciers poured into the Atlantic at the end of the 1960s, and formed a cover over the ocean. The melt water cooled the ocean for one thing, and acted to brake the Gulf Stream, which transports warm water from the tropics and delivers it to the north. The result: the air also cools down.

But, as Spiegel reports, that hardly explains why there was also cooling in the north Pacific. Der Spiegel:

The scientists will have to refine their climate simulations. The new study shows one thing: The influence of the oceans is greater than previously thought.

I’d say that’s a very polite way of saying: Your models have been crap, and it’s back to the drawing board. This time don’t forget to properly take the oceans and every thing else into account. Yes, there’s a quite a bit more to climate than a single trace gas in the atmosphere. Hooray – the warmists are finally beginning to realize it! (Maybe)

Research for mineral resources in the Arctic may be hampered by a global trend towards colder weather rather than global warming, a Russian scientist said on Friday.
Prof. Oleg Pokrovsky of the Voeikov Main Geophysical Observatory (MGO) said the cold snap began in 1998 and the temperatures are predicted to return to the lows of the 1950s-1960s and reach their peak in 15 years.
Despite the predictions of global warming, which has been the greatest economic and political challenge, most parts of the world have recently seen widespread low temperatures and extremely heavy snowfalls.
"Now all the components of the climate system are entering the negative phase. Politicians who placed their bets on global warming may lose the pot," Pokrovsky said at a conference on marine research in the Polar regions.
The scientist explains the possible climate miscalculation by the fact that most meteorological stations in the United States are located in urban areas which are affected by the city's microclimate where the temperature is usually higher.
"We do not know everything that happens. The climate system is extremely complicated and the Intergovernmental Panel on Climate Change (IPCC) is not the highest authority," Pokrovsky said.
The scientist has warned, however, that global cooling could jeopardize the race of world powers for the largely unexplored mineral resources in the Arctic, which has recently intensified.
"The northern marine passage will freeze and it will be impossible to pass through it without icebreakers," Pokrovsky said. "I think the development of the shelf will face large problems," he added.
http://en.rian.ru/Environment/20100423/158714403.html

1998 was the year (666x3) otherwise known as the end of the fifth sun to the ancients & the beginning of the sixth sun, 1998 was when the Sun began to expand its outer layer. We only have another 500 million or a billion years left to evacuate this planet, Mars will be a safe haven for many billions of years for us.