PLM statement on increased US military presence in the Philippines

The people are now being informed, through media reports, about the possibility of military agreements between the US and the Philippines that would increase US troop presence in the country. There has also been a flurry of diplomatic activities in the recent period: visits by a US delegation to the Philippines headed by right-wing Republican John McCain, and Philippine government delegations are currently negotiating in the US. We are being assured by the DFA, in what is really a red herring and an attempt to distract us with a false debate, that what is being discussed is a ‘rotation’ of troops and not ‘bases’ and so on. The ‘threat’ of China is being used as the justification, especially in relation to the competing claims to the seas surrounding the pieces of rock named the Spratly Islands – the West Philippine Sea, also known as the South China Sea.

There have always been ‘bogeymen’ used to justify US military intervention in the region and around the world. There was the ‘cold war’, against the threat of communism that resulted in the Vietnam War. This was then followed by ‘the war against terrorism” and the invasion of Iraq on the pretext of Saddam Hussein’s ‘weapons of mass destruction’. Now we have the ‘nuclear threat’ in Iran and the ‘China threat’ to ‘economic and security’ interests. The pro-US lobby in the Philippines has been working overtime in a campaign to project China as a threat.

This line comes straight out of the Pentagon to justify a newly updated US military strategy to secure US economic and national interests adapted to the current global context. This includes the withdrawal of US troops from Iraq, plans to wind down its forces in Afghanistan, as well as the most severe global economic crises since the 1930s Great Depression. The US military strategy now places a renewed focus on Asia and the Pacific, with China identified as presenting special concerns that the US must confront.

According to a Pentagon document entitled ‘Sustaining U.S. Global Leadership: Priorities for 21st Century Defence’ released this January, US economic and security interests “will have to necessarily rebalance towards the Asia Pacific region”. The document also targets China stating that “Over the long term, China's emergence as a regional power will have the potential to affect the U.S. economy and our security in a variety of ways...The U.S. will continue to make a variety of investments to ensure that we maintain regional access and the ability to operate freely.” These ‘investments’ include beefing up its military alliances with countries considered to be its traditional allies in the region, such as the countries in ASEAN, and drawing them in to an anti-China alliance.

This is a region where the US has a savage history of colonial conquests and has historically maintained a strategic presence. Some 22,000 US troops have been permanently based in Korea and around 35,000 in Japan. Nearly half of U.S. Air Force F-22 jet fighters have been based in the Asia Pacific region. Two U.S. aircraft carriers have always been around in the region. US historic allies in the region, junior partners such as Australia, are also beefing up their military agreements with the US. The new Australia-US deal announced in 2011 will allow for 250 US marines to be stationed in Darwin this year, increasing to 2,500 by 2016. Darwin, a city situated on the northern tip of the Australian continent, provides strategic access to the South East Asia region.

Though US officials keep on harping about the China threat, they still have to concede that the country is nowhere near achieving any kind of parity in military capabilities with the US. For example, while there are several hundred US military bases around the world, China has none outside of its territory. Although the US military budget had been trimmed, US military spending would still continue to remain higher than the combined military budgets of the next 14 biggest militaries in the world.

China, on the other hand, was brutally colonized by several imperialist powers, which only ended with the victory of the Chinese revolution. The initial gains of the Chinese revolution, however, have been undermined in the wake of post-1978 modernization and a lot is to be desired when one judges China by the yard stick of socialism. Nevertheless, its domestic economic advancements are remarkable and its growing role as a counter-weight to unipolar imperialist domination is an important factor in global realignments.

The keyword in Chinese foreign policy parlance has not been superpower but multipolarity, as opposed to a unipolar world. In its quest for a multipolar world, China is seeking closer strategic cooperation with Russia and the Central Asian republics within the framework of Shanghai Cooperation Organisation, and closer bilateral and multilateral economic cooperation with major developing countries like India and Brazil. China has also come up with the idea of ending the US dollar's prolonged reign as the universal currency of international exchange. China has suggested that as a medium of international transaction, the US dollar should be replaced by a supranational currency basket like the Special Drawing Rights (SDR) used by the IMF.

Around the Spratly Islands dispute however, despite its claims that it stands for a regional political settlement, China has displayed an aggressive nationalism, flexing its military muscle against Vietnam and to a lesser extent the Philippines.

China has responded strongly in its defence, stressing that it stands for peaceful development and for a negotiated regional settlement to the disputed claims surrounding the Spratlys. The People's Liberation Army Daily has accused the U.S. of targeting China, by bolstering its military alliances in the Asia Pacific region, while also seeking more entry rights for military bases around China. The state-owned Xinhua news agency advised the Obama administration to abstain from flexing its muscles. There have also been calls from within China to place economic sanctions against countries supporting the US anti-China alliance. The state-owned China Daily published an editorial piece calling for the Chinese government to pursue economic sanctions against the Philippines.

So how should smaller nations defend their national interests in this context? The Partido Lakas ng Masa (PLM) believes that the Philippines government best serves its national interests by pursuing an independent foreign policy, in keeping with the Philippine constitution. To line up with the US in an anti-China alliance will seriously undermine our position in the region as an independent nation, with unforeseen consequences, possibly for decades to come. It reinforces the former colonial relationship and Philippines subservience to the US, precisely at a conjuncture of a rapidly changing world, where a policy of independence and non-alignment is necessary. Major developing countries are emerging with greater economic and strategic clout, pro-people’s governments are creating new regional blocs and alignments, such as in Latin America, and peoples’ movements in the Middle East are challenging the old pro-imperialist status quo. In simply lining up with the US, the Philippine government has demonstrated its lack of foresight and absence of leadership in crafting an independent vision and path for the country.

An anti-China alliance also entails the risk of the Philippines becoming a target for China’s trade and economic retaliation. Strong cooperation with China serves our economic interests. In keeping with this, the Philippines government must also push for a policy of non-alignment, within ASEAN, and lead the way in uniting the smaller countries in the region around a platform of non-alignment in dealing with major military and economic powers. Such a policy will place the Philippines in the best position to stand up to China’s bullying tactics in relation to the Spratlys and pursue a negotiated settlement, along with our ASEAN neighbours.

PLM also calls for the democratisation of all foreign policy negotiations and dealings by the Philippine government. Foreign policy is a continuation of domestic policy and has important ramifications for people’s welfare. Therefore we condemn all secret negotiations, as has been the case to date, and call for transparency and public accountability from the government.

We have a proud history of struggle against imperialism of all varieties: Spain, Japan and the United States. The peoples movement in this country succeeded in closing down the US bases in Clarke and Subic in 1991 and 1992, putting an end to the US military presence in the Philippines. We will never forget the terrible consequences of the US military presence. The US bases were used as a springboard of US surveillance and attack against the anti-dictatorship movement, including in counter-insurgency operations against the NPA in Central Luzon, prompting the NPAs to retaliate by organizing a number of punitive actions against US soldiers on the prowl in the bars and brothels in Angeles and Olongapo cities. We remember the terrible social consequences of these bases which exploited our people, prostituted women, along with our country’s national sovereignty.

However, under the Visiting Forces Agreement of 1999 a policy of reintroducing US troop presence by ‘stealth’ was put in place. The main focus of the VFA has been ‘counter-insurgency’ operations that are fuelled by the legitimate grievances of the Filipino people and the Bangsa Moro people. We suspect that the recent negotiations are aimed at bolstering the VFA. And despite the DFA claims that there will be no permanent US bases, we also understand that Subic is a fully-fledged basing facility that can be occupied at any time. Such plans can only be foiled to the extent that the people’s movement mobilizes and resists these manoeuvres.

No to US Military Presence in the Philippines! Scrap the VFA! China Must Stop the Bullying! For an Independent Foreign Policy! For a Non-Aligned ASEAN! 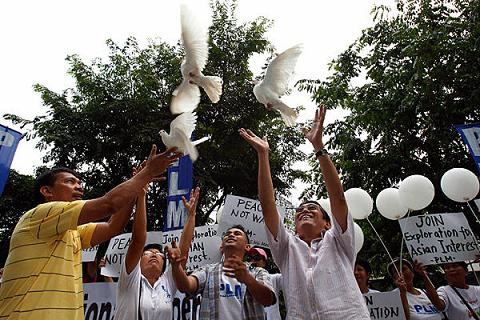