Locals and activists from Quit Coal stopped exploratory drilling in Bacchus Marsh today, 50km west of Melbourne. About 20 people occupied a drilling rig belonging to Mantle Mining on the side of Glenmore Road, near the corner of Daisybank Lane, Bacchus Marsh.

Two people locked themselves to the Mantle Mining exploratory drilling rig this morning: Paul Connor climbed to the top of the rig and unfurled a banner which read ‘No New Coal Bacchus Marsh’. Bacchus Marsh mother Natasha Mills, who is pregnant with her second child, locked herself to the bottom of the rig and told reporters "I felt a responsibility to stop drilling today because I’m determined to protect my family from a dangerous coal mine, and I don’t want my children’s future to be marked by run-away climate change."

"Other towns, like Wybong in NSW, have been destroyed by coal mining. Their Mayor apologised to the Wybong community last week for letting a coal mine be developed and reported the council felt a "great deal of shame" that they had let the mining companies in. The Bacchus Marsh community won’t let the same thing happen to us." she said.

The drilling rig was surrounded by people to stage a ‘picnic’, which featured locally grown produce. "We are eating locally grown food to illustrate what is at stake here" said Mills, "This project will destroy prime agricultural land, all for the sake of a quick buck and the burning of brown coal, one of the most environmentally harmful practices possible. Mantle’s project has so little support here among locals in Bacchus Marsh that our Mayor, our State MP and our Federal MP have all come out against it. It’s just wrong, and we’re not going to let it happen."

In September 2011 200 people gathered at the Shire Public Hall in Bacchus Marsh on Monday night to find out more about Mantle Mining's proposal to explore and mine for brown coal. The meeting was organised by the Moorabool Environment Group and while Mantle Mining had been invited to speak at the meeting, no representative attended. (Watch excerpts on Youtube | Listen to interviews with Moorabool Environment Group) Read a report of the meeting at the Ballarat Independent.

Another community meeting of 150 people in Bacchus Marsh was held in October 2011. (Watch excerpts on Youtube) Read a report of the meeting at the Ballarat Independent - Bacchus Marsh locks the gate to coal mining

At ther protest today Police attended but were initially unsure how to deal with people surrounding the drill rig on crown land next to the road. Paul Connor was eventually cut free by Police search and Rescue after 4 and a half hours on top of the rig.

Paul Connor told the media, "We need Victorians to join this fight alongside us till we win it. We can't ignore the urgent warnings from climate scientists about moving away from coal and develop a dirty brown coal export industry in Victoria."

The other protesters were not arrested, as the site is on public land and they did not break any laws. They choose to comply with a police order to move on after Connor was cut free from the rig.

The company Mantle Mining is aiming to develop a 1 billion tonne open cut coal export mine in Bacchus Marsh. This will result in the destruction of native grasslands and agricultural land used for market gardens to supply the Melbourne market, including organic certified growers who risk losing their certification if the project goes ahead.

Mantle Mining stated in a report (PDF) to the Australian Stock Exchange (ASX) on 19th November 2011 "Mantle Mining is currently carrying out a two-stage exploration drilling program its Bacchus Marsh coal project and has completed the first 4 holes of a 15 hole drill program. The Bacchus Marsh project contains an Exploration Target of 1-2 billion tonnes of brown coal." 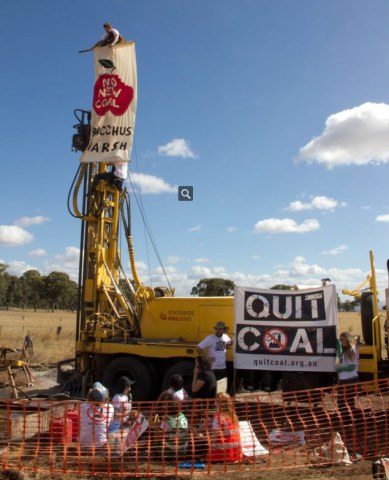 Re: No coal mine in Bacchus Marsh - locals and activists ...

We are suppose to be using coal to establish renewable energy systems, this is what climate change is all about.