About 400 people gathered in the sun, on the steps of the Victorian parliament for a weekday lunchtime protest to say no new coal fired power stations. The Rally was against the propoed HRL coal fired power station for Victoria. Speakers included Adam Bandt, Greens MP for Melbourne, Kelvin Thomson, Labor MP for Wills, Victoria McKenzie-McHarg, Safe Climate Campaigner for Environment Victoria, Greenpeace Energy Campaigner Julien Vincent, and Gem from AYCC.

Kelvin Thomson announced he would table a 13,000 signature petition in federal parliament next week calling on the Federal Government to withdraw the $100 million HRL grant and use that money to support renewable energy instead. Funding was made by the Howard Government in 2007 subject to meeting project milestones which the company has failed to meet.

Rally organisers said that it should be a straightforward decision for Minister Martin Ferguson to withdraw the grant given that HRL had consistently missed its deadlines. Victoria McKenzie-McHarg, Safe Climate Campaigner for Environment Victoria said today in a media release:

"In August 2011 Minister Ferguson withdrew $28 million from geothermal companies for not meeting their grant conditions. We would expect that HRL will lose their $100 million Howard era grant as well. The money should be re-directed to non-polluting renewable energy projects instead."

In the same media release Quit Coal spokesperson Shaun Murray said: "At the 2010 Federal Election the Gillard Government committed that no new dirty coal-fired power stations would ever be built again in Australia. If this power station goes ahead, they will break a key election promise. This is a crucial opportunity for the Gillard Government to prove their climate credibility and deliver their Clean Energy Future by saying yes to renewable energy, and no to dirty new coal like HRL.”

Electricity demand in Victoria has been stable for 5 years, bucking the historical trend and growth forecasts according to Greg Barber, who provided this graph and said "Victoria's demand for electricity hasn't grown in the last five years. And so far, in the first six months of this financial year, electricity use is down just slightly on the previous comparable period. There's been a lot of solar installed and a considerable push to use electricity more efficiently. Put that together with the rocketing price of power and some such as RMIT lecturer Alan Pears [in this article from August 2011 - Powering down – has Australian electricity consumption hit its peak?] think this could be a permanent state of affairs. So why the push for new coal fired power?" 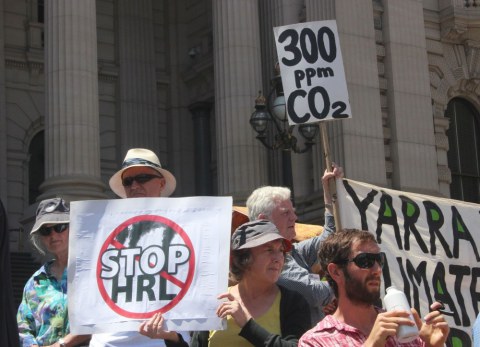 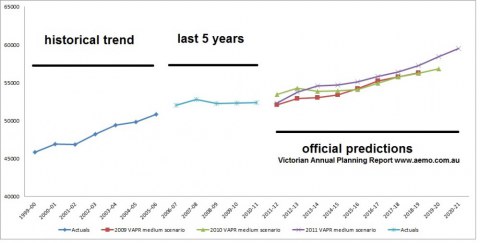