Scientists meeting at the University of Copenhagen have warned that biodiversity is declining rapidly throughout the world, describing the loss of species as the 6th mass extinction event on the earth. The world is losing species at a rate that is 100 to 1000 times faster than the natural extinction rate, with the challenges of conserving the world's species larger than mitigating the negative effects of global climate change.

The scientists and policymakers met last week in Copenhagen to discuss how to organise the future UN Intergovernmental Panel for Biodiversity and Ecosystem Services (IPBES) - an equivalent to the UN panel on climate change (IPCC). The conference was arranged and hosted in cooperation with the Danish Ministry of Environment and took place at the University of Copenhagen, where more than 100 scientists and decision makers, primarily from EU countries were gathered.

The conference concluded that dealing with the biodiversity crisis requires political will and needs to be based on a solid scientific knowledge for action to be taken to ensure a safe future for the planet. It is estimated that about 30,000 species go extinct each year, some three species per hour. This is not a new crisis. The World Conservation Union in 2004 reported on the Escalating global species extinction crisis.

Five previous mass extinctions have occurred in the planet's history, the last time being 65 million years ago - the end of the age of dinosaurs. These previous extinction events were driven by global changes in climate and in atmospheric chemistry, impacts by asteroids and volcanism. The present event, the 6th mass extinction, is driven by a competition for resources between one species on the planet – humans – and all others. Accelerating habitat degredation and loss is the primary process. The process is worsened by the ongoing human-induced climate change which particularly impacts fragmented ecosystems. 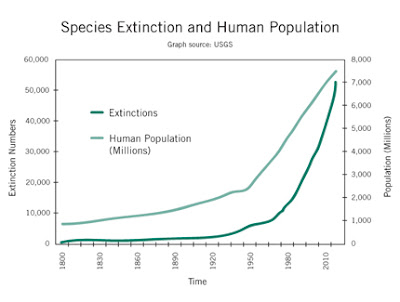 Human population is basically overpopulating the planet and driving species to extinction through destruction of native habitat and landuse conversion to industrial scale agriculture. Kevin J Gaston in a 2005 paper on Biodiversity and extinction: species and people (PDF) detailed that "The most important agent of change in the spatial patterns of much of biodiversity at present is ultimately the size, growth and resource demands of the human population...giving rise to levels of global species extinction largely unprecedented outside periods of mass extinction."

Researchers have found that bird species most at risk are predominantly narrow-ranged and endemic to the tropics, where species have small ranges and are imperiled by human land use conversions. Most of these species are currently not recognized as imperiled. "Land conversion and climate change have already had significant impacts on biodiversity and associated ecosystem services. Using future land-cover projections from the recently completed Millennium Ecosystem Assessment, we found that 950–1,800 of the world's 8,750 species of land birds could be imperiled by climate change and land conversion by the year 2100." says the research paper on Projected Impacts of Climate and Land-Use Change on the Global Diversity of Birds published in PLoS Biology in June 2007.

Another recent multi-author study has found that preservation of plant biodiversity provides a crucial buffer to negative effects of climate change and desertification in drylands. This is important as Dryland ecosystems cover 41% of the land surface of the Earth and support 38% of the human population.

Scientists have recently calculated the velocity of climate change to be 27.3 km/decade on land, and 21.7 km/decade in the ocean. This rate of movement of thermal climate envelopes poses problems for species facing a high speed migration, or a difficult and abrupt adaptation or extinction. For terrestrial species this involves migration polewards or to a greater altitude. For species that live on the top of mountains, ecosystem islands in the sky, they face a grim future of adapting to a warmer environment or extinction as they compete with species moving up from lower altitudes. Species from the tropics with small ranges are particularly threatened.

Professor Carsten Rahbek, Director for the Center for Macroecology, Evolution and Climate, University of Copenhagen said "The biodiversity crisis – i.e. the rapid loss of species and the rapid degradation of ecosystems – is probably a greater threat than global climate change to the stability and prosperous future of mankind on Earth. There is a need for scientists, politicians and government authorities to closely collaborate if we are to solve this crisis. This makes the need to establish IPBES very urgent, which may happen at a UN meeting in Panama City in April."

A landmark study on biodiversity in the Oceania region in 2009 - Major Conservation Policy Issues for Biodiversity in Oceania - highlighted species extinction is a serious problem. Lead author Professor Richard Kingsford of the University of New South Wales said:

"Earth is experiencing its sixth great extinction event and the new report reveals that this threat is advancing on six major fronts,"

"Our region has the notorious distinction of having possibly the worst extinction record on earth," said Professor Kingsford. "This is predicted to continue without serious changes to the way we conserve our environments and dependent organisms.

"We have an amazing natural environment in our part of the world but so much of it is being destroyed before our eyes. Species are being threatened by habitat loss and degradation, invasive species, climate change, over-exploitation, pollution and wildlife disease."

The study identified ongoing threats in Oceania including:

"The burden on the environment is going to get worse unless we are a lot smarter about reducing our footprint on the planet or the human population," said Professor Kingsford.

"Unless we get this equation right, future generations will surely be paying more in terms of quality of life and the environment we live in. And our region will continue its terrible reputation of leading the world in the extinction of plants and animals," says Professor Kingsford.

Acting on a personal level

So, how can you help stop extinctions? The sixth extinction website, a website about the current biodiversity crisis, gives a list of small but concrete measures you can take on a personal level.

I would add to this list to reduce your carbon foootprint through reduced consumption, minimise car use and replace with public transport walking and cycling, and encouragement of reuse and recycling.

Establishment of the UN Intergovernmental Panel for Biodiversity and Ecosystem Services (IPBES) joins the Convention on Biodiversity which came into force on 29 December 1993, and the UN Environment Programme on Biodiversity in tackling the biodiversity crisis on a global level.

"This is a critical pivotal moment in history. I can feel it every day. It's almost like a pressure cooker. Things are shifting and changing. We're either going to wake up or die. We don't know which one it is going to be." - Melissa K Nelson, Professor of American Indian Studies, San Fransisco State University from the trailer for the film Call of Life: Facing the Mass Extinction. The film is available as a multipart video on this blog - you can also watch the first part here on Youtube. 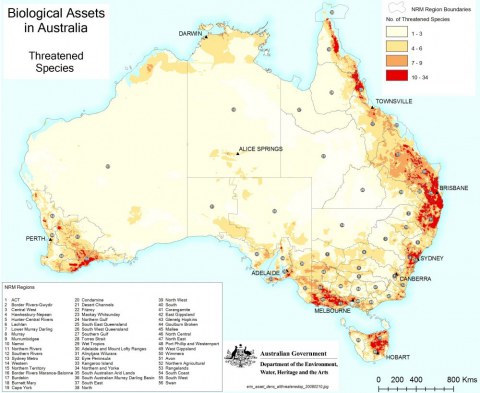 above it states -
•In Australia agriculture has modified or destroyed about 50 percent of woodland and forest ecosystems, and about 70 percent of remaining forests are ecologically degraded from logging.

However from my memory, reports evan 20 years ago stated that the continent of Australia had lost 90+ % of its forests, so today it would be evan worse.

no wonder they changed the anthem to " i love a sunburnt country ...." , not too many shady trees left to block out the sun and clean the air.

no problem for those who live and work in air conditioned buildings, drive in a/c autos and can afford the power bill but shock horror when the power goes down.

no need to travel to mars either, when creating desert landscapes seems to be easier to do here.

compare this land to papua or new guinea and you can clearly see the mental-ity of those who have caused this, but hey they probably own a villa or two on some pristine island where they can escape the sweating , suffering masses.