One of the last tragic extreme weather events of 2011 was Cyclone Thane hitting the Tamil Nadu coast of India. It caused 46 deaths and damaged buildings, roads and crops. It was the strongest tropical cyclone of 2011 within the North Indian Ocean.

From the Bay of Bengal it made landfall as a very severe cyclone on Friday 30 December very close to Puducherry. The storm struck with torrential rains and gale force winds from 125 to 140 kilometres per hour which uprooted hundreds of trees and knocked down electric poles and mobile phone towers producing power outages and communications blackouts in several areas.

There was an associated storm surge of 1.5 metres which flooded low lying coastal areas causing extensive damage to standing paddy crops in hundreds of acres in the coastal districts of Cuddalore, Villupuram, Nagapattinam and Thanjavur. There was also extensive damage to small fishing boats. Some people who refused to go to relief centres and stayed in low lying villages found themselves marooned.

Despite storm warnings in effect with twenty thousand people using relief shelters, there are reports of 46 deaths. The worst hit area was Cuddalore, south of Chennai with 39 deaths with a further 7 deaths in Puducherry. Some of the deaths were from collapsing walls and electrocution.

Roads in the region have been closed by uprooted trees and train services have been disrupted. The Tamil Nadu government declared a holiday for educational institutions in 11 districts.

Chief Minister for Puducherry N Rangasamy said the cyclone is the severest in recent history of Puducherry.

There are two nuclear plants producing power on the Kalpakkam coast, and while both used operating procedures for cyclone emergency conditions, neither stopped operating and were reported to be safe and undamaged. 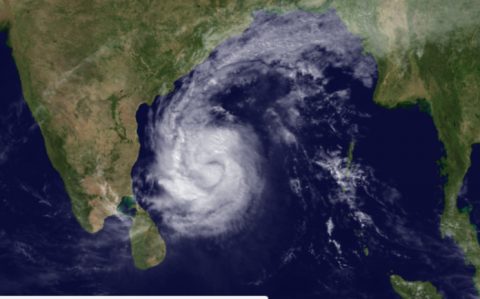 "A recent study linked increasing air pollution over the Indian sub-continent to an increase in the intensity of Tropical cyclones in the region, Takver was this study Peer Reviewed" ? if not it might just be another storm like all the other storms that have happened in the past hundreds of years,now every time there is a storm the Climate Alarmists like Takver will come out with their usual crap that man is the cause.The worst storm to hit India was a cyclone in November 25, 1839 where 300,000 people died, was this global warming or pollution that caused this? or how about the 1737 Calcutta Cyclone,December 1789 Indian Cyclone,1831 Orissa cyclone,November 1839 Coringa cyclone,Bengal cyclone of October 1847,1864 Calcutta Cyclone,November 1867 Great Calcutta cyclone,October 1874 Bengal cyclone,October 1876 Backergunge cyclone,
June 1885 Aden cyclone,1885 Orissa cyclone,June 1890 Muscat cyclone,1895 Orissa cyclone,1895 Balochistan cyclone,May 1902 Karachi cyclone,June 1907 Karachi cyclone,October 1942 Bengal cyclone,July 1944 Karachi cyclone,November 1946 Andhra coast cyclone,1948 Balochistan cyclone,May 1959 Salalah cyclone.

You see Takver India has a long coastline of 5700 km, which is exposed to tropical cyclones arising in the Bay of Bengal and the Arabian Sea. The Indian Ocean is one of the six major cyclone-prone regions of the world. In India, cyclones occur usually between April and May and also between October and December. The eastern coastline is more prone to cyclones as it is hit by about 80% of the total cyclones generated in the region.
Takver why do you twist the story to make out man or Climate change has something to do with it when we all know this is normal for this part of the world you must think people are stupid if you want them to believe the garbage you write.

Jimbo it is refreshing to read some one that makes sense no matter how many peer reviewed studies there are the fact remains that India has been prone to cyclones for centenaries and always will be, there is nothing new here I love how Takver makes out the Cyclones are extreme to the region, nothing extreme here!I laugh at the global warming alarmist when they try to paint a picture that this is new.
What next? Floods in china or Blizzards in America will be made look like a new thing or a extreme event because of man.
Good work Jimbo we need people like you to keep things in prospective and the Alarmists honest

The linked article is based on 4 recent peer reviewed studies

Jimbo,
please read the sources at the link. The linked article is based on 4 recent peer reviewed studies.
http://takvera.blogspot.com/2012/01/cyclone-intensity-in-north-indian-oc...

A comprehensive review of the world's best, recently published peer reviewed research, by scientist Jonathon Nott, determined the Al Gore/IPCC's Climategate science speculation that global warming would cause an increase of catastrophic hurricanes and cyclones is not supported by any empirical evidence. Ergo, the green alarmist prediction of increased CO2 emissions causing more hurricanes from global warming is baseless.

The frequency of tropical cyclones is not the point

ummm, that is a straw man argument irrelevant to this article. Most recent research has found that the frequency of tropical cyclones/typhoons will remain about the same or potentially slightly decrease, with some variability from one ocean basin to another.

However, the frequency of Tropical cyclones is not the point in the linked article. It is about an observed recent increase in intensity of cyclones in the North Indian Ocean basin, not an increase in frequency. Read that title again.
http://takvera.blogspot.com/2012/01/cyclone-intensity-in-north-indian-oc...

To read more on changes to cyclone intensity, especially for the Australian region, I suggest you read my recent article:
Stronger but fewer cyclones for Australia says CSIRO scientist which sources information from Knutson et al, and Kuleshov et al, the two more recent papers referenced by Nott.

Re: The frequency of tropical cyclones is not the point

Takver good to see you agree the IPCC got it wrong and the frequency of Tropical cyclones did not increase.what you got to get your head around is that there is no recent increase in intensity have a look at the storms that hit in the 1800's, your sound like a smart person use your brain

Looks like cyclones were in this area well before black carbon and other aerosols were around.So why would you blame black carbon and other aerosols for this normal weather pattern that has been recorded for Hundreds of years in this region a blind man can see global warming has nothing to do with this normal weather pattern are you really that desperate to keep you man made climate change hoax alive to try and use monsoon season in India as a example?

The next question is why is there so much emphasis put on Peer Reviewed Study?Considering so much Peer Reviewed study has got it wrong in the past.The reason may be every time you submit a paper, they ask you for a preferred list of reviewers and ask you who you would like to exclude how is this objective? This is the process of most peer review journals.In some cases the reviews are not even scientists.In order to be published you just have to have three to five people who have the knowledge and skills to assess your argument that your argument is worth considering. You don't have to convince them that you are right.The whole peer review process is nothing short of a joke used to push a agenda like man made global warming or is that climate change now? because the earth has not warmed since 1998.

Takver keep up the good work

Takver keep up the good work