In a landmark judgement concerning climate change, a judge in the NSW Land and Environment Court has given approval for the expansion of the Xstrata Ulan coal mine near Mudgee in Central western New South Wales, but conditional on the mine offsetting all of its greenhouse gas emissions generated in mining the coal.

The Hunter Environmental Lobby brought an appeal against the $1.2 Billion Ulan West project based upon it's long term impact of exacerbating global anthropogenic climate change, as well as damage to groundwater systems and clearing of critically endangered vegetation communities. The mine expansion proposal includes a 239 hectare open cut mine and approximately 25 square kilometres of additional longwall mining. The environment group were represented by The Environment Defenders Office.

In delivering her judgement on the landmark case on Thursday 24 November, Justice Nicola Pain invited the NSW Minister for Planning, Ulan Coal and Hunter Environment Lobby to come to agreement on several environment conditions in the Ulan West project. The Nature Conservation Council of NSW has welcomed the decision saying that this is a landmark legal precedent for coal mines required to offset greenhouse pollution.

The security of Long term biodiversity offset areas have been negotiated with an amended condition 43 (Para 186): "the Proponent shall make suitable arrangements to provide appropriate long term security for the Bobadeen Vegetation Offset Area, the Bobadeen East Offset Area, the Brokenback Conservation Area, the stand of Acacia ausfeldii along the eastern side of Highett Road, and the Spring Gully Cliffline Management Area to the satisfaction of the Director-General."

New conditions were agreed to relating to Baseflow Offsets and a Water Management Plan. Condition 29 states "The Proponent shall offset the loss of any baseflow to the Goulburn and Talbragar Rivers caused by the project to the satisfaction of the Director-General. However, this condition does not apply if the Director-General determines that the loss of baseflow is negligible."

Justice Pain said that the condition was not warranted "given the general nature of the concerns raised by the Applicant and the absence of any clear information that remediation is now or may become practical and feasible." (Para 166)

I am aware of only one other merit appeal concerning a coal mine under Pt 3A, also heard this year, being Ironstone. The impact of GHG emissions was not raised in that appeal. This is therefore the first time the Court has had to consider the environmental issues raised by the GHG impacts of a large coal mine in a merit review process. The orthodox approach applied generally in all areas of environmental impact assessment is that any adverse impact must be avoided where feasible and practical to do so. Where harm is unavoidable other measures should be considered to ameliorate the impact, one of which can be offsetting measures. As acknowledged by Mr Kitto there is nothing inherent in an offset scheme for GHG which prevents such an approach.

Further, in para 100 she elaborates:

In the context of this application, the condition would be imposed on an approval that extends the life of this coal mine for 10 years and permits extraction of substantial additional coal each year of that extended period. The offsetting relates directly to the additional emissions generated over that time. That this is the first such condition imposed on a coal mine in NSW is not necessarily discriminatory, it is simply the first occasion that has occurred. I have found that it is otherwise lawful. Condition 18B does not require the offsetting of all GHG emissions just those which are emitted above the GHG budget identified in the EA. I consider it can be implemented reasonably (subject to clarification of the approach in some of the conditions referred to below). As other operating coal mines seek approval to modify or extend their operations, or new coal mines are opened, it would be open to the consent authority which may be the Minister to impose a similar condition.

"As Australia begins its transition towards a low‐carbon economy, it's fitting the Land and Environment Court has for the first time recognised that coal mines should take responsibility for the millions of tonnes of greenhouse gas pollution they produce each year.

"The precedent set by requiring Xstrata to offset the production and transport emissions from its Ulan coal mine puts the fossil fuel industry firmly on notice. Coal mining activities have a significant impact on the health of our community and environment, and the era of ‘free’ pollution is over.

"The Ulan mine expansion will need to offset 23.5 million tonnes of greenhouse emissions each year, increasing NSW’s contribution to global emissions by 0.8% per year.

"But we mustn’t forget that Ulan is not the only coal mine project in the planning pipeline.

"As other operating coal mines seek to expand or modify operations, we call on all state governments to ensure strict offset arrangements become standard approval conditions so operators pay their fair share for mitigating the impact of their carbon pollution.

"Offsets for climate change impacts from coal mines are a significant reform, but it is only a first step towards our ambition of a clean energy economy for the future," Mr Clarke said.

There is also a Legal challenge against new Xstrata coal mine at Wandoan being brought by Friends of the Earth Brisbane. Read related documents on this case at Environmental Law Publishing 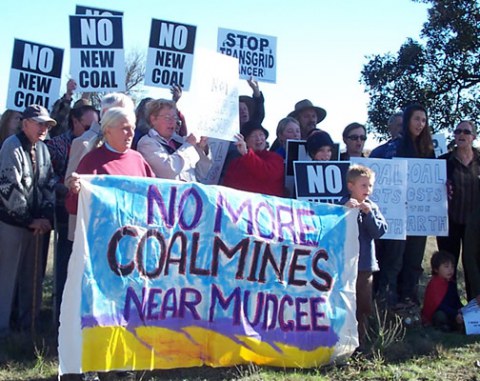 We don't need coal, most societies of the world don't have coal

We don't need coal, most societies of the world don't have coal
Anthony

We don't need electricity a lot of societies of the world don't have electricity.