Protests in Australia occurred to mark ten years of Australia’s involvement in the brutal U.S. led occupation of Afghanistan which began on October 7th 2001. Despite overwhelming opposition to the war, the response of the Australian peace movement was small. The largest demonstration was in Sydney wherer the Sydney Stop The War Coalition and Stand Fast held a rally and march. See video. In Melbourne, a small protest occurred in the city square and a St Pauls Cathedral. Some direct action did occure when five Christian activists in Brisbane were arrested as part of group of 25 people protesting outside Enoggera army Base. Enoggera Army base is a major staging point for troops departing for the Afghan war.

Australian’s were also active in peace protests in Britain. Ciaron O’Reilly was part of a group arrested for blockading Downing St. Whilst Julian Assange, spoke at a peace rally about the complicitness of our media in war crimes stating "War by media.. Let us ask ourselves what is the average death count attributed to each journalist?". John Pilger also spoke powerfully on the role of media and war stating "For such journalists there are two types of humanity in war.. there are worthy victims and unworthy victims.." Of course these speeches were ignored by the Australian press!.

U.S. President Obama is visiting Australia on the 16th-17th of November to mark the 60th Anniversary of the ANZUS treaty. It is the security relationship with the U.S. that keeps Australia enslaved to the interests of the U.S. empire and the reason we keep killing people in wars such as Korea, Vietnam, Iraq and Afghanistan. It will be interesting to see if the Australian peace movement can organise around this visit. 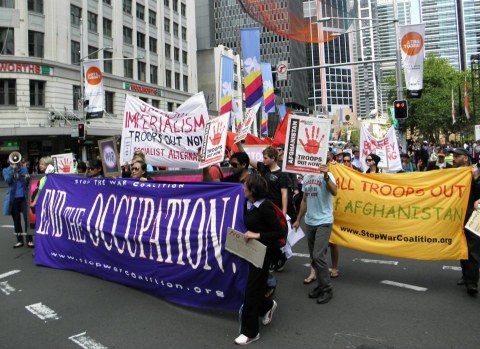