Do you fancy a bit of chocolate every now and then? Perhaps a hot cup of drinking chocolate and milk before going to bed? or a few small pieces of a bar of chocolate while watching TV? Maybe a fancy imported Swiss or Belgium chocolate with coffee and liquers at the end of a dinner party? or maybe some cool chocolate icecream on a hot summer's day? This could all become a thing of the past as chocolate becomes an extreme luxury item due to global warming.

Most western people have a bit of a sweet tooth and enjoy the pleasure of indulging in chocolate, either in small amounts, or sometimes less moderate binges. For dentists it provides a continuing customer base. I admit it, I am partial to the odd bit of chocolate. So I am dismayed with the latest reports that climate change will decimate cocoa farming and chocolate production with the decline noticeable as soon as 2030 with a major impact by 2050. The price of chocolate is also escalating as western taste for this luscious indulgence spreads to more people in developing countries.

Chocolate and the Cocoa Bean

Chocolate is derived from the Cocoa bean plant grown in tropical locations with more than half being produced from Ghana and the Côte d’Ivoire in tropical Africa. For many tropical third world and developing countries in Africa and Latin America it provides many small scale and subsistence families with a much needed cash income to help them out of a cycle of intense poverty, and needed export income for these countries to increase the social living standards.

According to the Fair Trade Network "More than 30 developing countries produce cocoa, supporting more than 14 million people. In some countries of West Africa and Latin America, cocoa production is the primary income stream. In the Ivory Coast and Ghana, 90% of the farmers rely on cocoa for their primary income. Around the world, 90% of cocoa is grown and harvested on small family farms of 4.8 hectares or less, while just 5% comes from plantations of 40 hectares or more."

Commercial Cocoa production has also often minimised costs through exploitation of child labour under child slavery conditions. A good reason to support Fair Trade efforts which imposes minimum standards of 'No forced labour of any kind, including child labour.' 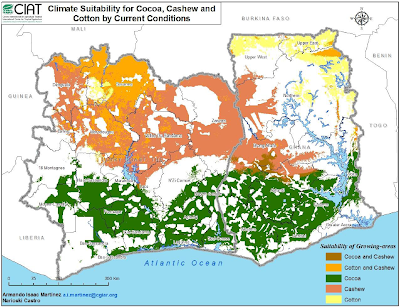 Climate suitability for Cocoa, cashew and cotton under current conditions

A report for the Cocoa Research Institute of Ghana produced under the Netherlands Climate Assistance Programme - Vulnerability of agriculture to climate change - impact of climate change on cocoa production (PDF) - found that:

"Cocoa is highly sensitive to changes in climate- from hours of sun, to rainfall and application of water, soil conditions and particularly to temperature due to effects on evapo-transpiration. Climate change could also alter stages and rates of development of cocoa pests and pathogens, modify host resistance and result in changes in the physiology of host-pathogen/pests interaction. The most likely consequences are shifts in the geographical distribution of host and pathogen/pests, altered crop yields and crop loses which, will impact socio-economic variables such as farm income, livelihood and farm-level decision making."

Women in Ghana, indeed in many develeping countries, will particularly feel the effects of climate change being more dependent on subsistence agriculture.

"Climate change will systematically affect women due to their reliance on subsistence farming activities. These changes will affect soil conditions and therefore would have adverse impact on food production. Women’s income from their livelihoods and other economic activities will become critical thus making them poorer. This reinforces the importance of the environment and particularly climate change in women’s lives." advises a report on Womens’ Livelihoods and Vulnerability to Climate Change (PDF) by the Netherlands Climate Assistance Programme.

A Nigerian study published in the Journal of Sustainable Development in Africa (Volume 12, No.1, 2010) titled Effect of Climate Change on Cocoa Yield: a case of Cocoa Research Institute (CRIN) farm, Oluyole local government Ibadan state (Download PDF) describes Cocoa as beng very susceptible to extreme weather conditions with temperature and rainfall being important factors that impacts on optimum yield. With the incidence of extreme weather increasing due to global warming, Cocoa production is likely to be hit hard.

The study says that:

"Cocoa is highly sensitive to changes in climate, particularly to temperature due to its effects on evapo-transpiration (Anim-Kwapong and Frimpong, 2005). Weather elements can also alter stages and rate of development of cocoa, pests and pathogen modify host resistance and result in changes in the physiology of host pathogens/pest interaction, the most likely consequences are shift in the geographical distribution of host and pathogens/pests altered crop (cocoa) yield and crop losses which, will impact on socio-economic variables such as farm income, livelihood and farm level decision making."

A more recent report released in September 2011 by the International Center for Tropical Agriculture reckons that it is getting Too hot for chocolate? - Predicting the Impact of Climate Change on the Cocoa-Growing Regions in Ghana and Cote d’Ivoire (PDF).

The scientific report warns that warmer conditions mean the heat-sensitive cocoa trees will struggle to get enough water during the growing season, curtailing the development of cocoa pods, containing the prized cocoa bean – the key ingredient in chocolate production. The trees are also expected to struggle as the region’s dry season becomes increasingly intense.

It predicts that by 2050, a rise of 2.3 degrees Celsius will drastically affect production in lowland regions, including the major cocoa-producing areas of Moyen-Comoe, Sud-Comoe and Agneby in Cote d’Ivoire, and Western and Brong Ahafo in Ghana. Farmers in these areas are particularly vulnerable since cocoa production is often their primary source of income.

"Many of these farmers use their cocoa trees like ATM machines,” said CIAT’s Dr. Peter Laderach, the report’s lead author. “They pick some pods and sell them to quickly raise cash for school fees or medical expenses. The trees play an absolutely critical role in rural life."

"Already we’re seeing the effects of rising temperatures on cocoa crops currently produced in marginal areas, and with climate change these areas are certain to spread. At a time when global demand for chocolate is rising fast, particularly in China, there is already upward pressure on prices. It’s not inconceivable that this, combined with the impact of climate change, could cause chocolate prices to increase sharply." warned Peter Laderach.

Off course as lowland areas warm growers will attempt to move production to higher altitudes to compensate for higher temperatures caused by global warming. "The problem is that much of West Africa is relatively flat and there is no ‘uphill’. This is a major cause of the potentially drastic decreases in cocoa suitability in the region,” continued Laderach.

In moving cocoa production to higher ground, where it is available, is likely to result in forest clearing including pressure to use protected areas that are important habitats for flora and fauna, the report warns. These areas are likely to provide important biodiversity refugia for fauna and flora trying also to adapt to a warming climate. "For these reasons it is essential that we focus on increasing the resilience of existing production systems as much as possible." concluded Peter Laderach in a media statement (PDF)

The research on the impacts of climate change on cocoa farming was funded by the Bill and Melinda Gates Foundation. While I minimise my use of the Microsoft Windows Operating System preferring the open source Ubuntu Linux Operating System, it seems we have something in common: we share the same concern regarding the future of chocolate. I might not agree with some of Mr Gates products and business practices but at least Mr Gates is putting some of his enormous wealth into scientific research on impacts of climate change and tackling possible adaptation strategies.

The International Center for Tropical Agriculture (CIAT) is also researching the impact of climate change on cashew and cotton growing regions in Ghana and Cote d’Ivoire. 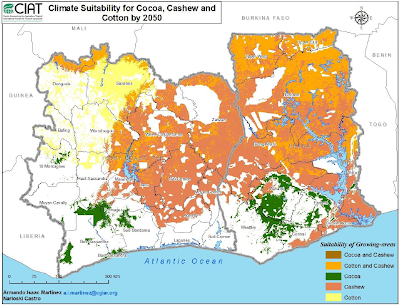 Projected Climate suitability for Cocoa, cashew and cotton by 2050

The effects on Cocoa farming are not isolated. Climate Change will mean big impacts on crop yields impacting on global and national food security, and necessitate major agricultural adaptations. In a 2010 scientific study published in Science on wheat and the mustard plant Arabidopsis at the University of California at Davis, scientists found that Rising atmospheric Carbon Dioxide levels threaten crop yields and food security. In a dangerous sting for agriculture, climate change has been implicated in bee decline, important for commercial crop pollination. Coffee and tea drinkers may also notice price increases and taste changes with Global warming a potent brew for coffee and tea drinkers. Even in developed countries like the United States climate is likely to severely damage crop yields.

But it is not only the longer climate trends of increasing temperatures and changing rainfall patterns that will effect commercial crops. Extreme weather events are becoming more frequent and intense as the planet's hydrosphere warms up and more water is carried in the atmosphere. This means stronger more intense storms like Cyclone Yasi that devastated the banana crop in Queensland early this year, or the twin typhoons that struck the Philippines at th end of September that killed at least 76 people and caused at least US$200 million in damage to infrastructure and agriculture, or global warming amplifying the worst Texas drought on record in the United States causing over US$5 billon in damages to the agricultural setor.

So the next time you indulge yourself with some chocolate, think about how your life will change when you can no longer afford to buy this little luxury. Think about the fear and doubt that climate deniers like South Australian Liberal Party Senator Cori Bernardi continues to spread through multiple websites and astro-turf groups according to this Age news article - Bernardi busy behind 'grassroots' anti-carbon tax movement. When next you read a column by climate skeptics Andrew Bolt or listen to Alan Jones, remember what their attacks on climate science has done to imperil action on climate change and the simple enjoyment of mouth-melting chocolate for the multitudes like you and I.

What can you do?

Think about supporting organic and local Fair Trade products as much as possible, which returns more income directly to the small producer under ethical standards of production and marketing.

Today, October 16, is World Food Day. I have chosen to explore the links between Cocoa farming, chocolate and climate change as my contribution for Blog Action Day. 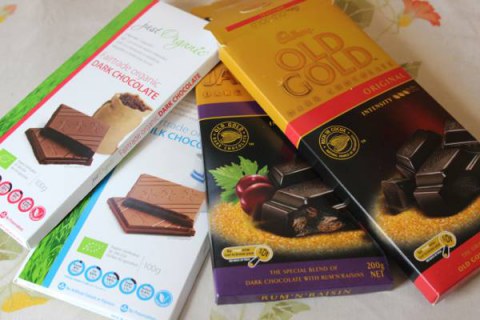 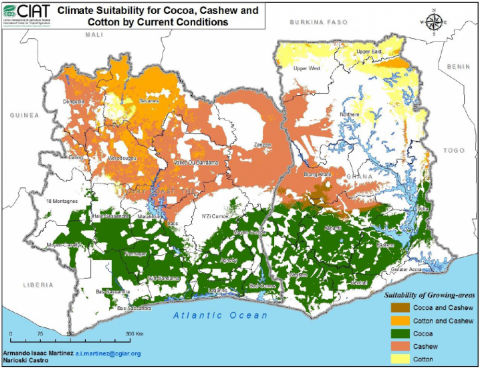 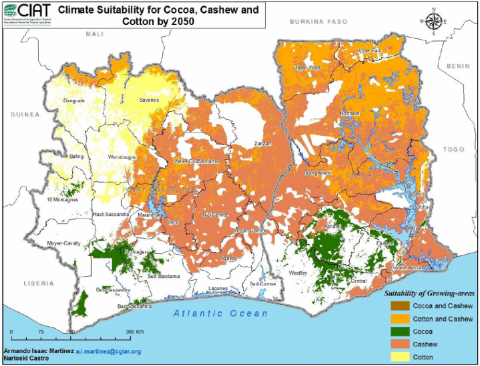