Five environmental activists were arrested yesterday for climbing the Opera House and draping a banner on one of the sails protesting Retailer Harvey Norman's participation in Australian native forest destruction. The banner read "No Harvey No! Stop selling Aussie forest destruction!" and was part of a global 24 hours of action targeting the Harvey Norman business with more than 30 actions taking place in Australia and several overseas.

Harvey Norman is Australia’s largest electronics and furniture retailer. A Markets for Change report released in July 2011 (Executive summary PDF) stated "As Australia’s largest retailer of furniture and electronics in Australia, Harvey Norman, its management and its shareholders have a special responsibility to source products in an environmentally responsible way. Markets for Change believes it is already possible for Australia to cease the use of native forest timber for furniture products and replace them with timber from plantations. Indeed, plantation-­‐sourced products are already available at some Harvey Norman outlets."

Australia's temperate climate native forests are some of the world's most carbon dense forests according to scientific research published in 2009. More recent research published in July 2011 shows that Forests play a major role as carbon sinks. Yet State Governments in New South Wales, Victoria, Tasmania and Western Australia continue allowing the destruction of native forests through logging concessions. Native hardwood forests are logged for pulp for toilet paper and paper manufacture, and timber for export to China to be turned into furniture, to be imported and sold by Harvey Norman and other retailers.

Ula Majewski, a spokesperson for The Last Stand, outlined the reasons for the protest from the Sydney Opera House. "Climbers have abseiled from the top of the Sydney Opera House to stand up for our iconic Aussie forests and say No Harvey No! Stop selling Aussie forest destruction! We have come to the centre of Sydney to send a clear message to Harvey Norman that profiting from the destruction of our spectacular forests is absolutely unacceptable"

"Our internationally iconic Aussie forests are still being destroyed by industrial logging operations. We are taking peaceful action from the top of another great Aussie icon to tell Harvey Norman that selling Aussie forest destruction is no way to do business" said Miranda Gibson, from atop one of the Opera House sails.

"The whole world is standing up for Australia’s native forests today and sending a very clear message to Harvey Norman that profiting from forest destruction is absolutely unacceptable in the 21st century. From Hollywood to Milano, hundreds of people are taking a stand to say No Harvey No! Stop selling Aussie forest destruction" said Ms Majewski.

A further two campaigners were arrested at Harvey Norman’s Preston store in Melbourne after occupying the roof and displaying a large banner. "We are here today to take a strong stand against the ongoing destruction of Australian forests", said The Last Stand spokesperson, Nicola Paris. “We are anticipating arrests as the activists occupying the roof are willing to make a stand against the ongoing devastation of our forests. This peaceful action is being taken to draw attention to the forest destruction, with it’s associated climate impacts and loss of animal habitat, that continues across Australia today, driven by Harvey Norman’s requirement for native forest furniture and flooring.”

"Victorian forests in the Central Highlands and Gippsland are destroyed every day, despite 90% of people recently polled stating they want to see an end to native forest logging." Nicola Paris stated. "With the current forestry industry in crisis we are calling on Harvey Norman to lead the way – they could make a smart business decision, show some envrionmental leadership and choose to transition to plantation and recycled timbers."

Overseas protests occurred at Washington DC and Los Angeles in the US, Ontario in Canada, Prague in Poland, Auckland in New Zealand, Milano in Italy, Gent in Belgium, Germany, Goteborg Sweden, India, and Bristol and Oxford in the United Kingdom.

"This campaign continues to grow, and we hope the strength of commitment shown by our activists today will serve to remind Harvey Norman that whilst they are still profiting for forest destruction, we will be here to remind their customers about it." said Nicola Paris.

Harvey Norman reputedly spends over $100 million a year on advertising it's brand. When Getup and Markets for Change produced a television ad in April 2011, the industry body that classifies ads for Commercial TV - Commercials Advice - refused to give it a classification "on the basis that it might expose free-to-air TV stations to legal action." The refused classification means it is essentially banned from commercial television airwaves according to a July 2011 report in the Sydney Morning Herald - Harvey rejects forestry claims.

You can visit Getup to watch the ad and sign an online petiton. 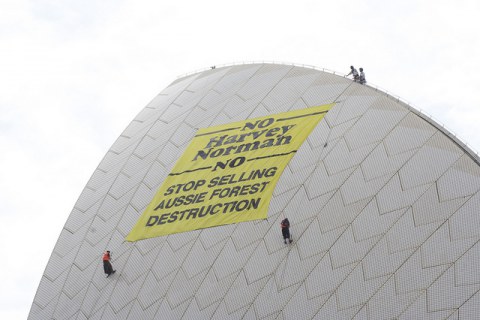 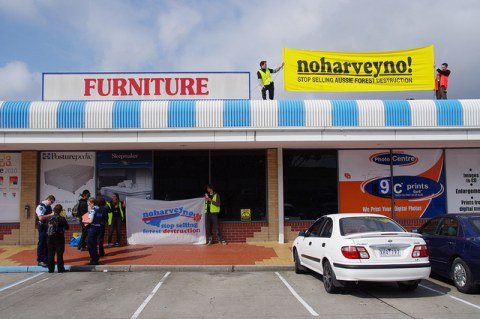