Average global sea level is rising at the fastest rate in 2000 years according to scientists, and north and western Australia is copping more than double the global average in sea level rise. The rate of increase has accelerated in the last 20 years which has been attributed by scientists to thermal expansion, small glacier melt and accelerating ice sheet loss from the Greenland and West Antarctic ice caps caused by climate change and global warming. A peer reviewed scientific study published in June 2011 from the Potsdam Institute for Climate Impact Research has shown the rate of Sea level rise is connected to global temperature rise.

According to the CSIRO (PDF) "From 1870 to 2007, the global average sea level rose by close to 200mm. Sea levels rose at an average of 1.7mm per year during the 20th century and about 3.0mm per year from 1993-2009. These levels are global averages and because of the differing movements of ocean currents around the globe, results vary from place to place. This is true for Australia where since 1993 levels have risen 7-10mm per year in the north and west, and 1.5-3mm in the south and east."

Sea levels change all the time with weather, climate, ocean currents and geological isostatic adjustment caused by melting of ice sheets and redistribution of their mass to the oceans. There are seasonal, interannual and interdecadal fluctuations, as well as fluctuations associated with events such as the El Niño Southern Oscillation (ENSO) cyclic weather pattern.

The recent strong La Niña pattern during late 2010 and into 2011 resulted in 10-20cm extra sea level anomaly at most sites across the northern and western half of the Australian mainland and as much as 25cm at Hillarys near Perth. "The positive sea level anomalies at Hillarys, Rosslyn Bay and Cape Ferguson during the 2010/11 La Niña were the highest since the stations were installed in the early 1990's and were a major reason why record-high monthly mean sea levels were observed at these stations." said the 2011 sea level report (PDF) from the National Tidal Centre, Australian Bureau of Meteorology.

The most serious impacts of sea levels will be caused by extreme events such as tsunamis and storm surges from tropical cyclones. In a warmer world the frequency and intensity of tropical cyclones and hurricanes will be increased thus contributing to greater storm surge capacity. (See 2005 report in Science: Changes in Tropical Cyclone Number, Duration, and Intensity in a Warming Environment)

The SEAFRAME stations detect tsunamis such as the magnitude 9 earthquake that struck Japan on 11 March 2011 producing a wave that was detected around Australia: Cape Ferguson (0.2m from trough to crest), Rosslyn Bay (0.4m), Port Kembla (0.6m), Spring Bay (0.6m), Burnie (0.2m) and Portland (0.2m). Evidence of the tsunami was also detected at Stony Point and Lorne SEAFRAME stations. Similarly cyclones produce storm surges which are measured. At Cape Ferguson the storm surge of Tropical Cyclone Yasi was measured at 2.0m on 2 February 2011.

Climate change is causing average global sea levels to rise due to a number of processes:

The transfer of mass as ice sheets to water in the ocean will result in variable rises in sea level for different regions due to the change in gravity. Change in Sea level around Greenland and northern continents may remain minimal or actually fall in certain areas, where as equatorial regions and the southern hemisphere may experience rises much greater than the average. Hans Joachim Schellnhuber, the director of the Potsdam Institute for climate impact research called this the injustice of sea level rise - where countries that have least contributed to the accumulated greenhouse gases which cause climate change and sea level rise will be most impacted.

Recent Sea Level trend based upon National Tidal Centre, Australian Bureau of Meteorology Seaframe data gauges installed 1990-1993 and measured to June 2011; and net sea level trend after vertical movements in the observing platform relative to a local land benchmark and the inverted barometric pressure effect are taken into account.

The IPCC 4th report in 2007 estimated sea level rise projections of 18 to 59cm by 2100, but with a caveat that not enough was known of the dynamic processes in ice sheet melting and it's contribution to sea levels. Much research into Ice sheet melting and disintegration has occurred since this report. A 2009 study by the Potsdam Institute for Climate Research Proceedings of the National Academy of Sciences of the United States of America warned that sea level could rise much faster than previously expected. By the year 2100, global sea level could rise between 75 and 190 centimetres.

Dr John Church, a specialist researcher in climate and sea level change from the CSIRO warned at an international scientific conference in Copenhagen prior to COP 15 that "Sea level is currently rising at a rate that is above any of the model projections of 18 to 59 cm". he said. "Our study centered on Australia showed that coastal flooding events that today we expect only once every hundred years will happen several times a year by 2100", said John Church.

A study published in June 2011 in the journal Proceedings of the National Academy of Sciences (PNAS), found that the Fastest Sea-Level Rise in 2,000 Years is Linked to Increasing Global Temperatures. The rate of sea level rise along the U.S. Atlantic coast is greater now than at any time in the past 2,000 years according to the study, and has shown a consistent link between changes in global mean surface temperature and sea level. The California coast has experienced sea level rise of nearly eight inches according to a 2009 study - The impacts of sea-level rise on the California Coast. Under medium to medium-high emissions scenarios, mean sea level along the California coast is projected to rise from 1.0 to 1.4 meters (m) by the year 2100.

The risks of sea level rise have been outlined in a book by Dr Peter Ward, a paleontologist and professor of Biology and of Earth and Space Sciences at the University of Washington, Seattle. The book, The Flooded Earth: Our Future In a World Without Ice Caps, warns that the single biggest threat and impact of climate change will be rising seas, rather than hot weather, or even drought. Ward explains why, how, and how fast the seas will rise, due to global warming.

Rising sea levels will have devestating consequences around Australia including: 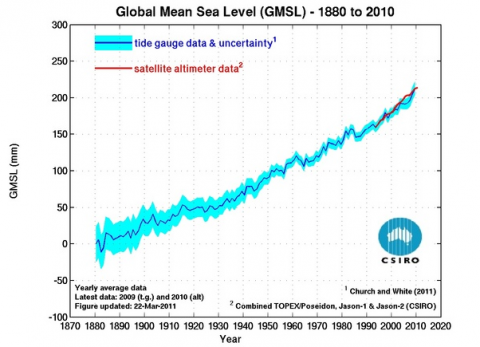 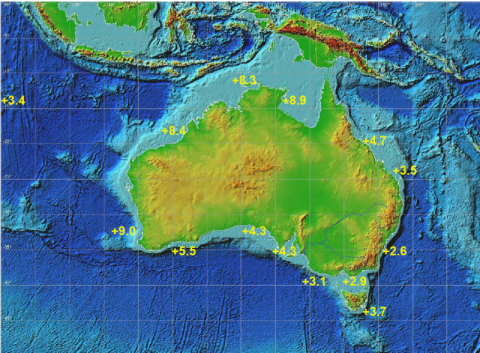 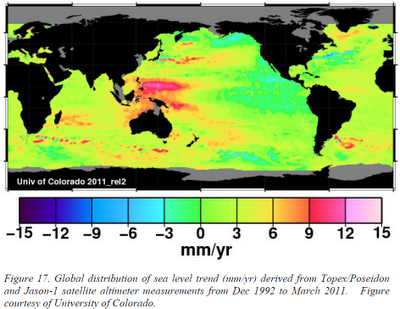 What was the rate of sea level rise from 1425 to 1870?You got no data right, may be it is a normal trend and sealevel rise is not man made or maybe Dr Nils-Axel Mörner is right and Dr John Church says what people want to here to keep his grants lets face it he has nowhere the experience that Dr Nils-Axel Mörner has and he does not need money from grants http://www.climatechangefacts.info/ClimateChangeDocuments/NilsAxelMorner...

Nothing to fear but fear itself.

Again, scientists stuck on IPCC models. Can't fix stupid. 150 years of climate research and now, we want to put it into law.

Again, Parliament stuck on stupid. They need some ICE AGE research to bring them up to speed.