The scandal engulfing Rupert Murdoch and his global media empire is giving the world a glimpse of what the face of power looks like today — and it’s ugly.

The revelations of networks of patronage and power, which link politicians and the police to corporate interests that believe themselves to be above laws, ethics or scrutiny, are frightening.

However, Murdoch’s reputation for deciding elections and dictating policies to governments, and the notorious right-wing bias (and looseness with inconvenient facts) of his media outlets, is not new.

Murdoch turned the Australian media empire he inherited from his father, Sir Keith Murdoch, into a global machine for disseminating propaganda and making bucket-loads of money in the process.

That appeals to sleazy voyeurism and aggressive prejudice have been central to his success is also not a new revelation.

The first revelations of the News of the World being involved in illegal phone tapping and corruption concerned invasions of the privacy of celebrities and royalty.

There was public disquiet, one arrest and a couple of resignations, and the paper’s image was damaged, but it did not create a major scandal.

However, when it was revealed that teenage murder victims and their families, families of terrorist attack victims and families of soldiers killed in overseas wars had all had their phones tapped, public anger exploded.

Parliamentary enquiries were called, police made arrests and Murdoch closed the NOTW down.

He also withdrew his takeover bid for satellite TV station BSkyB, and began accepting the resignations of increasingly senior executives.

On July 16, the BBC reported: “UK national newspapers are running a full-page advert with a signed apology from Rupert Murdoch.”

Politicians who once were on intimate terms with the Murdoch family and senior executives are steadily distancing themselves from him.

Some have begun speaking about their own victimisation by Murdoch — such as former Labour PM Gordon Brown, whose family’s medical records were illegally obtained and reported.

One of the parliamentary enquiries will investigate why earlier police investigations failed to reveal the extent of NOTW's illegal activities. These activities included bribing police to get inside information on criminal investigations.

The attacks on teenage murder victims and their families caused the most revulsion. Not only was this victimisation of already traumatised people breathtaking in its sheer bastardry, it underlined the hypocrisy of the Murdoch media.

The Murdoch tabloids’ trademark sensationalist coverage of crime, and accompanying campaigns for draconian law-and-order politics such as harsher sentences and more police powers, has always been in the framework of self-righteous claims to be the voice of victims.

Another trademark of the Murdoch media globally is Islamophobia. From Fox news’ hysterical reaction to President Barack Obama’s Arabic middle name, to the Sydney Daily Telegraph’s current anti-Burka campaign, the Murdoch media has consistently vilified Muslims in the name of protecting Western society from terrorism.

In Australia, not only has Murdoch used his media to campaign for anti-terror laws but, in several cases after such laws have been introduced, authorities used the Murdoch media during prosecutions to spread allegations against defendants in terrorism trials.

Such allegations cannot be refuted in open court, or spoken about by the accused, because of secrecy provisions in the anti-terror laws.

At an August 6, 2009 press conference, Paul Whittaker, editor of The Australian, revealed that the Australian Federal Police tipped them off a week in advance of an arrest that took place on August 4, and they “agreed to sit on the story”.

Like other arrests under anti-terror laws, the arrest was staged in front of cameras.

Civil liberties lawyer Rob Stary, who defended the case, told the August 12, 2009, Green Left Weekly: “One of the things we are concerned with is the sophisticated and calculated [attempt] to pollute public perception by deliberately leaking material through the media.”

The phone tapping revelations show that the Murdoch media’s concern for those affected by terrorism is as hollow as its concern for murdered high school students and their families.

The targeting of terror attack victims has meant that the Murdoch empire may be investigated in the US as well as Britain.

Bloomberg Businessweek reported on July 15: “Representative Peter King, the Republican chairman of the House Committee on Homeland Security, asked FBI Director Robert Mueller in a July 13 letter to investigate whether News of the World employees tried to access voice mails belonging to victims of the 2001 terrorist attacks through bribery and illegal wiretapping …

“[US Attorney General Eric] Holder today confirmed the existence of a US probe in public comments he made while in Sydney.”

The revelations that the NOTW bugged the phones of families of British soldiers killed in Iraq and Afghanistan shows the same pattern of total violation of the rights of people that paper claimed to be crusading on behalf of.

In Britain, the US and Australia, moral blackmail about the soldiers whose lives were sacrificed is used to mute criticism of the unpopular wars. The Murdoch media leads the way.

That the unpopularity of these wars of occupation has grown in the English-speaking countries waging them is another indication that Murdoch’s ability to manipulate the “ignorant” masses may not be as great as he’d like those who run for elected office to believe.

His global media empire has consistently devoted its resources to promoting support for the wars and played a large role in manufacturing the pretexts, such as Saddam Hussein’s non-existent weapons of mass destruction and links to Al Qaeda and the 9-11 attacks.

Thefirstpost.co.uk said on July 15: “More than two years before the publication of the government's dodgy dossier on Iraq's non-existent WMD, News International papers were already doing their best to convince the public of the dire threat from Saddam Hussein.”

“On Christmas Eve 2000, the Sunday Times published a story headlined ‘Saddam builds new atom bomb’ in which it was claimed that the Iraqi leader ‘has ordered his scientists to resume work on a programme aimed at making a nuclear bomb’.

“As war drums were being beaten louder, the pro-war propaganda became ever more outrageous.

“Just a few days before the war began, the Times ran an article by the pro-war Labour MP Ann Clwyd which claimed that Saddam used a people-shredder to dispose of his enemies.

“‘See men shredded, then say you don’t back war,’ was the article’s provocative headline.”

A characteristic of Murdoch’s pro-war propaganda has been aggressive vilification not only of the “enemies” the wars are against but of any voices opposing, or even questioning, the wars.

His US TV network Fox News is notorious for outlandish conspiracy theories and no-holds-barred abuse passed off as political commentary, outdoing even the Sun.

Fox News played a significant role in creating the far-right wing “Tea Party Movement” that has been gaining influence over the US Republican Party.

In Australia, where Murdoch owns two-thirds of major metropolitan dailies, and substantial interests in suburban, regional and rural newspapers and free-to-air and pay TV, Greens Senator Bob Brown called for a Senate enquiry into the media.

“The fact is that we do have less choice in Australia when you go to buy a newspaper, in fact you can’t avoid Murdoch-owned newspapers in a number of Australian cities,” Brown told ABC radio’s The World Today on July 15.

The Greens’ progressive stance on issues such as the wars and refugees arriving in Australia has made the Murdoch media loathe them.

When they won the balance of power in the 2010 federal elections, Murdoch’s Australian outlets made no secret about intending to politically destroy them.

Murdoch may be apologising in Britain, but in his land of both the Murdoch media is unrepentant.

When, in December 2010, Marrickville Council in Sydney adopted a motion in support of the global campaign of boycott, divestment and sanctions (BDS) against Israeli apartheid policies, the Murdoch media went into overdrive.

It was particularly vitriolic during Marrickville Mayor Fiona Byrne's unsuccessful run for the Greens in the seat of Marrickville in the March 26 NSW state election.

Electronic Intifada said on July 5: “Under headlines such as ‘Council boycott of Israel self-indulgent’ (The Australian, 13 January 2011) and ‘North Korea, Marrickville: Going rogue’ (The Daily Telegraph, 13 January 2011), Marrickville’s mayor and councillors were accused of ‘interfering in Middle East affairs,’ while inflated estimates of the cost of the boycott to Marrickville taxpayers were publicised in apparent acts of scaremongering (‘Marrickville Council faces $4 million bill for Israel boycott,’ The Daily Telegraph, 14 April 2011).”

Accusations of anti-Semitism were a predictable feature of this campaign and may have been responsible for Byrne’s narrow loss in the state election.

The BDS movement was dishonestly characterised as a boycott of Jewish businesses, a characterisation that has been repeated by non-Murdoch newspapers, such as The Age, on July 15.

Murdoch’s broadsheets quipped that Marrickville was judenfrei, using the term the Nazis used in the 1930s and ’40s, to describe communities they ethnically cleansed. His tabloids used the English term: Jew-free.

If Murdoch’s empire collapses it will be because of the revelations of tapping phones and bribing police. There is no evidence that this has occurred in Australia. 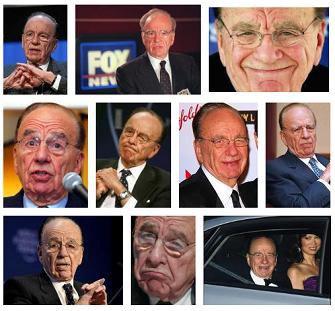 Murdoch is a Zionist thats why he is against Muslims.
He takes direction from the Jews in Israel.Jews run the media the banks,America and the world!Wipe Israel off the face of the earth and watch things change for the better,