On Tuesday about 50 people gathered outside Federal Resources and Energy Minister Martin Ferguson's electoral office in Preston to say Don't Let Martin Ferguson Dump on Muckaty in regard to inflicting a nuclear waste dump on an indigenous community who do not want it. For 18 months anti-nuclear organisations & activists have succesfully kept Minister Ferguson National Radioactive Waste Management Bill from becoming an act. In April 2010 250 Traditional indigenous owners and anti-nuclear activists protested in Tennant Creek in opposition to the proposed Muckaty Station Nuclear Waste Dump.

Opposition to the bill has been ignored by the Government. The bill was passed by the House of Representatives on 22nd February and introduced to the Senate on June 14. During it's debate in the Senate 100 protesters from around the country converged on Parliament house to contest the issue.

The nuclear waste dump is a strongly contested issue by many traditional owners of the Muckaty land trust. The 5 family groups of the Traditional Owners are divided, with many being opposed to the waste dump at Muckaty. They say the Northern Land Council has overlooked them. A Federal Court is still hearing a case about who the legitimate owners are who can authorise use of Muckaty Station as a Waste Dump.

At the moment nuclear waste is stored securely at Lucas Heights. A nuclear waste dump in the Northern Territory would result in the transportation of radioactive waste throughout this country. If a transportation accident did occur, which they sometimes do, nuclear radiation could be rleased endangering public health.

Independent Senator Xenophon said on June 14 "The Senate should wait until the Federal Court has made its findings as to whether those who claim to be the owners of Muckaty Station, who volunteered the site, are the correct parties to do so," reported the ABC.

In the debate on the bill Greens Senator Scott Ludlam said "The government has not delivered on its promise or its own party platform to "establish a consensual process of site selection, which looks to agreed scientific grounds for determining suitability and the centrality of community consultation and support." Instead it has set itself up for a divisive and entirely avoidable confrontation with a community unwilling to host the nation's radioactive waste."

Senator Ludlam tabled a banner (and included in Hansard) made by the Ngapa people of Tennant Creek and signed with handprints from all the family groups represented on the Muckaty Land Trust. The banner reads "no waste dump at Muckaty" in three languages.

As of June 22, the bill has still not passed the Australian Senate. 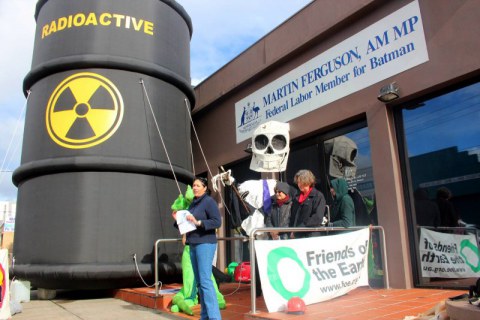 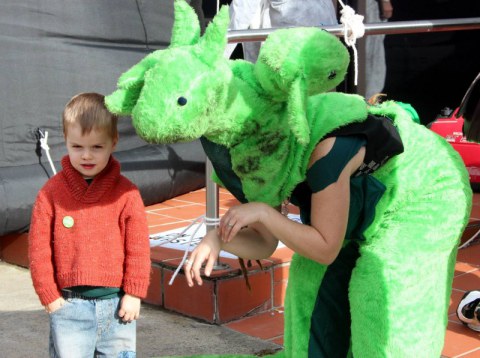