In the chilly waters of Iceberg Alley off the Greenland coast a little drama played itself out today between Greenpeace and oil explorer Cairn Energy over deep sea oil exploration in the pristine Arctic environment rapidly warming through climate change. Greenpeace are demanding the oil spill response plan for the rig should be made public. Kumi Naidoo, International Executive Director of Greenpeace, personally boarded the oil rig Leiv Eiriksson today with another Greenpeace activist, Ulvar Arnkvaern to deliver this message, with both being arrested.

Just before his arrest on the platform in a transmission to the Greenpeace ship Esperanza he said: "I did this because Arctic oil drilling is one of the defining environmental battles of our age. I’m an African but I care deeply about what’s happening up here. The rapidly melting cap of Arctic sea ice is a grave warning to all of us, so it’s nothing short of madness that companies like Cairn see it as a chance to drill for the fossil fuels that got us into this climate change mess in the first place. We have to draw a line and say no more. I’m drawing that line here and now in the Arctic ice."

Kumi Naidoo, traveled first via Greenland to the Greenpeace ship Esperanza and then with another activist by inflatable speedboat to the oil rig Leiv Eiriksson. The speedboat had to evade a Danish navy warship circling the rig, and then the two activists had to climb a 30 metre ladder up the outside of one of the platform’s giant legs.

The company were granted an injunction on June 9 in a Dutch court against disruption by Greenpeace entering a 500 metre exclusion zone around the drilling rig after two sets of protests launched by Greenpeace in the last month which has effectively disrupted the drilling program. The company asked for penalties of €2million a day, but were only granted €50,000 a day, and no more than €1 million in the case of multiple violations of the order.

While on board the Esperanza Naidoo said "For me this is one of the defining environmental battles of our age, it’s a fight for sanity against the madness of a mindset that sees the melting of the Arctic sea ice as a good thing. As the ice retreats the oil companies want to send the rigs in and drill for the fossil fuels that got us into this mess in the first place. We have to stop them. It goes right to the heart of the kind of world we want and the one which we want to pass onto our children.”

"The Arctic oil rush is such a serious threat to the climate and to this beautiful fragile environment that I felt Greenpeace had no choice but to return, so I volunteered to do it myself. Cairn has something to hide, it won’t publish its plan to clean up an oil spill here in the Arctic, and that’s because it can’t be done. I’m going onto that rig to give them the names of fifty thousand people who’ve emailed them to demand they publish their plan, and I won’t leave until I have it in my hands."

Greenpeace has made repeated requests for Cairn’s oil spill plan, including making a visit last month to the company’s headquarters to ask that it be made public. Cairn Energy claims the Greenland authorities won’t allow it to publish the spill plan, but Greenpeace has legal advice making it clear that Cairn could easily publish the plan if it wanted to.

An oil spill response plan is a requirement of the Norsok drilling standards, which Cairn Energy claims to follow, and the Arctic Council's offshore drilling guidelines. The Arctic Council specify in their Arctic Guideline 2009 (PDF) under section 7.2 on Response that "Operators should be required to have site-specific or operator-specific plans." and that "Operators should allow the opportunity for public review and comment of the Plan."

"People may wonder why I as an African care about what's happening in the Arctic, but scientists say that the unprecedented warming up here could have grave knock-on consequences for vulnerable people across the world. That's because a warming Arctic could dramatically change weather patterns many thousands of miles away."

Naidoo carried with him a statement signed by 50,000 supporters questioning how Cairn Energy would deal with a BP style deep water blow-out in the Arctic. His purpose for boarding the rig is to demand that the rig’s master orders an immediate halt to drilling, and also to request a copy of the rig’s missing oil spill response plan.

In the background are the many other oil exploration companies watching the events unfold. If Cairn Energy strikes oil this summer Exxon, Chevron and the other big oil companies (which have already bought up Greenland licenses) will begin drilling in the area and the Arctic oil rush will be on.

An oil spill in the Arctic would be near impossible to clean in this pristine environment - and would be much worse than the BP Deepwater Horizon oil spill in the Gulf of Mexico. British Energy Minister Lord Howell has been briefed in documents obtained by Greenpeace under Freedom of Information that "The impact of such a spill in the Arctic would be proportionally higher due to the lower temperatures and (in winter) lack of sunlight that will inhibit oil-eating bacteria (which played a large role in cleaning up the Macondo spill). The Arctic ecosystem is particularly vulnerable, and emergency responses would be slower and harder tha in the Gulf of Mexico due to the area's remoteness and the difficulty in operating in sub-zero temperatures...."

"Fossil fuel driven climate change is already making life hard for millions. I have seen this first hand where I come from in Africa and it will only get worse unless we can phase out our addiction to oil," said Naidoo. "We have to draw a line somewhere and I say we draw that line here today. You should join me by adding your name to our petition calling on Cairn to publish their oil spill response plan."

As Naidoo climbed up the ladder workers on the rig used a fire hose dousing him with freezing water in a failed attempt to stop him reaching the platform and delivering his demand to see the oil spill response plan and deliver the petition.

In a final radio transmission to the Esperanza from the oil platform he said
"It looks like I’m being arrested now. They say I’m going to be taken to Greenland, but what happens after that I don’t know."

Kumi Naidoo has been an environmental and social justice activist for many years before becoming Executive Director of Greenpeace. In his native South Africa he was a youth leader in the anti-apartheid movement, where he was arrested several times and charged with violating provisions against mass mobilisation, civil disobedience and for violating the state of emergency. He lived underground before being forced to flee South Africa and live in exile in the UK.

The Esperanza isn't staying around for further infractions of the court injunction. Greenpeace have decided to move the battle elsewhere. Ben Stewart on board the Esperanza said "After over a month of non-stop action to stop dangerous deep water drilling in the Arctic, which has seen 22 Greenpeace activists including Kumi arrested after braving freezing seas to protest against Cairn’s reckless drilling, it is time to move the campaign up a gear and out of the Arctic."

The Esperanza, an ice class ship, will be conducting a scientific tour around Greenland to investigate climate impacts that are already under way. Greenpeace will step up legal and public campaigns for the disclosure of the secret oil spill response plan through a complaint to the Greenland Ombudsman, through the UK legal system, and through Cairn’s shareholders.

"This is far from over. The battle to stop Arctic oil drilling has only just begun," said Ben Stewart, "A movement is building against this madness, one that will challenge the oil companies at every turn until they are locked out of the Arctic. These are critical years, ones in which the struggle to prevent the worst effects of climate change will be won or lost. The Arctic will be right at the heart of that struggle. The melting ice is a warning, and if we have the wisdom to heed it a bright future is still possible." 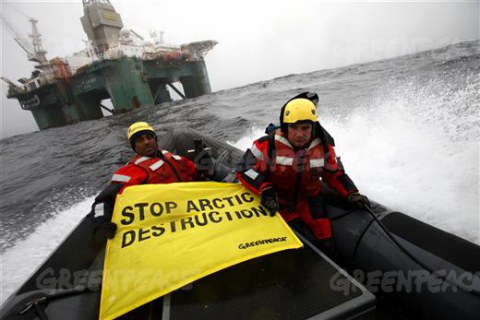 Re: 'Drawing that line in the Arctic ice' - Greenpeace CEO ...

I wonder where the oil and fuel came from to power green peaces protest boats?May be the same oil rig they are protesting about get real wankers