Amid the latest UN climate talks taking place in Bonn Germany Friends of the Earth International have released a report highly critical of the role of the World Bank in continuing to fund dirty energy investment in developing countries and continuing to push carbon markets and offset programs which essentially privatise developing country forests in the process of generating carbon offsets.

The World Bank was made interim trustee of the new Green Climate Fund in December 2010 in Cancun. The Fund was established to assist developing countries to adapt to the impacts of global warming.

Friends of the Earth International Economic Justice Program Coordinator Sebastian Valdomir said on release of the report in Bonn: "The World Bank is part of the climate problem, not the climate solution. Its conflicts of interest, and appalling social and environmental track record, should immediately disqualify it from playing any role whatsoever in designing the Green Climate Fund, and in climate finance more generally."

The Bonn conference, running from June 6 - 17, is a build-up to COP 17, which will be held in Durban, South Africa from 28 November to 9 December 2011. The Bonn meeting has attracted more than 3,000 participants from 183 countries, including government delegates, representatives from business and industry, environmental organisations and research institutions.

Two projects of particular note detailed in the report are the US$3.75 billion loan to finance Eskom's controversial 4,800 megawatt Medupi coal-fired plant in South Africa and the investment of US$450 million for the Tata Mundra 4,000 megawatt coal-fired power plant in Gujarat, India. The Gujurat plant is expected to emit an estimated 25.7 million tons of CO2 annually for at least 25 years. The South African Medupi plant will be the world's fourth-largest coal-fired plant and will emit an estimated 25 million tons of CO2 per year with 40 new coalmines to feed the Medupi plant.

The Bank continues substantial investment in fossil fuel based power plants despite the potential for renewable energy in South Africa and India. The report states on page 8

"The Bank did not give serious consideration to alternatives to coal, even though South Africa has significant renewable energy potential. The World Bank is allocating less than 7% of the loan to renewable energy15 despite the fact that NERSA calculates that wind energy will be cheaper than coal by 2025, and concentrated solar power will be on a par with coal by 2030 (Groundwork, 2009). Furthermore, renewable energy technologies create more jobs than coal-fired plants: wind, for example, creates 12.6 jobs per gigawatt hour (gwh) of power as opposed to coal's 0.7 jobs (Groundwork, 2009)."

The Bank has also been increasing investment in large hydropower since 2003 strongly aguing for their inclusion under the Clean Development Mechanism (CDM) and carbon offset credits even though many of the projects were already under construction without any offset credits with the projects involving substantial social and environmental impacts.

"Scientific studies have shown that decomposing organic matter in reservoirs caused by dams has resulted in significant emissions of the greenhouse gases methane, nitrous oxide and carbon dioxide (International Rivers, 2008). Methane emissions from dams currently account for at least 4% of the total global warming impact of human activities, and constitute the largest single source of anthropogenic methane (Lima, 2007; International Rivers, 2008)."

The Nam Theun 2 dam in Laos, funded by loans by the World Bank and Asian Development Bank, was opened in December 2010 and has displaced 6,200 Indigenous Peoples on the Nakai Plateau and negatively affected more than 110,000 people downstream, who depend on the Xe Bang Fai and Nam Theun rivers for their livelihoods. According to the report Villagers continue to suffer from the damaged river ecosystem as their fish catch and water quality have declined. The rport authors accuse the World Bank of violation of its own safeguard policy on resettlement by failing to ensure alternative sources of domestic water, and not providing compensation for the loss of agricultural land. The Dam also opens up access to the Nakai-Nam Theun National Protected Area, exacerbating logging and poaching and threatening biodiversity.

World Bank investments in Carbon offsets and investment in Reducing Emissions from Deforestation and Degradation (REDD) was also criticised in the report for failing to take measures to protect community rights and even to reduce deforestation.

"An analysis of a range of REDD Readiness Preparation Proposals (R-PPs) uncovered the fact that they neglect national legal frameworks with regard to customary rights, the right to Free and Prior Informed Consent (FPIC), and land titling (FERN & FPP, 2011). They may pay lip service to forest peoples' rights and benefit sharing but they do not address land conflicts; they prioritise state ownership and carbon monitoring over livelihoods, biodiversity and cultural values. They also tend to be reliant on analysis that unjustifiably blames local communities for forest loss and damage. National consultations with Indigenous Peoples and other forest dependent communities on these R-PPs have been "either nonexistent or inadequate" (FERN & FPP, 2011)."

The Cancun negotiations of December 2010 paved the way for REDD inclusion in carbon markets and carbon trading. The Friends of the Earth report says that "The World Bank's Forest Carbon Partnership Facility (FCPF) is already designing forest carbon trading systems that are clearly "based on the assumption that carbon offsets will eventually deliver funding for REDD" on a global scale (FERN, 2011)."

A report published in Januray 2011 from some of the world's top experts on forest governance has criticised various international climate change accords including REDD (Reducing Emissions from Deforestation and forest Degradation) and REDD+ for their narrow focus on carbon storage which has failed to stop rampant destruction of the world's most vulnerable forests and often acted to further marginalise indigenous peoples.

Policy Analyst at Friends of the Earth United States Kate Horner stated in a press release from the Bonn climate talks "The World Bank claims to provide leadership on climate change but, as shown in this report, it is a major funder of dirty fossil fuel projects, carbon trading and mega dams. These initiatives deepen poverty and push us closer to the brink of a global environmental disaster." 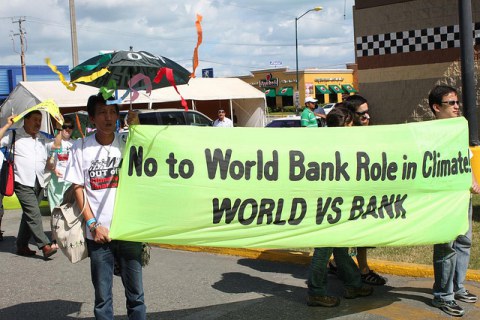 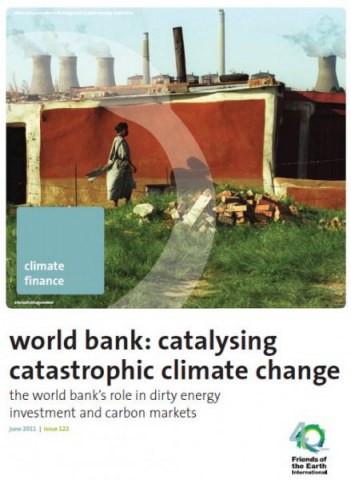 Are we not the new neocons of fear mongering when we tell our kids the world is dying and it's their fault and only they can save it and they won't have kids on a dying planet, all just to make them turn the lights out more often? I can't support climate blame anymore. This has turned into our Iraq War of climate WMD's and lies and fear mongering.
Count me out.

So coal is bad, now hydropower is bad. Do FoE/IR seriously believe wind and solar can provide enough power? How long before they campaign against wind and solar as being unreliable, expensive and blots on the landscape? Can they offer credible and reliable sources of peak electricity supply

Takver you are nearly there. The push for a climate tax comes from Zionist run banks they are the ones who stand to make the most money out of this, you have all been sucked in by the banks and the greedy the Zionists.You know the old rule follow the money trail and you will find the truth!

You better delete this comment or all you climate change, global warming, carbon tax, carbon dioxide tax,greenies will look like fools if the real truth gets out!