Below is a description of the rally from Melbourne Protest weblog. A huge banner dropped from the roof of the Hotel Windsor could be seen yesterday from Parliament House over the heads of several hundred protesters angry at the recent EPA approval granted to energy company HRL for a brown-coal power station in the Latrobe Valley – if anyone in there was watching…
Related: Links to video and other media coverage of the rally on the Stop HRL campaign website

The protest was a snap-action in response to last Friday’s announcement – though an even snappier action occurred on the day itself. Organisers used the extra few days to prepare the banner drop shown above, but also a list of speakers including Mark Wakeham from Environment Victoria, Julien Vincent from Greenpeace, and Paul Connor of StopHRL. MC was Victoria McKenzie-McHarg of Environment Victoria. Apart from the banner drop, visual emphasis to the message was given not only by the familiar placards and banners, but also by the arrival of a line of young people chained together and shepherded by a ‘Premier Baillieu’, symbolising the Victorian communities enslavement to the coal industry and its supporters:

A media release from Greenpeace referred to the EPA’s ‘bizarre move’, and during her summing up at the end Victoria McKenzie-McHarg explained how she had attended a meeting with the EPA that morning, where she was told that the majority of residents in the area had main their position clear in the last election by voting either Liberal or Labor, given that both these parties were supportive of coal-based electricity generation, this in spite of the fact that this had not been a campaign issue, and above all in spite of the fact that the HRL application had been the subject of a record more than 4000 submissions, most if not all opposed to the project.

Mark Wakeham of Environment Victoria was one of the speakers, with his three-year-old son, who, he pointed out, would see the HRL plant still operating when he was 45 – if it went ahead, which he and other speakers made it plain they would do all possible to stop

Mark Wakeham listed three reasons why the rally was being held: the incompetence and dishonesty of the company, the addiction of successive governments to coal, and now most recent and saddest, the failure of the EPA. But he gave two reasons to be glad to be there: the knowledge that the cause was right and one they believed in, and the confidence that they were going to win.

This last point was taken up by the Greenpeace speaker, Julien Vincent, who went through some of the history of the project, focussing especially on the financial side. He pointed out that when HRL had won a $100 million federal government grant in 2006 an expert panel determined that the project could not be viable at less that 400MW – see Greenpeace blog archive and Clean Energy page – whereas the eventual approval was for only half the original proposal, or 300MW. And the company had no joint venture partners, its only funding so far being the federal grant and another, $50 million, from the Victorian state government. Given Prime Minister Julia Gillard’s campaign promise that no new coal-fired power stations would be built in Australia if Labor won the last election, it was for her to withdraw the federal grant and kill the project.

Final speaker – Julien Vincent having been interrupted by the banner drop – was Paul Connor of the StopHRL collective, who began by quoting US climatologist Professor James Hansen, that coal is the ‘greatest threat to civilisation and all life on our planet‘, adding that brown coal is the worst kind of coal. This was obvious to everyone present today, but clearly not to everyone inside the building. He reiterated the campaign’s determination to stop the project, even if it meant lying down in front of the bulldozers… 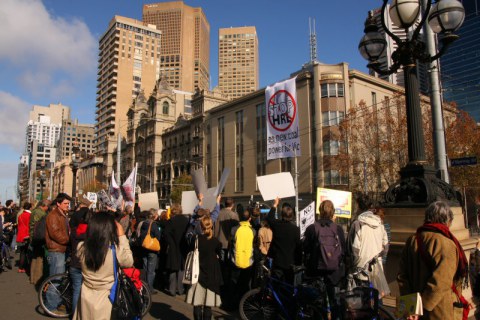