Hundreds of people rallied at Maribyrnong Detention Centre in Melbourne on the 25th of April 2011 as part of a national day of action against mandatory detention that also saw protests in Curtin in WA and Villawood in Sydney. The rally heard from speakers before marching around the rear of the detention centre. For a second time in a number of weeks protestors were capscium sprayed outside a Detention Centre by Victoria Police. The police attacked protestors several times with capscium spray, batons and horse charges to prevent protestors from tieing ribbons or shaking the fence. It is becoming clear that the Victorian Police has now adopted the use of capscicum spray as standard practice as a crowd control technique.
Related: Account of the rally by John Passant: Maribyrnong, refugees and democracy -- Political analysis of the day by John Passant: Tear down your detention centres, Julia Gillard

It started off well. 200 or so people at Maribyrnong turned up to demand that the Gillard Government close down its detention centres and free the refugees. We listened to various speakers making the same points - asylum seekers are welcome here.

We chanted about locking up Gillard and throwing away the keys, ending with ’Free the refugees.’

We had ribbons to tie on the perimeter fence to leave a message for these prisoners of mandatory detention if they couldn’t hear us.

And so we set off around the hell hole, chanting loudly in the hope the detainees could hear us.

We walked past cops on horseback and I thought WTF? When we reached a spot around the back six or so two legged police lined up in front of the perimeter fence, a wire contraption surrounding another, larger fence of stronger metal and a more secure structure.

The cops let some people tie ribbons on the fence. Then they started pushing us back.

Then two people in front of me reeled back, clutching their eyes. The cops had used capsicum spray on them. One was a photographer. Evidently taking photos is a threat to democracy too like tying ribbons to a fence.

Five people helped the other protester as he staggered about, blinded and in pain for the crime of attending a demonstration.

This was police assault, pure and simple, designed to intimidate us. It didn’t and it won’t.

Then the horses came in to force us back from the fence. Apparently ribbons, fence shaking and photos are such a threat to democracy as we know it that horses are needed to protect it and its symbol – the Maribyrnong concentration camp that keeps innocent people in and out.

Its fence serves two purposes now – brutalising refugees and now demonstrators. We are all refugees.

So we moved to another spot. This time the cops prevented us getting near the fence. The horses came in and one cop drew her truncheon and laid into a group of protesters at the front attempting to exercise their democratic right to put, shock horror, ribbons on a fence.

Are ribbons a threat to democracy? Apparently so, if the actions of the cops on their horses and the truncheon yielding defender of all that is right and proper are any guide.

As these brave armed defenders of democracy repulsed yet another assault on freedom we chanted ‘Get those animals off the horses’.

Unfortunately the horses didn’t cooperate. They aren’t clever enough to understand concepts like democracy. Apparently the cops have that trained out off them too in their defence of the established order and the criminal mandatory detention system.

And so we went back to our original spot at the fence and tried again to tie ribbons on the fence. Some people were able to do that.

The cops let us do that for about two milliseconds until one of them realised we dangerous revolutionaries were subverting the natural order and so they stopped us indulging in the heinous crime of ribbon tying.

Let’s hope that the ribbons of freedom fly high and send a message to our brothers and sisters in the detention centres. We are with you and no amount of police provocation or attacks will stop us expressing our solidarity with you.

Refugees are the real heroes with their determination, commitment and struggle to win democracy and freedom.

300 protesters called for an end to Mandatory Detention today (April 25) rejecting Wayne Swan's claim that it was disrespectful to protest on Anzac Day.

"What more appropriate day is there than Anzac Day to protest in support of refugees. War creates refugees," said Refugee Action Collective (Victoria) spokesperson Karen Jones in front of the lively crowd at the entrance to the detention centre.

The protesters tied ribbons to the fence of the detention with messages written on them to the refugees, expressing support for human rights.

Many people at the action were concerned about the news that an Iranian minor was moved from a detention centre in Broadmeadows to Maribyrnong pending deportation. He is said to have been moved at 2am in the morning where guards used violence to restrain friends (other detainees) that protested inside. Refugee Action Collective have vowed to have further actions opposing any deportations.

"This action follows a protest in Villawood Detention Centre...and we support them one-hundred percent," said Benjamin Solah from the Refugee Action Collective (Victoria)

As the rally wrapped up, the crowd chanted "we will be back" indicating support for further actions outside both Maribyrnong and Broadmeadows Detention Centres.

"We totally condemn Bowen's proposal to punish people for resisting their treatment and support detainees fighting back," said Benjamin Solah. 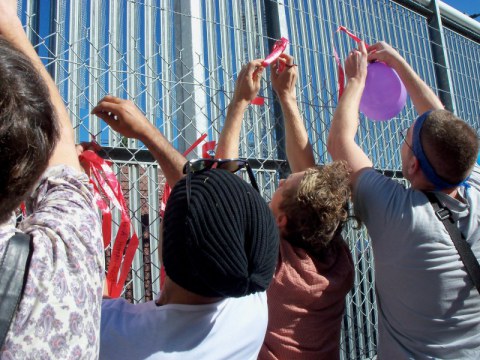 From all reports this demo was much better than the one a few weeks ago.
But just one question: Why has Socialist Alternative now changed its approach?
Only a few weeks ago they marched off abandoning three escaped refugees and berated those who dared to shake the fence at Broadmedows. When anarchists were pepper sprayed they said nothing and left them to their own devices.
Now they all of a sudden tearing down the fences is the job of the day and cops using pepper spray needs to be opposed.
Did some miraculous conversion take place at 'Marxism' or is there some other answer?

also, numbers of protesters have been greatly exagerated here. there were 60 protesters max. and just as many cops.

There was actually around 250 protesters, 38 police, and 6 mounted police (police on horses), I counted.

Who is this John Pissant? What a poorly written, childish piece of crap. It was full of do-gooder propaganda. The people in the centres came here illegally and need to be checked out before they can be released into the community or sent back. Why would the coppers let all the dickheads close to the fences, doh, it IS a detention centre and there are crazies who would try to cut the fences or otherwise vandalise property that my taxes have helped pay for.

hi,
they did not come here illegally, federal law actually states that Australia is required to take in asylum seekers, & seeking asylum is not a crime - whether by plane or boat. there are many reasons people (read xenophobes) don't want asylum seekers to be properly processed, & it has nothing to do with anything 'illegal'. get your facts straight.