Akbayan (Citizens Action Party) supports the democratic opposition in Libya that seeks to end the 43-year-old dictatorship of Muammar Ghadafie. It cannot, however, support the massive armed intervention launched by the United States, France, and Britain on Sunday, March 20.

A “No Fly Zone” to protect civilians is one thing. An armed assault aimed at regime change is another thing altogether. The latter is the intent of the US-led intervention, which, although displaying the fig-leaf of a United Nations Security Council resolution, goes far beyond the defensive aims of a no-fly zone to cross over into aggression against Libya.

Firing on ground troops and preemptively and indiscriminately destroying anti-aircraft installations will bring about precisely that loss of life that the intervention ostensibly seeks to prevent. Civilians are being killed by the western assault when civilians were supposedly the people the action was supposed to protect.

The fight for democracy waged by the Libyan people must be supported, but not by western military action, that is an instrument of regime change. This action may ostensibly have humanitarian objectives, but its main objective is to reassert western hegemony in a region that is caught up in the winds of democratic change.

Owing to its support for authoritarian regimes in the Middle East, the US has lost much of its credibility among the Arab peoples. Indeed, the US may be said to be one of the targets of the Arab democratic revolution. In this context, the intervention in Libya for regime change is a belated US and western attempt to appear as a pro-democratic force, shore up its tattered legitimacy, and remind the Arab nations of its strategic hegemony in the region.

The West’s “armed intervention for democracy “will not advance the cause of democracy. Indeed, it will discredit it by associating democracy with a western show of force. The intervention in Libya now seeks stoking forces as powerful as the democratic movement: Arab nationalism and Islamic solidarity. It will end up creating conflicts among movements, which should be complementary, and the only victor will be western hegemony.

We in Akbayan call for an immediate end to the US-led war on Libya.

We call on global civil society and for governments and peoples throughout the global south to support the Libyan people’s struggle for democracy against Ghadafie.

We ask especially the democratic forces and transition governments in Tunisia and Egypt to come to the aid of the Libyan people.

We call for an end to all efforts to maintain or reassert US hegemony in the Middle East. 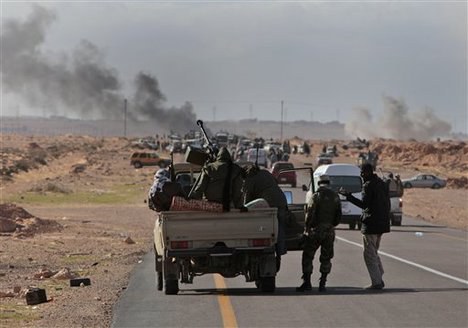 Re: End the US-led Armed Intervention in Libya

So you hate Gadaffi, but don't want the west to help end his reign.

This is just another knee-jerk reactionary rant against the USA.

There is going to be civilian death no matter which way things go. It is unavoidable. It's best that the west intervene now and finish things off quickly.

The criticism that should be directed at the international coalition is that they are not doing enough! They should be giving clear support to the rebels - restocking their arms, co-operating with them and taking out Gadaffi's forces. Their should be a clear objective of regime change.

Support the revolutionaries in any way we can!

Re: End the US-led Armed Intervention in Libya

6:00pm
James Bays, Al Jazeera's correspondent in Benghazi, said there is a "thank you" rally taking place there.
People have gathered to thank Britain, France, the UN, and Qatar - the reason for it is to thank international nations that have taken part in this air campaign.
If you asked those people they'd say they'd like more air strikes until the members of their family, who are opposition fighters, make their way to Tripoli.
Every family has someone who has gone towards the front line."