On March 17, 2011, the UN Security Council passed a resolution authorising military intervention by the Western imperialist powers or their puppets in Libya. The justification for this is to prevent further loss of life in fighting between forces remaining loyal Muammar Gaddafi and forces supporting the uprising that began on February 15 against his 42-year-old rule, and to support the pro-democracy forces.

However, the imperialists’ claims to be in support of democracy, and concerned about loss of life, are contradicted by events in Bahrain, a key Western ally where the US Navy’s Fifth Fleet is based. Here the US response to brutal attacks by the monarchist government against unarmed, non-violent pro-democracy protesters has been to call for restraint — by both sides.

Furthermore, on March 14, 1000 troops from the Kingdom of Saudi Arabia (a brutal feudal dictatorship and the chief US ally in the Arab world) and 500 police from the United Arab Emirates (also a Western-backed monarchy) invaded Bahrain to help the Bahraini government crush the protests. The intervention happened under the umbrella of the Gulf Cooperation Council (GCC). Ironically, the GCC was one of the key institutions lobbying for military intervention in Libya.

During the 1970s and ’80s, the Gaddafi government was supported by most progressives throughout the world because following the 1969 revolution that overthrew a Western-controlled feudal monarchy, his government redistributed the country’s oil wealth to the benefit of the country’s poor and took an anti-imperialist line in foreign policy. These policies also earned Gaddafi the hatred of the imperialist powers — sanctions were applied under a number of pretexts and in 1986 the US President Ronald Reagan sent warplanes to bomb Libya.

However, the Gaddafi regime was never socialist and over time became increasingly dictatorial. Much of its anti-imperialism was simply rhetoric and its support for just liberation struggles, such as that of Palestine, was inconsistent and used as a bargaining chip to be traded away in deals with imperialism.

During the 1990s and 2000s its policies took an increasingly neoliberal direction and its standards of literacy and health care, for example, which had improved after the revolution, declined to levels similar to neighbouring countries. Furthermore, Filipinos are aware that it relied on the exploitation of foreign workers. The West rewarded these policies with a renewal of diplomatic and military support. The right-wing Berlesconi regime in Italy became particularly close to Gaddafi, and Britain remained a major arms supplier almost until the point when the British government became a main advocate of military action against the régime.

The Libyan uprising for democracy, inspired by the uprisings that overthrew imperialist-backed presidents in neighbouring Tunisia and Egypt, is worthy of support by progressives. Gaddafi’s initial response was to appeal to the imperialism to save him, accusing the opposition of being al Qaeda. It was only when it became clear that the West was going to opportunistically use the uprising, and the regime’s brutal response, as a pretext for direct intervention that he revived his anti-imperialist rhetoric from the 1970s aand 1980s.

However, imperialist military intervention must be denounced as the hypocritical opportunism that it is. The record of Western interventions in the Middle East speaks for itself. Far from saving lives, it will cost more. The rules of engagement being proposed mean that if the Gaddafi loyalist forces bomb civilians in rebel-held Benghazi the imperialists will bomb civilians in government-held Tripoli. And far from helping democracy the intervention is an attempt to hijack the Libyan uprising and establish a base from which to derail the unfolding revolutions in Tunisia and Egypt.

The corporate media, ever subservient to imperialism, has shed rivers of crocodile tears over Libya, while paying very little attention to Bahrain. What coverage it has had has falsely portrayed the uprising as communal violence between Sunni and Shi’a Muslims. The media has also parroted the proganda of the Bahraini and Saudi kings that the protesters are Shi’a religious fundamentalists backed by Iran.

The reality is that while the Sunni monarchy has discriminated against the Shi’a majority, the protests have united Sunni and Shi’a, religious and secular, in a struggle for democracy, human rights, gender equality and economic opportunity.

These are the values which the imperialists’ intervention in Libya claims to be in support of. Yet in Bahrain, the imperialists have sent in their Saudi and UAE puppets to shore up the religious sectarian monarchy. Under the protection of the Saudi and UAE forces, pro-monarchy thugs have attacked and burnt the protest camp and have been roaming neighborhoods attacking democracy supporters. Health workers have also been targeted. Hospitals have been taken over the military — wounded protesters have been prevented from entering and doctors, nurses and paramedics prevented from leaving.

Anyone with illusions that Western intervention can bring democracy need look no further than Iraq. The US-led invasion and occupation that has cost more than a million Iraqi lives since 2003 was in the name of bringing democracy. Instead it has brought communal divisions, religious extremism, a breakdown in basic services such as electricity and water, social dislocation, collapse of the health and education systems, mass unemployment and, above all, violence.

That pro-democracy protesters are being shot down on the streets of Baghdad and other Iraqi cities by the puppet régime installed by the West in the name of bringing democracy shows clearly what imperialist intervention brings.

Party of the Laboring Masses - Philippines 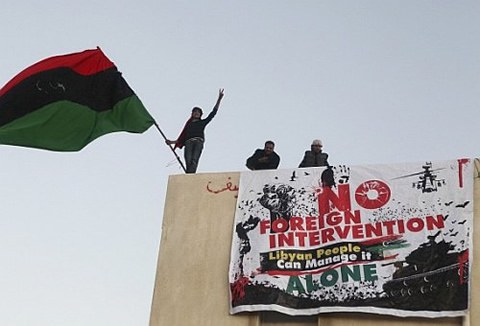