The corpse of Ferdinand Marcos remains preserved in a mausoleum. It is a spectral remnant of a past that refuses to let go: a time when Marcos fashioned himself to be a leader who used “utopian causes” to centralize power and justify his authoritarianism.

For Akbayan Youth (Citizens Action Party), Marcos’s corpse is the ultimate metaphor for the society he sought to create: a society that masked social tensions through the sheen of artificial order and discipline. The EDSA People Power revolution, which we commemorate, was the result of these tensions – tensions Marcos could no longer contain. It was the climax a 25-year struggle of ordinary freedom-loving Filipinos.

Unfortunately, many of us are detached from the memory of People Power because of the country’s sorry state. In this time of extreme poverty and social inequality, it is easy to pass off the revolution as a failure. Akbayan Youth understands this desperation, for we acknowledge that the country is still an elite democracy.

Despite this, we strongly oppose the rehabilitation of Marcos’s memory as a response to today’s problems. Recently, Senator Ferdinand Marcos Jr. claimed that, had his father stayed on as president, we would have been like Singapore – a sentiment echoed by his supporters and sadly, by some our fellow citizens. The good senator and his supporters also conveniently neglect their hero’s poor human rights record.

Their statements are dangerous and distort history. Ferdinand Marcos ran a brutal government that fundamentally limited the freedom and liberty of many Filipinos. Those who opposed him cannot simply be dismissed as undisciplined children who sought to foment discord in society. Many of them fought for the restoration of democracy and the marginalized: those who suffered under martial law-era cronyism, corruption, and brutality. There is simply no excuse in the world to rationalize the illegal detentions, disappearances, and killings that occurred under Marcos.

Apart from massive human rights violations, the Marcos government also engaged and promoted widespread corruption, leading to the emptying of our coffers and the ballooning of our national debt. Indeed, the Philippines remains poor today, but much of this poverty is a result of actions and policies that can be traced back to the Marcos regime. The debt burden of Cory Aquino and other post-EDSA presidents was a result of a Marcos-era economy designed to enrich cronies and family members. No amount of nostalgia for an “orderly past” will change this.

Akbayan Youth, as a progressive youth organization committed to the development of Philippine institutions, remembers the EDSA revolution not only as the end of a corrupt and violent regime, but also the beginning of long-term redemocratization.

The building of a functioning democracy is an ongoing process. Akbayan Youth, together with its mother party, Akbayan are committed to a long-term struggle that aims to turn the dream of EDSA into reality. In contrast to the defeatist stance of some, we are striving for the modernization of institutions that urgently require the intervention of civil society. We are not simply waiting for a benevolent dictator to do things for us.

As an activist youth organization, Akbayan youth believes that the time for complaining is over. For those who want change, the solution is not to glorify past authoritarianism, while neglecting opportunities for genuine change in the present. EDSA will, indeed, become a failure if young people do not participate in the building of a vibrant democracy. The end of authoritarianism opened opportunities for citizen’s participation; it is our task to make the most out of this. Otherwise, there will be no one else to blame.

We will only bury Marcos’s rotten corpse once we have exorcised the ghost of the political passivity he encouraged. ###

APL chides P-Noy for his ‘myopic’ view on Edsa; Bongbong Marcos for his bizarre denial

By Alliance of Progressive Labor (APL)

PRESIDENT Noynoy Aquino (P-Noy) must be reminded that it would take more than good governance, judicious government spending and anti-corruption drive – three themes that he kept harping on in today’s 25th anniversary of the Edsa Revolt – to “free the nation from poverty” and to build “a more fair and equitable society.”

This narrow-minded if not simplistic outlook on how to solve the deep-seated inequality of wealth and power while still enthusiastically implementing anti-poor economic policies and quietly maintaining traditional politics is indicative of his equally myopic view on the 1986 uprising, including its major players, the Alliance of Progressive Labor (APL) stated.

“For instance,” the APL said, “the role here of the security forces and opposition bigwigs had always been magnified, while there was a tendency to minimize the more crucial and more heroic feats of the anonymous multitude of people that packed Edsa, as well as the pioneering efforts of the anti-dictatorship movement decades before 1986.”

It is no surprise that in his first EDSA celebration as a president, Aquino extolled more the military and the police, and even the political turncoats or those former martial law loyalists who switched sides only when the tide was turning against the 20-year regime of Ferdinand Marcos, observed the APL.

It is no surprise, the APL added, that while Aquino proudly announced the construction of an initial 20,000 housing units for the soldiers and police – which they will rent-to-own for only P200 a month – he was mum on the same shelter problem of the more numerous informal settlers and even lowly paid workers whose sectors actively participated also in 1986.

Likewise, the APL again said, that while he took a swipe at Imelda Marcos’ “penchant for shoes” and the “betrayal of duty” of Gloria Macapagal-Arroyo, Aquino continues to adhere to many socioeconomic programs of the past regimes that worsen the very poverty that he ostensibly wants to eradicate.

Included here is the Marcos-era automatic foreign debt payment – which is ironic amid Aquino’s “responsible spending” stand and the lack of funds for social services – as well as the flawed “market-oriented” policies in the MTPDP (Medium-Term Philippine Development Plan) for 2011-2016 and a long list of neoliberal economic programs that have already been proven throughout the world for primarily benefiting only a few corporate elites and their cronies.

“It’s time now for P-Noy to walk the talk and prove that his ‘right path’ promises are not mere rhetoric or empty slogans,” Josua Mata, APL secretary general, challenged Aquino.

At the same time, the APL blasted Sen. Ferdinand “Bongbong” Marcos Jr., son of the dictator, for “hallucinating” that the Philippines could have been “a Singapore now” if the Edsa 1 did not happen. “It’s either he is also an incorrigible liar like her parents or he is in a bizarre denial stage where he honestly believes that the charges against the regime of his father – the gross violations of human rights and large-scale robbery – are nothing but mere figments of imagination of the people,” the APL retorted. 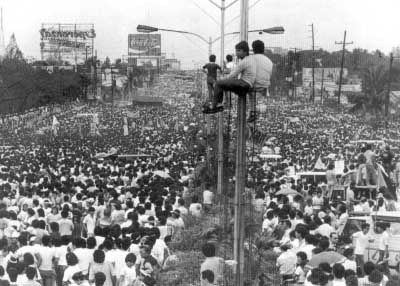 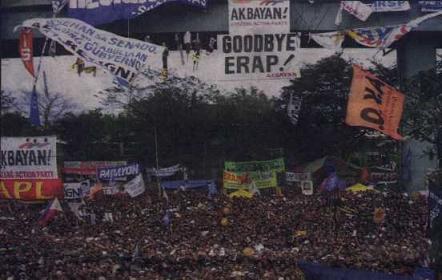 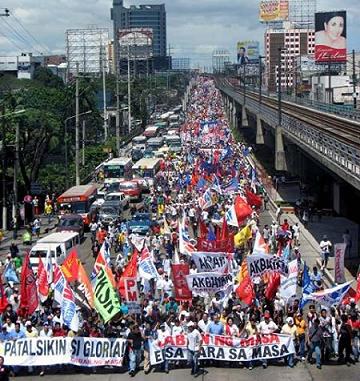