Under blue skies and the towers of RMIT people gathered to remember two Tasmanian aborigines who were executed on this site in Melbourne on January 20, 1842. There is a growing campaign to acknowledge this forgotten history and to give recognition to Tunnerminnerwait and Maulboyheenner as freedom fighters resisting the invasion and European settlement of Australia.

The Commemorations have been occurring on January 20 for the last 6 years, starting small and now numbering over 100 people. (Yes, I did a head count today). In 2009 the newly elected Melbourne Lord Mayor Robert Doyle even attended to commemorate this story of aboriginal resistance.

The event was launched by indigenous activist Robbie Thorpe, from the Gurnai people, doing a brief welcome to country ceremony while the smell of burning gum leaves wafted amoung the assembled crowd. Robbie maintains that Australia is one huge crime scene, a scene of genocide. Sovereignity has never been ceeded by the aboriginal people who resisted the invasion. Australia is the only British Commonweath country not to have signed a treaty with it's indigenous people. (Youtube: Robbie Thorpe - Welcome to country)

Sharon Firebrace, a Wiradjuri person active and living in Melbourne, also spoke passionately about the need to write Tunnerminnerwait and Maulboyheenner into the history books and the education system and the continuing need to address the problems of Australia's First Nations people. (Youtube: Sharon Firebrace)

Dr Joseph Toscano has been the primary spokeperson who has articulated the story to the public backed by a commemoration committee. (Watch Youtube video) The essential details were researched by Janine Roberts and published in 1986 in the book Jack of Cape Grim. Toscano recited a list of apologies of people invited who could not attend which included the Governor General Quentin Bryce, Julia Gillard (when she was Deputy PM), Lord Mayor Robert Doyle (who attended in 2009) and other councillors from Melbourne City Council.

Joseph Toscano called for January 20 to be indigenous freedom fighters day; to be celebrated and commemorated across Australia in big events and small from 2012.

Greens Councillor Cathy Oke attended and gave a succinct report on Melbourne City Council progress on a comprehensive survey of indigenous history and culture in the area. The gears still seem to move awfully slowly.

Adam Bandt, the Greens Federal member of parliament for Melbourne spoke and gave his support for the campaign for public recognition for the two freedom fighters, a small step towards negotiating a treaty with aboriginal Australia and reconciliation. (Youtube: Adam Bandt)

Herman Wainggai, Asia Pacific co-ordinator of the West Papua National Authority spoke from personal experience - "If you don't fight you lose". Many Papuan people have been killed by the Indonesian military in the struggle for freedom and independence for West Papua and his words came from the heart and in solidarity with first nations peoples of Australia. (Youtube: Herman Wainggai)

Tasmanian aborigines Tunnerminnerwait and Maulboyheenner were the first judicial executions in Melbourne on January 20, 1842, The execution was held in public attended by about 5,000 people, a quarter of Melbourne's population at the time. The two had been found guilty of murder of two whalers on circumstantial evidence in a court in which they could not make statements in their own defence. The Jury had asked for clemency due to the circumstances, but this was refused by Colonial authorities in Sydney.

Along with Planobeena, Pyterrunner, and Trucannini, they had waged an 8 week campaign of resistance to settlement from Dandenong to Western Port and South Gippsland districts on the outskirts of Melbourne that had the new settlement of Melbourne in uproar. It took 3 military expeditions to successfully track and capture them, with the help of native police.

After speeches and an open microphone for comments, a silent procession was held down to the Queen Victoria Markets, the site of Melbourne's first cemetery where the bodies of the two executed aborigines were interred. Bundles of flowers were laid on the hot tarmac, a minutes silence was observed, and the sounds of the didgeridoo throbbed over the market briefly played by Robbie Thorpe. 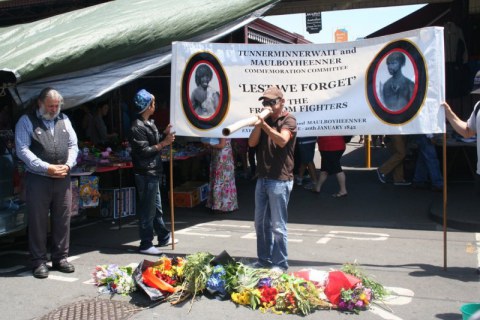 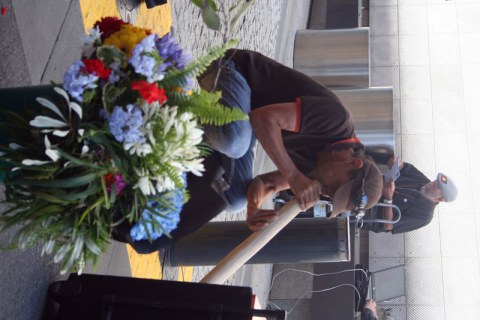 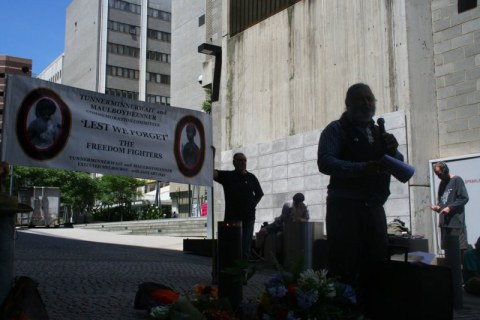 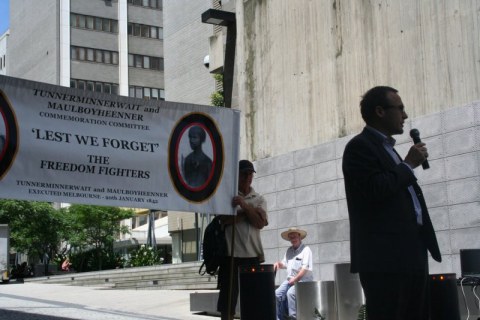 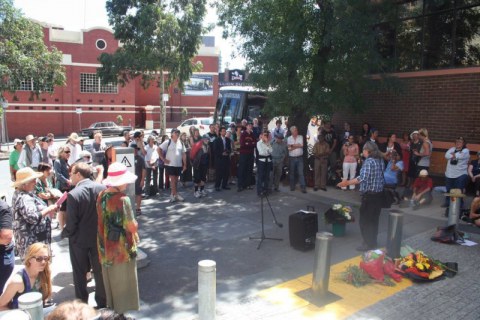 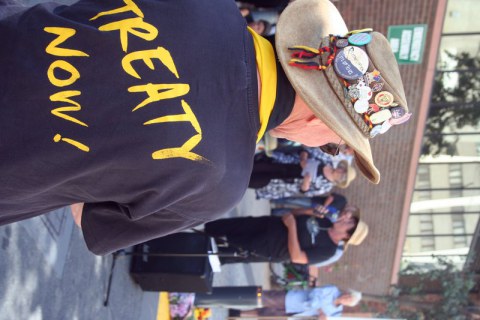 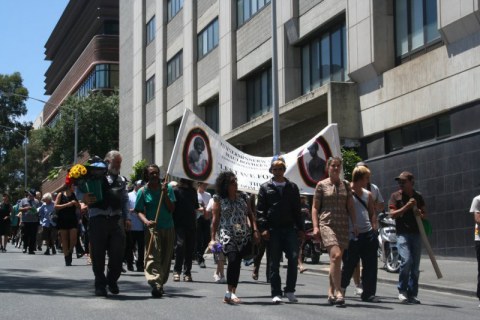 Thankyou for reminding us that the white people invaded Australia. When people come from one country to another it is clearly invasion. Not as racists think is it settlement. In the coming inquisition against racists (I can hardly wait - perhaps I'll get a job as a torturer) we must always remember subtle distinctions such as those between invasion and settlement. Clearly racists do not have the capacity to discern such distinctions and for this they deserve to be punished (by, for example, having their articles hidden). Keep up the good work.

You let me invade your mind, I give you blood on your hands - can we call it a settlement?