Reprinted from the Workers Solidarity Network website. Striking cold store workers at Swift Australia voted against the latest in a string of condescending offers from management today, as Workers Solidarity Network members and union activists assembled at the site. The workers’ supporters blocked trucks throughout the day, sending a message to the company that endless stalling and bad-faith negotiation must end.Confident despite their five-week ordeal, the workers reminded those attempting to cross the picket that Swift cannot be allowed to set this precedent for the mistreatment of workers, and that ‘touch one, touch all’ applies now more than ever.

ACTU President Ged Kearney was present, promising to do all she could to get more union supporters down to the site and funds raised. The Western Suburbs Community and Union Coalition, as well as ANF, MUA, ASU, NTEU, CFMEU and CEPU members all came to show their support for the striking workers, even helping to block trucks. All promised to return tomorrow with extra support.

Some workers, while appreciative, questioned why this community support was so long coming. Indeed because the call for community help has come so late in the dispute, it is crucial that all supporters go now and stand on the picket line alongside their friends in Brooklyn.
Post published Monday 10th January 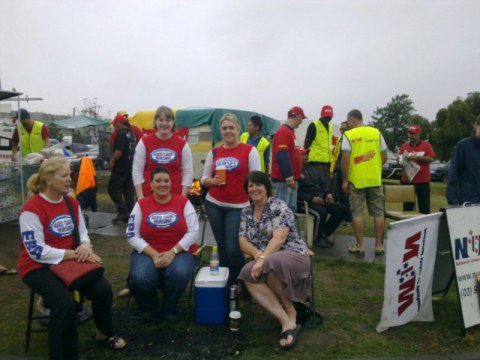 Facebook Update from Workers Solidarity 11th January
Thanks to the unionists who blocked trucks and scabs at Swift in Brooklyn today, and congratulations to the workers who took control of the decision-making process and demanded their voices be heard by the company, their union and their supporters. BUT tonight the company will try to undo the hard work we have done. Jo...in the nurses, construction workers, activists and others on the line tonight blocking scab trucks!

Another Facebook update from Workers Solidarity 11th January
This is now very urgent. They are attempting to remove the cold store contents in large container trucks!

Swift cold store workers won their dispute today. They held onto their eight hour day and penalty rates, rights no other workers at Swift have anymore. Congratulations to these brave men and women and well done to all the unionists and activists who helped make it possible! The workers united will never be defeated!

In an intersting counter argument to the NUW and Workers Soldidarity - the WSWS has labelled the dispute settlement a sellout.

The National Union of Workers (NUW) has orchestrated a sell out of the protracted struggle waged by cold storage workers at JBS Swift meatworks in Melbourne’s western suburb of Brooklyn. The workers were locked out of their workplace on December 3 after they rejected Swift’s attempt to slash wages, but were then deliberately isolated by their union for nearly six weeks. They returned to work yesterday after the NUW rammed through an “in principle” agreement on a new enterprise bargaining agreement that accepts a number of the company’s key demands.

A meeting convened outside the plant yesterday to vote on the proposed deal was attended by just 71 of the 136 locked out workers. Many workers were forced to leave the picket and accept other employment because the NUW paid no weekly strike pay during the six-week lockout, just a few irregular instalments of a miserly $250 each. This pittance was unable to sustain many of the workers over the Christmas period, including those with young families and mortgages, who were also denied access to welfare payments because they remained officially employed. One worker told SBS News: “Our Christmas was non-existent because our income is zero. Personally I had a house loan and I had to pull out of it last week because I don’t know if I’ve got a job.”

Another worker contacted by the World Socialist Web Site said that no-one from the NUW had notified him that a discussion and vote was being held, meaning he was unable to participate. It is unclear how many others were kept in the dark. Of those who were involved, a significant minority opposed the union sell out, with 50 in favour of the agreement and 21 opposed.

None of the workers has yet seen the full deal agreed by the union. Before the vote was taken, the workers at the meeting were given only a brief half-page summary of the proposed changes. According to the summary, the NUW has agreed to the company’s demand for a mere two percent annual wage increase over the two year agreement. This represents a real wage cut, as cost of living increases are significantly higher than two percent, especially in areas such as housing, transport, utilities, and food costs. This year, the Swift workers will receive an hourly wage of between $17.48 and $21.66—extremely low, despite the onerous conditions in the plant, where many spend much of their shift in minus 15.6 degrees Celsius conditions.

The NUW also agreed to changes to shift times and overtime arrangements, likewise aimed at cutting Swift’s wages bill. The company had initially demanded that shifts be extended from 8 hours to between 9.5 and 12.6 hours, including on weekends. Under the return to work terms, “the company may choose to introduce 9.5 hour shifts by volunteers only or new starters”. Moreover, a 9.5 hour “voluntary” shift on Saturdays will be paid at just time and a half, not double time as previously.

These measures will leave many workers significantly worse off, above all those who depend on overtime payments to supplement their base rate of pay. Nine and a half hour shifts will quickly become the norm—anyone refusing to “volunteer” for such an arrangement will no doubt be targeted by the company, while the absence of any restrictions on such shifts for new hires will simply encourage Swift to replace its existing workforce. Many of the current workers who insisted on maintaining the eight-hour day at the plant have young children, and cannot work extended shifts because of childcare and school arrangements. Others who already frequently work more than eight-hour shifts will lose one and a half hours of penalty rates each day.

Despite all this, the NUW has trumpeted the deal as a great victory. On its website, the union failed to publish the details of the concessions it had agreed to, instead declaring that the agreement would “protect workers’ penalty and overtime rates” and “preserve the family friendly nature of the workplace”. These claims are patently false.

The union-company deal was stitched up under the cover of a coordinated mobilisation of trade union bureaucrats, in order to place maximum pressure on the Swift workers to agree to it. In the final few days before the sell out, the NUW organised a so-called community picket, attended on Tuesday by Australian Council of Trade Unions President Ged Kearney and officials from the NUW, Australian Nursing Federation, National Tertiary Education Union, and Australian Manufacturing Workers Union (AMWU). Self-styled “militant” Craig Johnston, former head of AMWU “Workers First” faction, was among their number, while former “radical” and Construction, Forestry, Mining and Energy Union official Dave Kerin led proceedings. Several cold storage trucks were turned away, together with a group of scab workers Swift had mobilised over the previous six weeks. Television news crews were on hand, with a chorus of pro-union chants trotted out whenever the cameras came close.

The event was a cynical attempt by the NUW and the rest of the unions to posture as defenders of the workers and their struggle. In reality, since they were locked out by Swift on December 3, the NUW has completely isolated its members, claiming could not interfere with the company’s scabbing operation as this would breach the Labor government’s Fair Work industrial relations laws. One Swift worker bitterly told the WSWS: “Before the strike started, the union said that we were going to get 600 joining us on the picket and that the media was going to be there. But when the strike started nothing happened. Something should have been done ages ago. We were out all of December.”

The “community picket” is becoming a familiar modus operandi of the unions, providing a show of support for workers under attack while union officials do their utmost behind the scenes to facilitate the company’s demands. At Visy in Dandenong last month a similar community picket was broken up by mass arrests as part of an orchestrated attack by police, in collaboration with the company, on the Visy workers. In exchange for the company dropping charges against the workers, the union came to an “in principle” arrangement, rammed it through mass meetings, and then hailed it as a “victory”. Just as at Swift, the Visy workers will see no details of the deal until February.

In a revealing incident, in the midst of the “community picket” last Tuesday, NUW bureaucrats accosted WSWS correspondents as they were discussing the political issues involved in the struggle with Swift workers. NUW Victorian Assistant Secretary (and former state Labor parliamentarian) Esmond Curnow started screaming at them to get off the picket line, hysterically denouncing the WSWS article that was being distributed (“Australian meat workers locked out in dispute over wages and conditions”). Curnow shouted that if the correspondents failed to leave the picket immediately, he would get the police. Five cars and one van of police officers were parked at the side of the picket. Shortly afterwards, Curnow was seen talking to police before he left the vicinity.

Curnow’s outburst pointed to the union’s sensitivity over the WSWS exposure of its imminent sell out. The article directly warned the workers about the NUW’s manoeuvres and outlined an alternative perspective for advancing their struggle, in direct opposition to the unions. This could not be tolerated by the NUW as it cut across the very purpose of its “community picket”.

While Curnow was able to incite a small group of workers against the WSWS correspondents, who refused to be intimidated by the bureaucrat’s threats, others later expressed their opposition to what had happened. One said: “When you came there, the union official didn’t like you but there is no reason to carry on like that.” Another said that he had been told not to speak with the WSWS. “I don’t agree with that,” he said. “I will decide who I talk to and who I don’t. I’ll make up my own mind.”

The Swift sell out once again underscores the unions’ function as industrial police, enforcing corporate demands for ever lower wages and greater productivity and profits. In the manufacturing sector these demands have centred on an offensive for higher levels of casualisation and the elimination of overtime penalty rates. In Swift, Visy, and the recent Prysmian dispute in Sydney, the unions have played the key role in sabotaging workers’ resistance and delivering on behalf of big business.

The sell out of the Swift picket stands as a serious warning to workers everywhere confronted with the need to defend their jobs, conditions and living standards. No struggle can be sustained without a new political orientation, based on a socialist and internationalist perspective that expresses the needs and interests of the working class itself. This requires a fundamental break with the trade unions and their corporatist and nationalist program, and a conscious political fight against the Gillard Labor government, which has backed the employers to the hilt. It means the establishment of independent rank and file committees, that will seek to unite the struggles of workers throughout Australia and internationally against the capitalist profit system and for a workers’ government, which will bring companies like JBS Swift under social ownership and the democratic control of working people.