Queensland Friends of the Earth Press Release 29th December 2010: Queensland's environmental regulator the Department of Resource Management (DERM) is powerless to stop flood waters creating massive pollution from mine sites across the state. Mines will be releasing huge amounts of heavy metals into the flood waters and much of this will pile up behind weirs in catchments like the Fitzroy and be a pollution problem for many years. Pollutants include dangerous levels of copper, uranium, zinc, aluminium, lead, arsenic, cobalt and nickel.

Related: Wiradjuri elder warns of risk of groundwater poisoning from gold mine at Lake Cowal

Even more worrying, flooding of coal seam gas areas is undoubtedly over-topping holding ponds containing large amounts of salty water. Once this salt hits the high clay content black soil plains of the Darling Downs it is likely to destroy the ability of these fields to produce again since salt on soil containing more than 30 per cent clay renders such soil unproductive.

Friends of the Earth spokesperson Drew Hutton said this was the third year in a row that major flooding had caused serious pollution events. In 2008 the Ensham coal mine in central Queensland was flooded and heavy metals were released into the Fitzroy catchment. In 2009 the Lady Annie copper mine in north Queensland released large amounts of heavy metals when its tailings dam was breached.

These events were possibly the biggest pollution events in the state's history.

"The mining industry's claim that dilution solves all these problems is fanciful," Mr Hutton said.

"The dilution effect will offer some diminution of the damage but the heavy metals released from mines will lodge behind any obstructions in the river system and stay in the sediments, ready to be mobilised and the salt from coal seam gas operations will ruin good farmland.

"It is illegal for mining companies to cause such high levels of pollution but all the State government can do is approve these releases and hope for the best.
http://lockthegate.org.au/news/display/2057 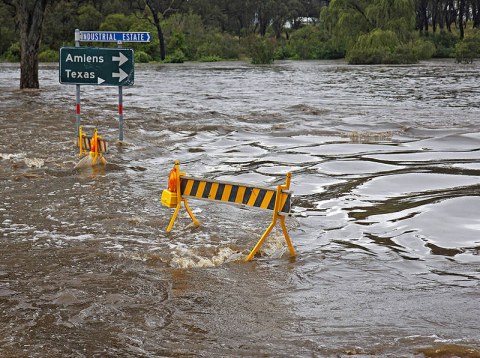 Plastic bags and other plastics, paper varieties and a whole range of other household waste turns into dioxin, the second-most toxic chemical after radioactive waste, when burnt.
That’s the risk posed in the Sunshine Coast rural hinterland by a council move to allow hard-to-access remote properties to opt out of wheelie bin rubbish collection.
A former Noosa shire councillor, Steve Walton, believes people on outlying properties will incinerate waste, producing dioxin which will be breathed in and will get into rainwater as it’s harvested into tanks.
He talked to me about his concerns on Noosa Community Radio. Hear the interview at http://www.noosacommunityradio.org/dioxin-risk-from-garbage-collection-o... .
There’s a very famous case of hundreds of people being poisoned by dioxin released in an industrial accident near Milan, Italy, in 1976. Hundreds of people were hospitalised, thousands of animals slaughtered, hundreds of people left with pockmarked skin. See http://www.google.com.au/search?q=seveso+italian+dioxin+crisis&rlz=1I7GG....