An Australian scientist has warned against misinterpreting the cold spells in Europe and North America and the heavy rains and flooding in Australia as climate change not occurring. Barrie Hunt, an Honorary Research Fellow with the CSIRO Marine and Atmospheric Research, said that seasonal cold spells will still be expected under enhanced greenhouse conditions and that the long term trend is that the global climate is warming.

“Despite 2010 being a very warm year globally, the severity of the 2009-2010 northern winter and a wetter and cooler Australia in 2010 relative to the past few years have been misinterpreted by some to imply that climate change is not occurring,” said Mr Hunt.

“Recent wet conditions in eastern Australia mainly reflect short-term climate variability and weather events, not longer-term climate change trends. Conclusions that climate is not changing are based on a misunderstanding of the roles of climatic change caused by increasing greenhouse gases and climatic variability due to natural processes in the climatic system."

Rain and flooding to many parts of south eastern Australia in the later half of 2010 has broken a record 13 year drought. The strongest La Niña in the pacific seen in the last 50 years has brought much of the rain. September set a record as Australia's wettest month on record.

“This is one of the strongest La Niña events in the past half century, and will likely persist into the northern hemisphere summer,” says Bill Patzert, an oceanographer and climatologist at NASA’s Jet Propulsion Laboratory. “Climatic impacts include heavy rains and flooding, which has damaged crops and flooded mines in Australia and Asia. It also has resulted in flooding in northern South America and drought conditions in Argentina. This powerful little lady is spreading her curses and blessings across the planet. She’s the real deal.”

Barrie Hunt said that model simulations of climate support recent observations that in addition to climate change linked to human activity, natural weather variability produce periods where the global climate can be either warmer or cooler than usual. Some natural temperature variations can last for 10 to 15 years. His research has been published in the international journal Climate Dynamics.

According to his climate model simulations Barrie Hunt said that seasonal cold spells will still be expected under enhanced greenhouse conditions with monthly mean temperatures up to 10°C below present values were found to occur over North America as late as 2060 in model simulations, with similar cold spells over Asia. Variations of up to 15°C below current temperatures were found to occur on individual days, even in 2060, despite a long-term trend of warming on average.

“These results suggest that a few severe winters in the Northern hemisphere are not sufficient to indicate that climatic change has ceased. The long-term trends that characterise climate change can be interpreted only by analysing many years of observations.”

The extreme cold conditions experienced in Europe and North America in December 2009, and now December 2010 is due to a strongly negative Arctic Oscillation weather system - a climate pattern that influences weather in the northern hemisphere. Global warming has seen Northern Canada and Greenland experiencing exceptionally warm temperatures forcing cold air south to the mid latitudes. The Arctic climate is warming at unprecedented rate due to Global Warming.

“Future changes in global temperature as the concentration of greenhouse gases increases will not show a simple year-on-year increase but will vary around a background of long-term warming. Winters as cold as that recently experienced in the Northern Hemisphere, however, will become progressively less frequent as the greenhouse effect eventually dominates,” Mr Hunt concluded.

The scientific record shows an underlying warming trend, reflected in the projections of future climate and the observation that the past decade has been the warmest in the instrumental record, with 2010 likely vying with 2005 as the warmest year on record.

The continuing rains and flooding in Eastern Australia should not lead to climate action complacency with the CSIRO forecasting a trend for South Eastern Australia becoming drier due to global warming. This underlines a need to both adapt to what is now inevitable change and mitigate even greater changes. 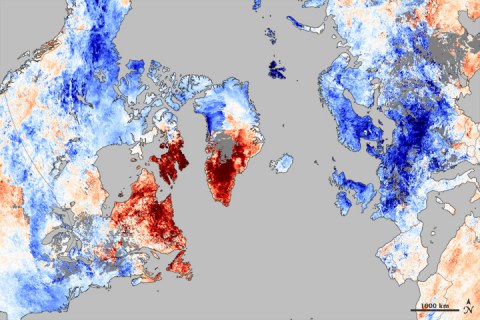 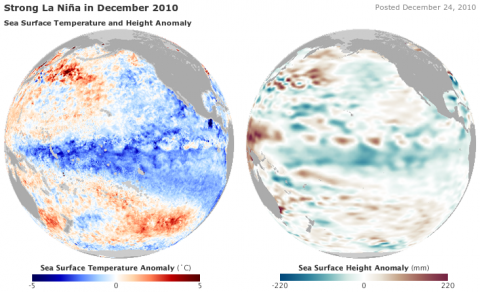