Several hundred people took part in a rally and march organised by the Refugee Advocacy Network (http://refugeeadvocacynetwork.org)to demand an end to the policy of mandatory detention of asylum seekers arriving by boat. MC Pamela Curr introduced a series of strong speakers, including a late addition to the list in the person of Malalai Joya, former member of the Parliament of Afghanistan now in exile; others were Michele O'Neil of the TCFUA, Greens candidate for the seat of Melbourne Brian Walters, Greens senator Sarah Hanson-Young, State Labor MP Hong Lim, Sister Brigid Arthur of the Brigidine Asylum Seekers Project, and Gilios, a refugee from West Papua and representative of refugee support group RISE (http://riserefugee.org/). The rally began at the State Library and ended at Federation Square after a march down Swanston Street. There is a fuller report on Melbourne Protests - http://melbourneprotests.wordpress.com/2010/11/10/end-mandatory-detentio... Sister Brigid's speech amd a message from Tamil refugees detained in Indonesia are attached here as MP3s, and there is video of Malalai Joya and the march on YouTube: 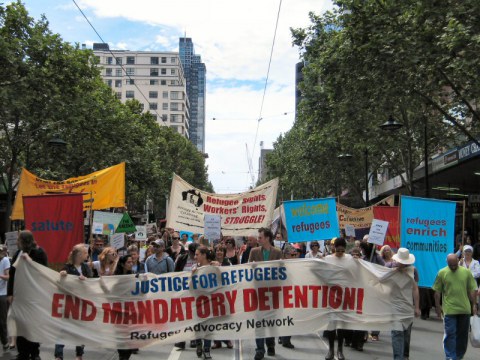