Speaking at a a Replace Hazelwood rally in a leadup to the Victorian state election on November 27, Professor Karoly told the crowd that "Hazelwood is only one of many power stations, but in fact the emissions are really, really important. Climate change causes warming; warming causes melting of ice and warming of the oceans; which cause sea level rise."

Karoly served as a lead author for the Intergovernmental Panel on Climate Change (IPCC) Working Group 2 (awarded the 2007 Nobel Peace Prize, jointly with Al Gore) and is a member of the faculty of the School of Earth Sciences at the University of Melbourne.

Hazelwood produces almost 15% of Victoria's greenhouse pollution and 3% of the nation's emissions. It is one of the most inefficient and most polluting coal fired power stations on the planet.

Sea level rise will cause coastal innundation and salinity changes and threaten widespread coastal agriculture and industrial infrastructure. It will cause some island nations like Tuvalu, the Maldives,and Kiribati to become first inhabitable, before they are eventually submerged altogether. (See The risks of Sea Level Change - Dr Peter Ward, professor of Biology and of Earth and Space Sciences at the University of Washington, Seattle.)

Premier John Brumby promised in July to close down a quarter of Hazelwood's capacity by 2014 as well as a generous feed-in tariff for large scale solar power. But a new coal fired station will also be built.

David Karoly stated clearly that to slow down climate change and avoid the damage due to the emissions from Hazelwood, then "We need to not just close a quarter of Hazelwood, we need to close Hazelwood completely. We need to do that now."

Environment Victoria estimated five thousand people attended the Replace Hazelwood rally which marched from the State Library to the steps of parliament house. The rally called on all political parties to commit to replacing all of Hazelwood power station within the next term of Government.

Environment Victoria Campaigns Director Mark Wakeham said: "Over the past 12 months Hazelwood has become the major environment issue of the state election. We've seen some policy movement from the ALP and the Greens, but now, 3 weeks out from the election, we need a clear plan from all political parties to commit to replace all of Hazelwood, Australia's dirtiest power station".

"So far, The Greens have promised to replace all of Hazelwood within four years, while the Labor Party has released a plan to close the equivalent of one-quarter of Hazelwood by 2014. The Coalition however has been almost silent on the issue and it's not at all clear where they stand," said Mark Wakeham

Community groups from around Victoria brought to the rally eight 3 metre high smokestacks, a replica of the now infamous Hazelwood towers. The smokestacks were carried through the streets to parliament house where they were symbolicly toppled. 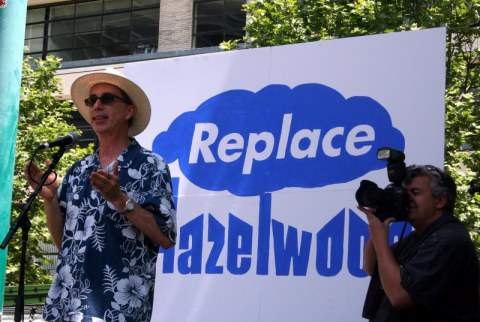 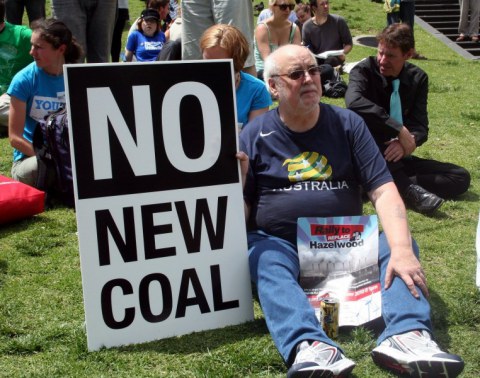 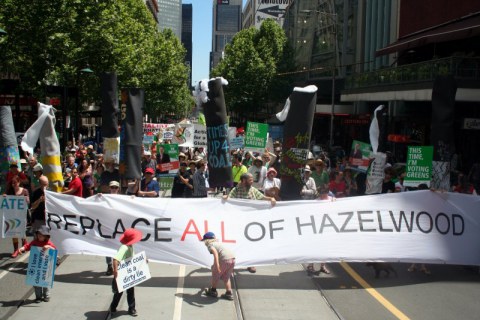 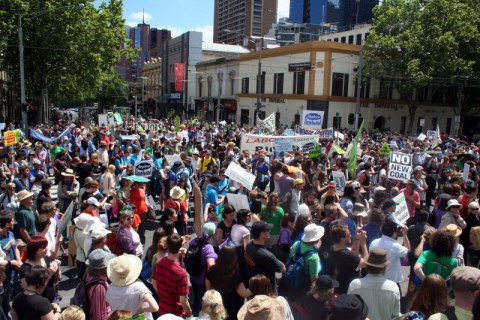 Takver you have only half the story on Kiribati and Tuvalu having lived there for many years the problem is not climate change.The problem started when a causeway was first built from Betio to Bairiki in Tarawa Kiribati it changed the currents and the Islet of Bikeman disappeared because of the change in current and when people went there for a picnic they pulled all the trees down for fire wood and the place disappeared.The people also removed all the sand from the beaches in Kiribati (Tarawa)and Tuvalu to make cement to build there houses when I was in Tarawa i would chase the people away from my beach and tell them don't remove the sand .After about three years the people from the village next door came to me and said I was right because my land was still there and theirs had gone.
There are parts of land that have disappeared on the next island north of Tarawa Kiribati called Abaiang where a causeway was also built instead of a bridge because it was a Aid project and for free just like the one in Betio built by the Japanese company Dia Nippon it also made the current change direction and land disappeared the flooding of land was man made but not climate change.
The proof that the sea level is not causing the land to flood is when you go to outer Islands in Kiribati this does not happen because no causeways have been built(except for the one in Abaiang ) and people do not pull sand off the beach If you go less than 20km south of Tarawa to the Island Maiana the land is not flooded.
Climate change may or may not be true but you can not blame the flooding in Kiribati or Tuvalu on sea level rise only on the people who are taking the sand away to build houses out of cement and concrete instead of the building local houses or importing sand from overseas to make concrete or cement.
Sorry to disagree with you but I feel the truth must be told.