To chants of “Coal, don’t dig it/ Leave it in the ground/ Time to get with it”, members and supporters of Darebin Climate Action Now marched from Northcote Town Hall to the office of local Labor MP Fiona Richardson to demand an end to the Brumby government’s pro-coal policies. They handed out leaflets calling on people to ‘Vote Climate’ in the upcoming election, and posing the question ‘Can we trust Labor on Climate?’, and also delivered a copy of Beyond Zero Emissions’ Zero Carbon Australia Stationary Energy Plan to the office.

This Thursday (28th Oct), we’re going to push our pushers, to make COAL HISTORY! In reality, it’s our kids that are really going to experience the full effects of climate change. It’s their future that we are fighting for as the impacts of climate change will be felt from this generation onwards, and more so for future generations. They don’t have a voice yet, but we are parents, grandparents, carers, friends, uncles, aunties, day care centre staff, cousins you name it, we do.

So join us this Thursday with the baby, toddler, child and the pram, and help us push the pusher with the MAKE COAL HISTORY banner down high st to the local member’s office Fiona Richardson. Labour is not taking climate change seriously (you only have to look at the new coal fired power plant they are funding with tax payers' money to see that), so it’s up to us to let them know it’s not good enough.

DCAN plans a series of protests at Fiona Richardson’s office during November, in the lead up to the State Election:

PROTEST every WEDNESDAY morning in November up to election…..

DCAN are organising a series of protests outside Fiona Richardson’s office on Wednesday mornings to protest the double standards being pushed by the Brumby Government.

You want us to trust that you will take action on climate change this time. You hope we’ll be impressed by your offer to (maybe) close a quarter of Hazelwood power station, Australia’s dirtiest.

But you are offering $50 million of taxpayers money to open a new fossil fuel power station that would cancel out all the emissions saved.

If you were genuine, you would replace ALL of Hazelwood and not support the building of a new, dirty, coal power station.”

It’s clear that Brumby and hence Fiona Richardson are not serious about doing what needs to be done to deal with the threat of climate change. Their double standards and political weakness risk serious climate change impacts for us and especially our kids.

So, please join us in sending a message outside Fiona Richardson’s electoral office on every Wednesday morning in November leading up to the election from 8am to 9am. The first protest was great – with lots of support from people on their way to work! Come and give us hand on your way to work too….. 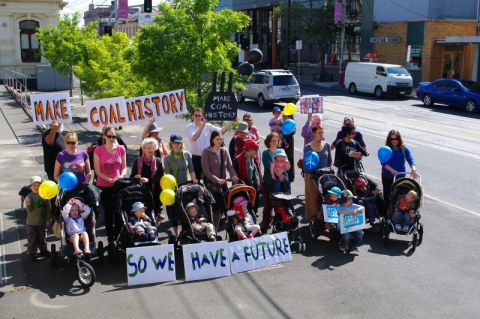