A new report into the changing climate of South East Australia and particularly the Murray Darling Basin indicates an increasing risk of below average rainfall and runoff into streams and generally drier conditions. The change in the climate has, at least in part, been attributed to an increase in atmospheric anthropogenic greenhouse gases associated with global warming.

The South Eastern Australian Climate Initiative (SEACI) report: Climate variability and change in south-eastern Australia, highlights the effects of climate variability and change on the water resources of the south-east which should have major implications for water allocations planning currently under consideration by the Murray Darling Basin Authority and in community hearings. The research was undertaken by the CSIRO and Bureau of Meteorology.

Welcome rainfall across much of the Murray Darling Basin this year has resulted in drought classifications being lifted in NSW and Victoria. The rain and local floods ended an unprecedented 13 year drought period. The drought was significant in largely being constrained to southern Australia, with lower year to year rainfall variability, and a change in the seasonal pattern of rain with a marked decline in autumn (a noteable difference to previous drought periods), as well as winter and spring. There were extreme reductions in runoff, greater than were expected.

"The research indicates that these changes can be linked to global warming, making it a likely contributor to the recent drought." said CSIRO's Dr David Post, SEACI Program Director, "While 2010 has brought welcome rains for much of south-eastern Australia, there is growing evidence from SEACI research that a long-term trend towards a drier climate is taking place,"

Victoria has experienced a 13 per cent reduction in rainfall over the Goulburn-Broken, Campaspe, Loddon-Avoca and Wimmera basins in the period 1997-2006 compared to long term averages, with computer modelling showing an extreme decline in annual streamflow of 44 per cent compared to the average (1895-2006). Streamflow decline was estimated at 23 per cent during the World War II drought, and 27 percent during the Federation drought.

The report says the "very low autumn rainfall and low winter/spring rainfall is linked to rising temperatures and associated changes in the large-scale circulation of the atmosphere. These effects are evidenced by the increasing intensity of the sub-tropical ridge (the high atmospheric pressure cells that tend to persist across southern Australia and are characteristic of the region's prevailing climatic conditions). A climate modelling study showed that the observed intensification of the sub-tropical ridge can only be achieved when anthropogenic greenhouse gases are included in climate models."

"Changes to large-scale atmospheric circulation patterns are impacting on rainfall and runoff in the south-east, particularly in the southern Murray-Darling Basin and Victoria." said David Post, "The research indicates that these changes can be linked to global warming, making it a likely contributor to the recent drought."

The report also noted that natural climate variability also should be considered as a contributing factor to the rainfall and runoff decline.

"The next three years of research under Phase 2 of SEACI aim to improve our understanding of the extent to which these changes can be attributed to climate change; to improve projections of the impacts of climate change on water resources; and to advance seasonal forecasting of climate and streamflow," Dr Post said in the CSIRO media release.

The report makes clear that south eastern Australian climate is affected by the variability of a number of large scale weather factors including the El Niño Southern Oscillation (ENSO), the Indian Ocean Dipole (IOD) and the Southern Annular Mode.

The CSIRO and Bureau of Meteorology have warned for several years that overall Australia to get hotter, wetter, with more extreme weather and that south eastern and south western Australian regions are showing a definite trend of changing to a more drier climate. 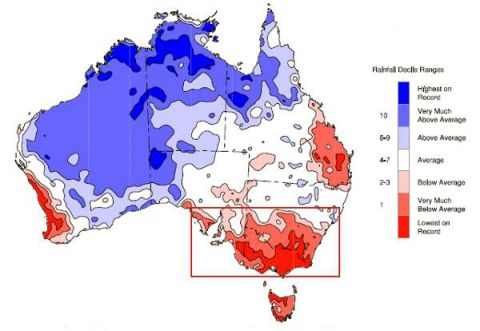