Hundreds of activists travelled to the Hazelwood brown coal fired power station, 180 km east of Melbourne, for the 101010 global work party on Sunday.

Environmental groups in Victoria are behind a campaign to replace the aging Hazelwood power station with renewable energy. Premier John Brumby wants to close the power station down in stages and wants Federal Government financial assistance in doing so. But the new Federal climate change minister Greg Combet is decidedly cool on the idea.

The Switch Off Hazelwood organisers are calling for:

The protest at the power station was peaceful with up to 300 protestors and about 250 police. Speeches were made, a march was held, street theatre of erecting a solar power tower with 170 heliostats was played out, live music and dance. And at about 4:00 pm everyone quietly went home. Read a full report of the Hazelwood convergence at Indymedia.

But the battle to close Hazelwood is being played on multiple stages.

Greg Combet said yesterday in Melbourne "Well the Victorian government has its priorities and the Federal Government has our priorities too and I certainly mean no criticism of the Victorian government's efforts to reduce emissions, because they've put forward very strong climate change policy but the Federal Government's priority is in three areas; supporting renewable energy; in energy efficiency and in working towards the introduction of a carbon price, so that's what we'll be focusing on."

Environment Victoria Campaigns Director Mark Wakeham expressed disappointment at the lack of interest by the Federal Government in retiring Hazelwood. "Replacing all of Hazelwood could reduce Australia's emissions by 2.5 per cent, so if Minister Combet is serious about achieving rapid emission reductions this should be a priority" he said.

"The Federal Government found $394 million to fund 'cash for clunkers' and is providing $100 million to HRL, the developers of a new coal-fired power station in Victoria, yet they can't find a cent to close our most polluting power station," said Mark Wakeham.

John Brumby has committed to a staged closedown, "We would prefer to work with the Federal Government, but if we're not able to reach agreement with them, we will achieve this on our own. " he told ABC radio PM.

"With both the Victorian Government and the power station's owners seeking Hazelwood's closure it should be a no-brainer ahead of the introduction of a price on carbon. Once again it appears that the Gillard Government has stage-fright when it comes to making strong decisions on climate change."

The pressure is on the State Government in the lead up to the State election with a further rally to Replace all of Hazelwood on Saturday 6 November at 1pm at the State Library, cnr Swanston and Latrobe Streets, Melbourne.

"Ahead of the state election, we're urging all parties to develop a clear plan to replace the entire power station during the next term of government. Failing to help replace Hazelwood would be a cop-out from the Gillard Government, but for the sake of our climate the closure must go ahead regardless. Allowing three-quarters of Hazelwood to go on polluting indefinitely is unacceptable" concluded Mr Wakeham. 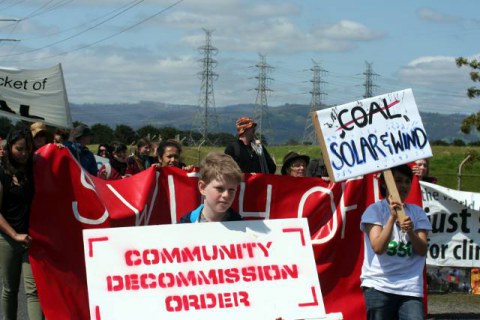 Re: Combet cool on Hazelwood closure

Why on Earth did the Gillard government pick Greg Combet for Climate Change Minister? Combet is no doubt a fine man, with a fine union background, in the coal mining industry. As a qualified coal engineer, he doesn't seem at all qualified for a job about climate and environment.

I guess the government picked Combet for the same reason that they picked Don Argyle, and others, from BHP Billiton. to be the top advisers on mining tax policy.

I can only conclude that both Labor and Liberal's priorities are to first please the big mining corporations.
Australia's climate change future is not a high priority

In an interesting response from the CFMEU reported in the Age, Steve Roach from the CFMEU correctly highlighted the flaw in basing a policy of closing Hazelwood around compensating International Power

''We don't want millions of dollars of Victorian taxpayers' money put in the pocket of a foreign company, which is just going to walk off overseas with it, while the workers are left destitute … in an area that has been hit from pillar to post in the last two decades.''

The compensation that International Power are asking for has been estimated at half a billion dollars. Why not regulate Hazelwood out of existence using the EPA and use that money instead to build renewable energy technology and to compensate the workers instead so they can start new financially secure careers!
No compensation for corporate criminals and investment in the Latrobe Valley community and workers instead!